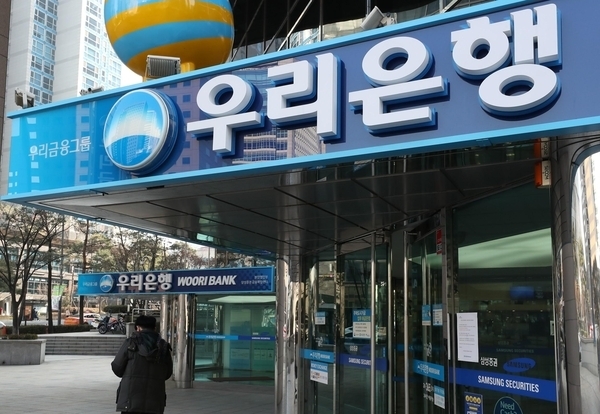 A pedestrian walks past a Woori Bank branch in Seoul (Yonhap)
South Korea’s financial regulator’s plan to allow nationwide post offices to work as brick-and-mortar branches for commercial banks here continues to face major hurdles as the plan has been stalled for nearly two years.

On Monday, the Financial Services Commission mentioned its plans to review post offices and other similar institutions that could partner up with lenders in offering offline banking services, in its 2022 annual plan. The plan is part of its efforts to narrow the gap in financial polarization among consumers and help resolve any difficulties they face with the bank’s disappearing brick-and-mortar branches.

At the moment, only five banks – the state-run Industrial Bank of Korea and Korea Development Bank alongside Hana Bank, Citibank Korea and Jeonbuk Bank – have partnered up with post offices in offering the most basic services focused on cash deposit and withdrawal to its customers. Of the five, Citibank Korea is likely to pull out of the deal, as it decided last year to pull the plug on its retail banking business.

The wider post office-bank partnership deal, however, is a plan that has failed to materialize after first mentioned by the FSC back in 2020, when the FSC announced its “measures to build an elderly-friendly financial environment.” At the time, the FSC pointed to a total 2,655 post offices across the nation, which accounted for 40 percent of a combined 6,711 offline branches operated by commercial banks here.

The plan has yet to make any significant progress, with the state-run postal service operator Korea Post and the commercial banks reportedly unable to reach agreement on the deal.

An employee at one of the four major commercial banks, under the condition of anonymity, said that the lenders wanted their offline services to be offered exclusively by post offices in rural areas, with most of their remaining brick-and-mortar branches concentrated in metropolitan areas, especially Seoul. The Korea Post, on the other hand, wanted a nationwide deal, the employee added.

Commercial banks’ closing of brick-and-mortar branches to focus on mobile and online services and utilize artificial intelligence-based tellers to deal with their customers has risen as a major issue for those unfamiliar with the technology.

A Financial Supervisory Service data obtained by an opposition lawmaker here on Feb. 2, showed that a total 1,507 offline branches were shuttered by banks operating in Korea from the beginning of 2016 to October 2021. Some 240 branches were closed in the January-October period of 2021 alone. Of the banks, Hana Bank closed the most branches with 304, while KB Kookmin Bank shuttered 225, coming at No. 2, in the cited period. The big four banks – KB Kookmin, Shinhan, Hana and Woori -- closed a combined 60 percent of the total 1,507 branches, in the period.

But in the meantime, banks have come up with a different solution to deal with the declining offline branches: partnering up with convenience store and supermarkets. The partnership is still in its early stages with only Hana and Shinhan having jumped in the game, but onlookers say the new form of deal has more potential than the FSC‘s.

Shinhan Bank said Monday it plans to open the second of such “branch” next month in a supermarket operated by GS Retail in Gwangjin district, located in eastern Seoul. A state-of-the-art automatic teller machine with an AI teller and can provide basic banking services will be installed within the bank. The bank already operates a similar “bank-in-shop” branch inside a GS convenience store in Gangwon Province.

Last year, Hana Bank joined hands with BGF Retail, the operator of the CU convenience store chain, and installed a similar ATM machine that allows customers to handle a variety of banking needs, including opening accounts and security card issuances in a CU store in Seoul.