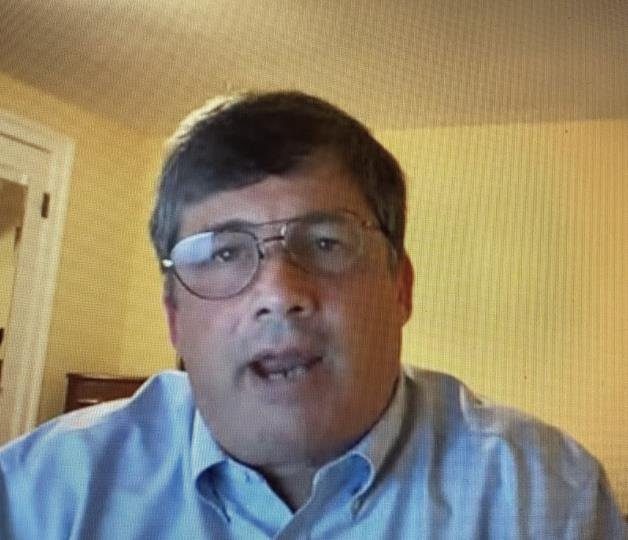 This photo, taken on Sept. 23, 2021, shows Mark Lambert, deputy assistant secretary of state for Korea and Japan, speaking during a forum hosted by the Institute for Corean-American Studies (ICAS).

A US diplomat on Tuesday did not rule out the possibility of the economic and security fallout from a conflict between Russia and Ukraine on Asian countries like South Korea.

Speaking during a virtual forum, Mark Lambert, deputy assistant secretary of state for Korea and Japan, said the world is "so intertwined" when asked if there could be a role for Seoul to play in defusing the standoff over Ukraine.

"It is also important that the countries of Asia make it clear to Europe that countries like Korea are looking at what happens in Europe and how it affects the economic prosperity and security of this region," Lambert said in the forum hosted by the Korea-US Alliance Foundation and Korean Defense Veterans Association.

"The world is so intertwined, and the days of when a country or a leader can go off and think that well, most of the planet won't pay attention to this, I think, are over," he added.

His remarks came amid speculation that the US could try to piece together support from South Korea, Japan and other allies and partners should Russia invade Ukraine to initiate a full-blown war.

Lambert, however, pointed out that it is up to each individual country to determine what to do in response to the European crisis.

"I would leave to the leadership at Blue House ... specific things the Republic of Korea or Japan wishes to do in response to something that we're all hoping doesn't take place," Lambert said, referring to South Korea's presidential office.

The Russia-Ukraine standoff was a "key topic" of weekend discussions in Honolulu among South Korea's Foreign Minister Chung Eui-yong and his US and Japanese counterparts, Antony Blinken and Yoshimasa Hayashi, the diplomat said.

"If you read the trilateral statement, it made very clear that all three foreign ministers called out our shared concern, that Ukraine be respected, that the situation be resolved peacefully, and that Russians stop its provocative behavior," he said

Commenting on the US' drive to strengthen trilateral cooperation with its Asian allies, South Korea and Japan, the diplomat stressed the importance of fostering a "layer of trust" among the three countries.

The push for greater three-way cooperation has been impeded by historical antagonism between Seoul and Tokyo stemming from Japan's 1910-45 colonization of the Korean Peninsula.

"I think we should all collectively -- both those of us in government, but those of you who have previous government experience and also smart people from academia -- should be looking at things that we can do together to enhance trust and enhanced cooperation," he said. (Yonhap)