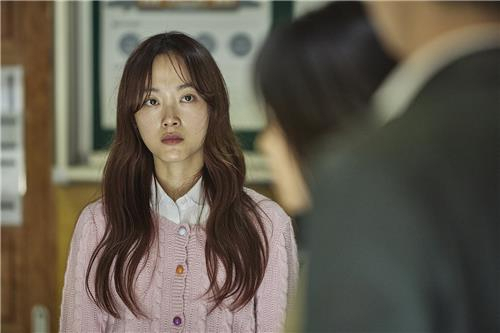 This photo provided by Netflix shows a scene from its Korean original series "All of Us Are Dead." (Netflix)

Lee Yoo-mi might be one of the luckiest actors in the world because she instantly skyrocketed to global fame for her roles in two highly successful Netflix dramas, "Squid Game" and "All of Us Are Dead."

In the sensational survival drama "Squid Game," released in September last year, Lee played Ji-yeong, or Player 240, a young woman who competes for the 45.6 billion won ($38.1 million) in the mysterious contest after being released from prison for killing her abusive step-father.

She took the role of Na-yeon in the coming-of-age zombie thriller "All of Us Are Dead," a privileged, spoiled teenage girl who looks down on her classmates from different backgrounds and constantly complains.

"The two shows are very precious and important to me. I've waited so long to watch them on screen," Lee said in a media interview on Monday. "I'm just happy right now. Everything is going far better than I first expected. I think I'm lucky."

But the characters Lee played in the two successful series are so different that the casting trick has become the talk of the town on social media. Those who watched "Squid Game" first were surprised by Lee's subverted character in "All of Us Are Dead."

Ji-yeong stands out among the Squid Game participants who display selfishness and survival instinct as she sacrifices herself to save her partner Sae-byeok (Jung Ho-yeon) in the sixth episode.

Her death after the marble game is considered one of the most heartbreaking scenes of the nine-part series.

In the "All of Us Are Dead," on the other hand, Na-yeon is one of the most disliked characters as she is unapologetic about her flaws and finally orchestrates the death of a classmate by intentionally infecting him with zombie virus.

"I've received so many curses and swearwords after 'All of Us Are Dead.' I think I will live long," said the 27-year old actress, laughing. "I think I'm very fortunate to show myself in extremely different styles in a short period of time."

Due to the difference of the characters, it was hard for her to act Ji-yeong and Na-yeon at the same time, while the filming of both "Squid Game" and "All of Us Are Dead" was held in the summer of 2020.

"I studied my characters in the car while moving to another location," she said. "When heading for 'All of Us Are Dead,' I filled something in myself. But on my way to 'Squid Game,' I threw them away from me."

Lee made her acting debut in 2009 as an extra in TV shows including the sitcom "Taehee, Hyekyo, Jihyun!" During her decadelong career, she has largely played supporting characters, who die or leave in the middle of the series as she did in "Squid Game" and "All of Us Are Dead."

She admitted that the larger-than-expected success of the two Netflix series will help her grab bigger roles that survive longer.

"I've got some offers for characters that live longer and never die. They are happier than any previous characters of mine," she said. "The most important and grateful thing is that the Netflix series gave me more chance to continue my acting career and experience more various roles in the future." (Yonhap)