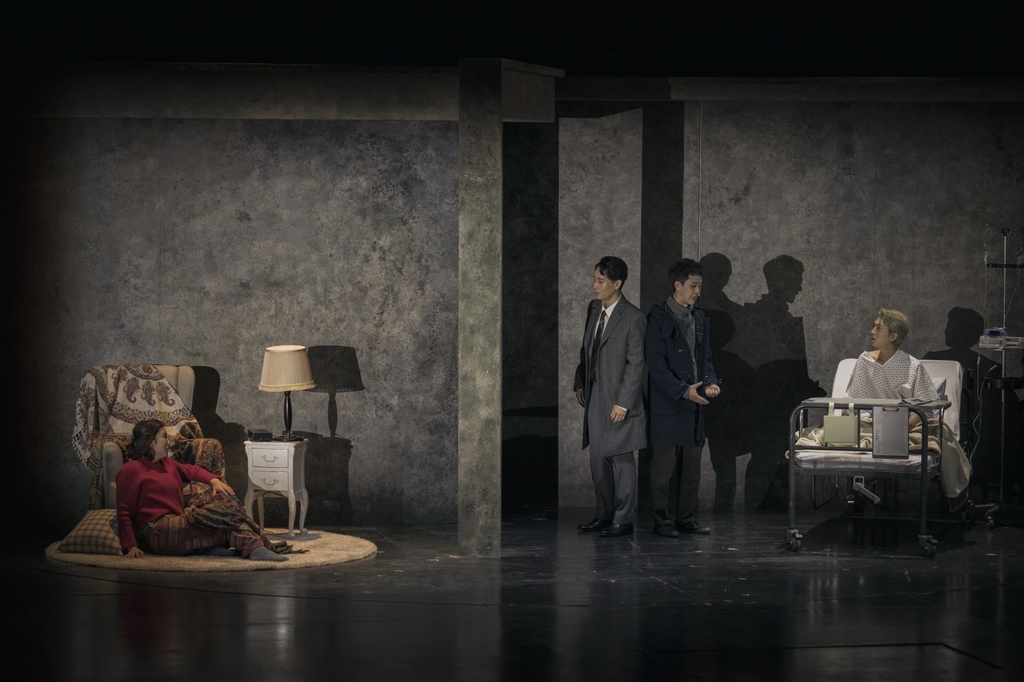 A scene from “Angels in America, Part One” (The National Theater Company of Korea)
While “short form” or “mid form” content which immerse audiences in a story with rapid plot developments appear to be an irreversible trend in movies and TV dramas, a number of stage plays have gone against the tide with productions that run as long as eight hours.

“Angels in America,” “The Brothers Karamazov,” and “The Geumjo Story,” are among the many recent works that are far longer than the typical play length of 80 to 100 minutes

“Angels in America,” which will launch its second part on Feb. 25, is a two-part play written by American playwright Tony Kushner. The original script deals with homosexuality, AIDS, racism, and religious issues against the backdrop of the US in 1985.

“It is an important play that had a great impact on American society. I contemplated many aspects of the play, especially how I would deliver its messages, but the length was not necessarily my concern,” Shin U-chung, director of the Korean production of the play, told The Korea Herald on Feb. 8.

Shin is known for his “longer-than-average” works such as “Wife” and “Scorched.”

“Regardless of its length, the story has the power to grab the audience,” Shin noted. “Consider it as binge-watching a Netflix show, except it is performed on a live stage.”

“The Brothers Karamazov” director Na Jin-hwan agreed that the power of captivating stories can defy any concerns about running times.

“Dostoevsky’s original work is more than 1,700 pages, so if the plot is abridged even slightly, it loses its essence,” the director said. “It takes a long time to properly convey its meaning with stimulating events and characters.”

“The Geumjo Story,” which will kick off in April this year, is also expected to be more than four hours long. Selected from an open script contest organized by the National Theater Company of Korea, the play illuminates the stories of individuals who lived through the Korean War, and is expected to last at least 240 minutes.

When compared with other stage performances like musicals that sell hundreds of tickets per show, these extra-long plays might not be megahits, but ticket sales of these plays is a testament to the niche demand.

“The Brothers Karamazov” was staged at 80 percent occupancy. Similarly, 4,500 seats for the four-hour production of “Angels in America Part One“ were sold on the first day of ticket sales last year. “Angels in America,” which featured well-known names such as Jung Kyung-ho, sold most of the total 7,500 tickets available for its month-long run at the National Theater Company of Korea‘s Myeongdong Theater that began Nov. 26, 2021.

“I witnessed again and again on social network services that there is also an audience that enjoys long plays,” Shin said.

A frequent theatergoer who has watched “Angels in America” said that seeing a show in person is important, especially when people are bombarded with short form content.

“It does require paitience to sit for a long time, but you lose track of time when the production and acting are great -- and this kind of experience is necessary,” Park Sang-young, an office worker in Seoul, said.

“Many people watch someone else’s movie review on YouTube and think they have watched the movie. But there are also people like me who want to see it and feel it firsthand,” she added.