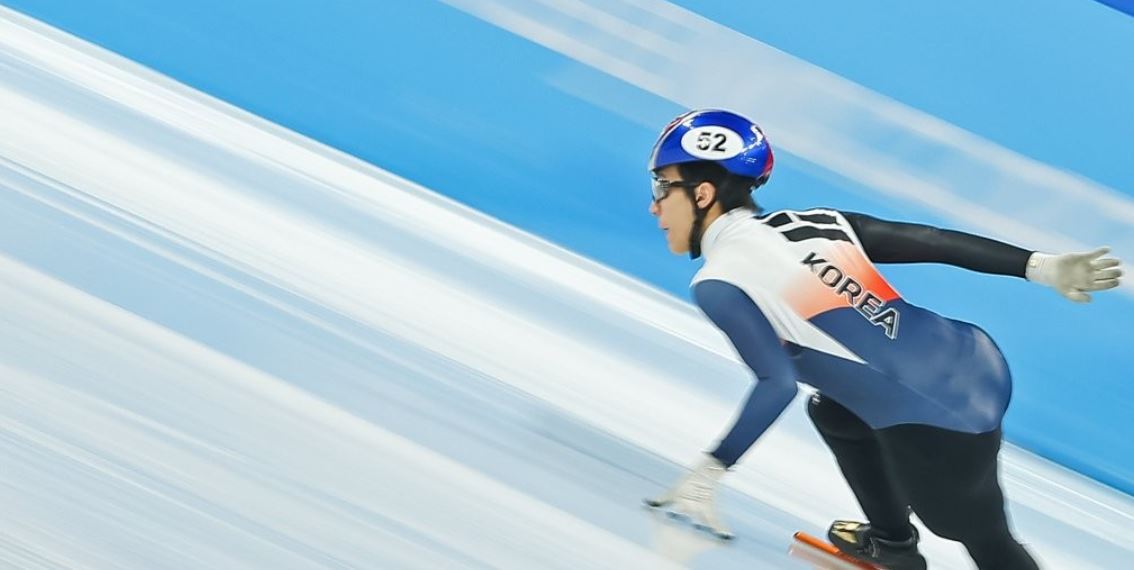 Hwang Dae-heon of South Korea competes in the final of the men`s 1,500m short track speed skating race at the Beijing Winter Olympics at Capital Indoor Stadium in Beijing on Feb. 9, 2022. (Yonhap)

Hours after being disqualified from the men's 1,000m short track speed skating race at Beijing 2022 on Monday, South Korean Hwang Dae-heon posted a quote from Michael Jordan on his Instagram.

It read: "Obstacles don't have to stop you. If you run into a wall, don't turn around and give up. Figure out how to climb it, go through it, or work around it."

In winning the 1,500m gold medal at Capital Indoor Stadium on Wednesday, Hwang did all of that. He didn't let obstacles stop him in his pursuit of an Olympic title. He skated over them, through them and, quite literally in this case, around them.

For Hwang, obstacles came in the form of what many South Koreans feel was biased officiating from that 1,000m race. After crossing the line first, Hwang was penalized for some phantom contact. Another South Korean skater, Lee June-seo, also got DQ'd for a foul. South Korea will make a formal appeal on the matter at the Court of Arbitration for Sport.

Hwang, though, still had races coming up. And by reminding himself of the quote from Jordan, widely regarded as the greatest basketball player of all time, Hwang said he was "determined to go my way."

"Sometimes, when we run into walls, we may lose confidence," Hwang said after winning his first career gold. "I decided I wasn't going to give up. I figured if I kept knocking on the door, it will ultimately open. My next race will be another door that I am going to try to open."

Amid the off-ice chaos surrounding him, Hwang kept on a brave face. He cracked a few jokes with reporters after Tuesday's training session, but he admitted Wednesday he was still struggling to come to terms with Monday's disqualification.

"I am human. I was not okay inside," Hwang said with a smile. "But if you keep telling yourself you're fine, then you're going to be fine eventually."

He said he had prepared a strategy that would leave little room for judging.

"I wanted to make sure no one would get their hands on me," Hwang said. "I learned from my experience on Monday. I was under a lot of pressure, but I think I skated an extremely clean race."

Indeed, Hwang made most of his passes, from the quarterfinals and all the way through to the final, on the outside corner, instead of cutting in on skaters in front of him and risking penalties.

"I am going to try to be even better," Hwang said. "The quality of competition has gotten so much better. I have to keep an eye on everyone. I have to be mistake free." (Yonhap)