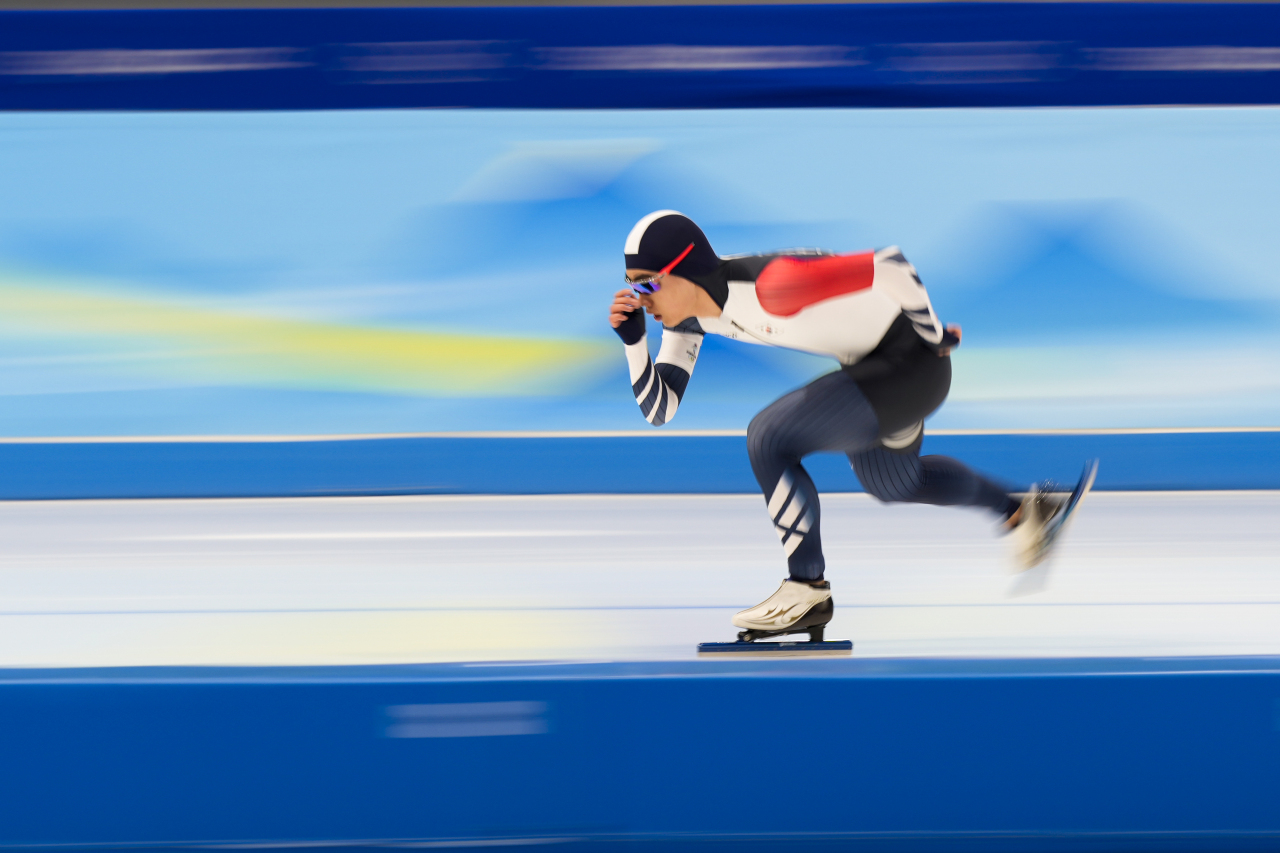 Kim Min-seok of South Korea skates to a bronze medal in the Men‘s 1500m Speed Skating event at the Beijing 2022 Winter Olympics on Monday. (UPI)
BEIJING -- South Korean speed skater Kim Min-seok is his own toughest critic. He doesn‘t usually pat himself on the back. Not even winning a second straight Olympic bronze medal, as he did in Beijing on Tuesday, changed that.

Kim is now the first Asian speed skater to win two Olympic medals in the men‘s 1,500m. But when he appeared in the mixed zone for a scrum with the media, Kim didn’t exactly look the part of an Olympic medalist.

He was his usual, soft-spoken self, no different than how he interacted with the press after training sessions here last week.

“I don‘t really give myself props for a job well done,” Kim said sheepishly. “I’d tell myself, ‘Hey, the bronze medal is good, but let’s do better next time.‘ I’d like to become an Olympic champion someday.”

In particular, Kim said he ultimately wants to topple Dutch skaters, who have long reigned supreme in speed skating.

“I just have to keep trying,” Kim said. “I am disappointed that I didn‘t get past the Dutch skaters this time, and I think this will be the fuel I need for the rest of my career.”

Kim shocked the skating world at PyeongChang 2018, when he came out of the blue to claim bronze in the 1,500m, which had long been dominated by European and North American athletes. Kim has previously acknowledged he himself was surprised that he won that medal in 2018. This year, his mindset was much different entering the race.

“I didn’t have high expectations for myself back then,” Kim said. “This time, I really wanted to win a medal, and I pushed myself harder.”

Skaters get paired with one another in Olympic speed skating. Kim had the tough draw of skating alongside Nuis, but he said he was able to keep the focus on himself.

“Just because the skater next to me was ahead of me, that doesn‘t mean I have to give in or lose steam,” Kim said. “As an Olympic athlete, it’s something I have to overcome. I stuck to my race and was able to finish well.”

Kim and Nuis were in the 11th pair, and there were eight skaters left, some of them pre-Olympic favorites, such as Joey Mantia of the United States and Ning Zhongyan of China.

But none of them topped the times posted by three eventual medalists. As he was watching the remainder of the competition unfold, Kim said he felt the first two places would be safe.

“I thought maybe someone would get in front of me, but the top two times were really good,” Kim said. “I figured the remaining skaters would be feeling some pressure. They are much better skaters than what their times showed today.”

At PyeongChang 2018, Kim watched six skaters try and fail to match his bronze medal-winning time. Back then, he was desperately hoping his time would stand.

“I was just thinking, ‘Whatever happens, happens,’” Kim said. “I knew I had done all I could on the track.” (Yonhap)