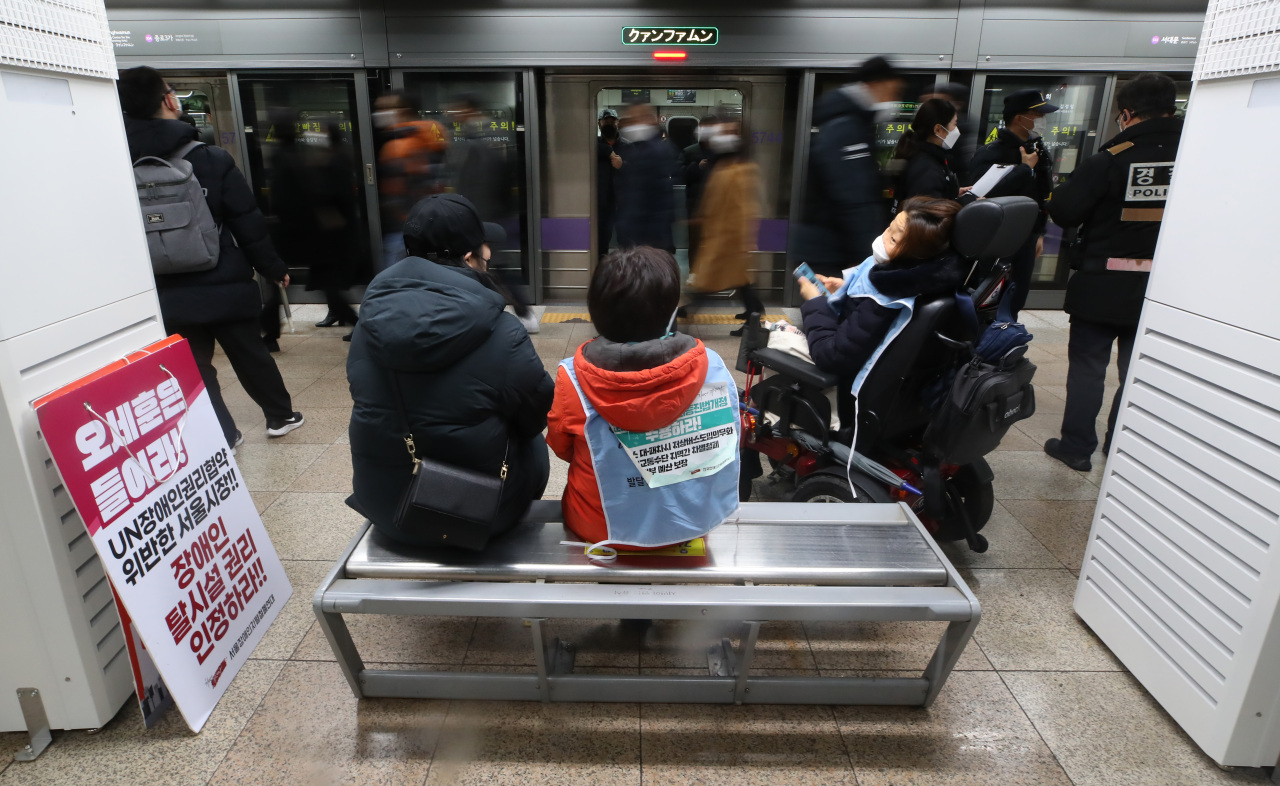 Members of the group Solidarity Against Disability Discrimination are sitting at a bench beofre staging a demonstration to call for mobility rights of the disabled at Gwanghwamun Station in Seoul, Dec. 20. (Yonhap)
An association of disability groups in South Korea is continuing their protest actions at subway stations, disrupting operations during the morning rush hour for the fourth weekday in a row.

On Tuesday, some members of the Solidarity against Disability Discrimination staged a rally at Chungmuro Station at around 7:30 a.m., demanding the government do more to help disabled people.

“The protest by the disability rights group, which was held on the morning of Feb. 8, ended at 10:18 a.m., but in the aftermath of the protest, there is a delay in the operation of trains on Line 3,” Seoul Metro, an operator of Seoul Metropolitan Subway, told citizens via Twitter.

Also on Tuesday morning, some showed up at other stations on Line No. 3 including Dongguk Univ. Station and deliberately put their wheels into the gap between the train and the platform, preventing the train from departing. The protest caused delays of five to eight minutes, according to the train operator.

Tuesday’s protest marks the seventh rush hour demonstration staged by the group this year. Other affected lines include Lines No. 2 and No. 4. They have been holding protests almost every day since Feb. 3.

The Solidarity against Disability Discrimination has been holding subway protests since last year, calling for additional public spending on support for disabled people, including on educational facilities and providing low-floor buses across the country.

In the latest statement issued by the group, it urged the National Assembly to pass the bill proposed by Rep. Cho Hae-jin of the main opposition People Power party, which would strengthen local authorities’ responsibility to provide lifelong education for disabled people.

“Lifelong education for the promotion of independent living and integration into the local community should be provided to individuals with disabilities who have extremely limited social participation,” the statement said. It added that only 1.6 percent of disabled people in Korea participate in lifelong education programs, as opposed to 43.4 percent of all adults here.

But some citizens harbor ill feeling against their persistent disruptions of public transportation, filing online petitions with the presidential office Cheong Wa Dae to call for punishment of the protesters.

“The strikes have taken away the valuable commute time of thousands of citizens. … I had to pay 15,000 won for a taxi to be on time for today’s important schedule,” a petition posted last Friday read. It had garnered about 1,000 signatures as of Tuesday.

Meanwhile, the police booked and investigated a leader of the group in January, on suspicion of violating the Assembly and Demonstration Act and the Infectious Disease Prevention Act and obstruction of general traffic.

Seoul Metro also filed a claim for damages worth 30 million won against groups involved in the protests in November last year.