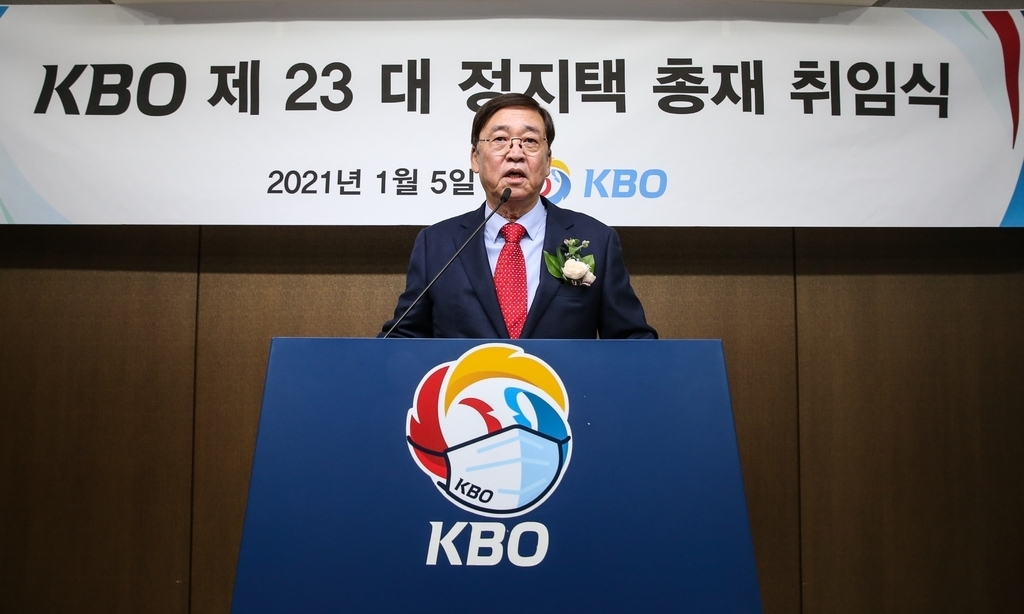 Chung Ji-taik, new commissioner of the Korea Baseball Organization (KBO), speaks at his inauguration ceremony at the KBO headquarters in Seoul on Jan. 5, 2022, in this photo provided by the KBO. (KBO)
South Korean pro baseball chief Chung Ji-taik on Tuesday resigned from his post about a year after he took office, citing health issues, the Korea Baseball Organization (KBO) said.

"The KBO League has struggled with many difficulties like restricted admissions stemming from the COVID-19 pandemic," Chung said in a statement released by the KBO. "Baseball fans were dissatisfied and enraged by some players' deviant behaviors and lower-than-expected Olympics results."

Before the Tokyo Olympics, some players, including national team members, were under fire for violating social distancing protocols, and some of them tested positive for COVID-19.

Consequently, the KBO's regular season was postponed for a week.

And at the Olympics, South Korea underperformed with a fourth-place finish in a six-nation tournament.

Chung said those problems are just the "tip of the iceberg" in Korean baseball, which has been suffering from chronic issues, such as declining popularity and rising criticism for poor performance.

"I think it is desirable that a new commissioner takes the top post and lead reform initiatives, so I am stepping down from the KBO position," he said.

The KBO will hold a by-election within a month, and its Secretary-General Ryu Dae-hwan will lead the organization as acting commissioner in the interim. (Yonhap)