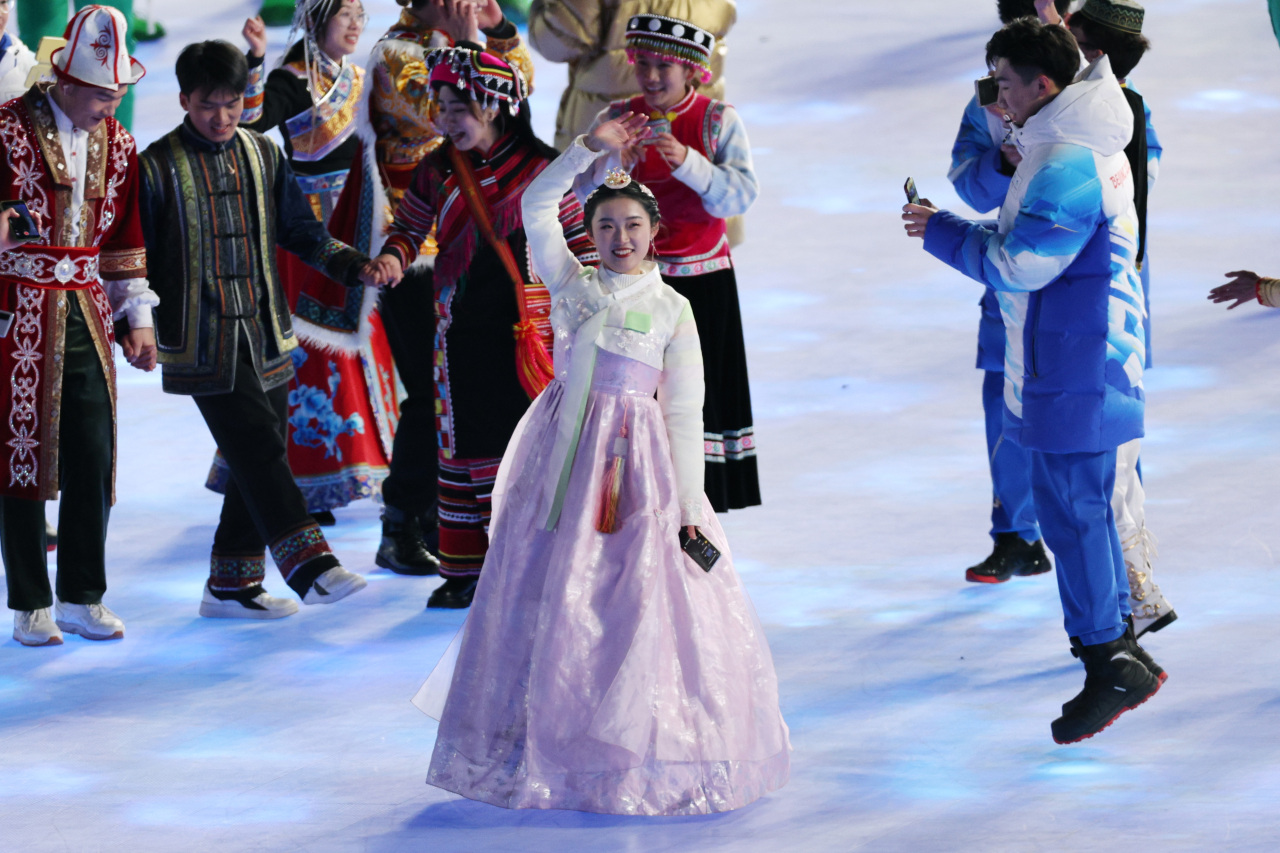 A Chinese performer dressed in hanbok, traditional Korean attire, waves during the opening ceremony of the 2022 Beijing Winter Olympics held at the National Stadium in Beijing, Friday. (Yonhap)
Hanbok has become the latest focal point in the decades-long row between Korea and China over many aspects of Korean culture that China claims as their own.

A new controversy erupted when a performer wearing hanbok, or traditional Korean costume, was seen participating in the opening ceremony of the Beijing Winter Olympics Friday night.

As people representing 56 ethnic groups in China carried the Chinese national flag into Beijing’s National Stadium, a woman in a white and pale pink hanbok marched along with other performers during Friday’s event.

The appearance of a hanbok-wearing performer as an ethnic minority sparked anger in Korea, with many criticizing the Chinese government for trying to “steal” Korea’s culture and accusing it of cultural appropriation.

“I expressed my position on the controversy and concerns in Korea (related to the hanbok),” Park said. On Saturday, Park had a meeting and dinner with Li Zhanshu, chairman of the Standing Committee of the National People’s Congress (NPC) of China.

“The chairman responded to the effect that he would convey (Korea’s position) to the relevant authorities and that Korea’s concerns would be taken into consideration. There is no one to doubt that hanbok is Korea’s representative culture. We need to take pride in our culture,” the speaker added.

“Do not covet the culture (of others). Oppose cultural appropriation,” Lee Jae-myung, the ruling Democratic Party of Korea candidate, wrote on his Facebook page within hours after the event.

Park Chan-dae, a lawmaker and spokesperson for Lee’s campaign team, added that he deeply regretted that hanbok appeared among the costumes of China‘s ethnic minorities at a global stage like the Olympics. He said on Saturday that China’s repeated claims to Korean culture have become an “extremely significant issue.” 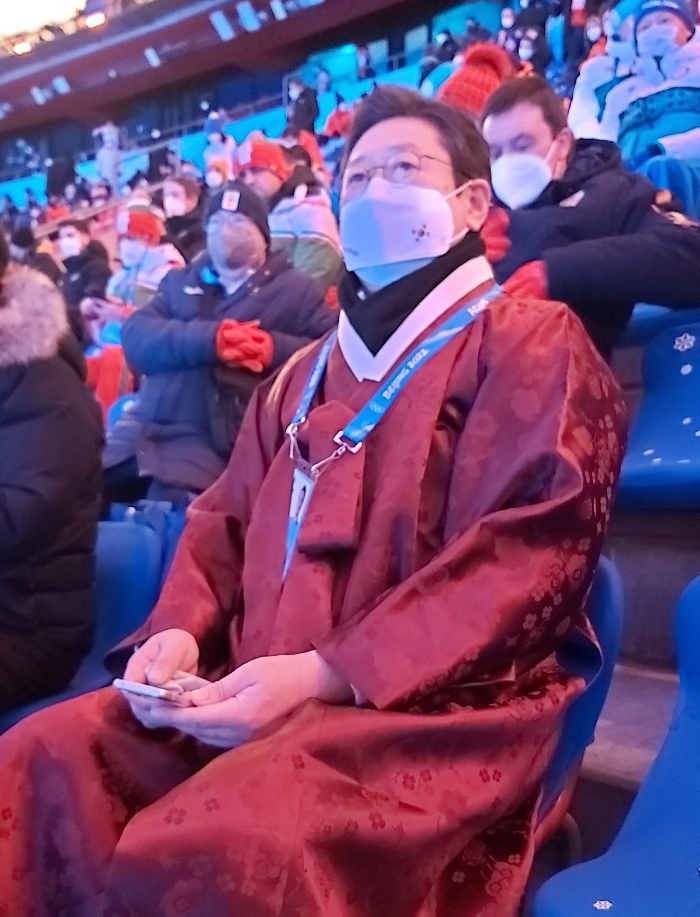 South Korea’s Culture, Sports and Tourism Minister Hwang Hee sits in the stadium stands wearing a red hanbok during the opening ceremony of the 2022 Beijing Winter Olympics at the National Stadium in Beijing on Friday. (Yonhap)
In the meantime, Yoon’s campaign spokesperson criticized Culture, Sports and Tourism Minister Hwang Hee, who is leading the government delegation in Beijing, for reportedly refusing to officially lodge a protest with the organizers over the hanbok-clad woman.

Although the Korean government has not issued an official statement, Hwang told Korean media that the opening ceremony could cause “misunderstanding” in bilateral relations, but that he had no plans to protest the incident.

An official at the Seoul’s Ministry of Foreign Affairs, however, said on Sunday that hanbok indisputably symbolizes Korean culture and that the government will continue to convey its position to China that cultural traditions need to be respected.

“It is indisputable that hanbok one of the representative aspects of our culture that has been recognized by the entire world,” the official, who wished to remain anonymous, said. The official vowed to maintain constructive communication with China, and to actively promote traditional Korean attire globally.

Seo Kyoung-duk, a professor at Sungshin Women’s University and activist promoting South Korean culture, said that China has already made too many claims to hanbok. At the same time, the expert urged South Korea to do a better job making the world more aware of the fact that hanbok is a traditional Korean costume.

Online communities and social media also saw numerous expressions of outrage over the depiction of hanbok as Chinese culture.

“Hanbok is traditional Korean dress” and “Don’t steal our tradition” were some of the commonly found posts.