Amid a growing interest in pets, however, there are illegal businesses renting out puppies or kittens for those who want the pet experience, minus the responsibility or commitment to a long-term relationship. For them, pets are no different from a one-day toy or props for photo shoots.

“We lend dogs or cats for 35,000 won ($29) per day,” advertises a pet shop based in Gwangjin-gu, Seoul, via a blog post on Naver, Korea‘s largest portal website. 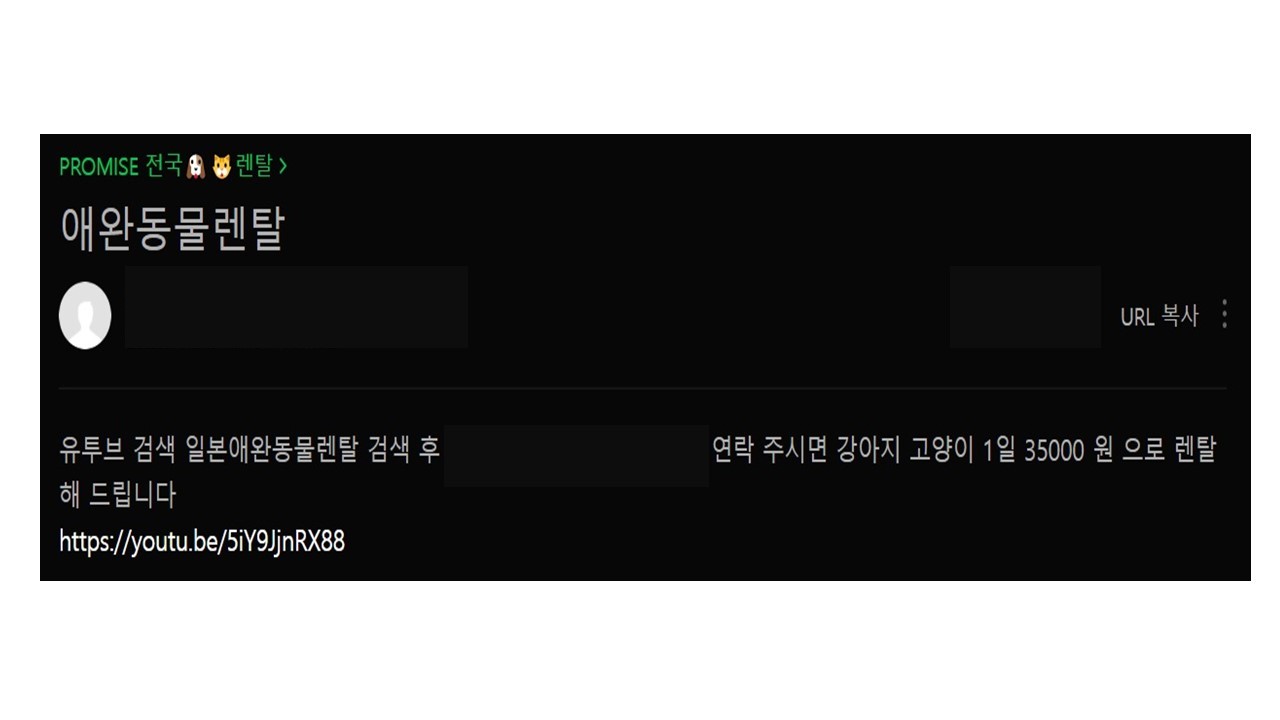 A screenshot of a blog posting on Naver promoting a pet rental service. (Naver)
When contacted for inquiry, the shop’s owner sent a link to an open chat room on messenger app KakaoTalk, which he apparently uses to communicate with customers and proceed related transactions. “You can borrow dogs and cats for more than a day. The costs vary depending on the animals‘ breeds,” the owner said.

His business of lending pets is illegal under the current Animal Protection Act, which stipulates that a person making profit from renting out domestic animals could face a fine of up to 3 million won.

Despite the ban, there appears to be an unknown number of people like the Gwangjin-gu businessman offering pets for rent in recent years, according to animal rights groups.

“It’s hard to know exactly how many pet rental businesses there are across the nation, but I expect quite a few, boosted by the growing pet market here,” said Chae Il-taek, an official at the Korean Animal Welfare Association, in a phone interview.

Calling pet rentals a dark side of Korea’s pet scene, he shared the case of a father who borrowed a dog for three days because his child kept pestering him to adopt a pet, even though he had allergic rhinitis.

“Temporarily raising and abandoning pets can be a form of animal abuse. Dogs and cats feel extreme stress when being put in a new environment. Also, there are possibilities for abuse by some bad owners,” he said.
While individuals’ rental of animals is against the law, there are some exceptions. Animals may be rented for the purpose of filming, experience programs or for other educational purposes.

So the majority of pet rental providers here primarily cater to people in the media and entertainment industry.

One online company, for instance, has recently posted an advertisement to lend a white Pomeranian puppy at 150,000 won for two days. The service is only available for customers who will have photoshoots with the puppy, it said.

A screenshot of online websites lending animals for filming purposes.
“We deliver the puppy by car to those living in in Seoul. If you live outside the city, you should come to our office in Dobong-gu to take it. Our main customers are camera crews at magazine companies as well as advertising agencies,” the company’s owner said.

Another rental shop in Goyang, Gyeonggi Province is lending more various types of animals, ranging from small pets like guinea pigs and corn snakes to bigger ones such as prairie dogs, goats and horses, to individuals and companies who need them for photo or video shoots. All the animals, regardless of species, cost 50,000 won for a three-hour rental, the store said.

A former racehorse who died after falling headfirst to the ground during the filming of a stunt for KBS’ historical drama series “The King of Tears, Lee Bang-won,” was also offered by a local animal rental company specialized in TV and film productions. The rental firm has been in the business for over 20 years, KAWA said.

The death of the horse, which was called Kami back in its racing days, has sparked public outcry over the cruelty behind the scenes of TV shows and films featuring animals.

“Many broadcasting stations don’t have internal guidelines aimed at protecting animals used by filming crews. Considering the lack of their self-help efforts, there’s a great need for the government to add new clauses to the current Animal Protection Act that would place greater responsibility on both animal rental operators and their customers, while strengthening penalties for animal abuse,” said Suh Cooc-hwa, a lawyer at the civic group People for Non-human Rights, established in 2017 to prevent animal cruelty and improve the management of animal rights.

Amid the mounting calls for better treatment of the service animals, the Ministry of Agriculture, Food and Rural Affairs earlier vowed to draft guidelines on the protection of animals being used on TV drama or movie sets. These guidelines will include care tips by animal type and precautionary measures to prevent mistreatment, the ministry said in a press release on Tuesday.

Some say there needs to be an independent public or private body that conducts onsite inspections of filming sites using animals, like the non-profit American Human Association which has been responsible for monitoring the safety of animals on media sets since the 1940s.

The group grants the “No Animals Were Harmed” end credit certification to Hollywood movies that meet its care standards for animal actors.

“Along with institutional changes, practical steps to prevent animals used at the filming site from getting hurt are urgently needed,” said Kan Hyun-yim, an official at the Korea Animal Rights Advocates.