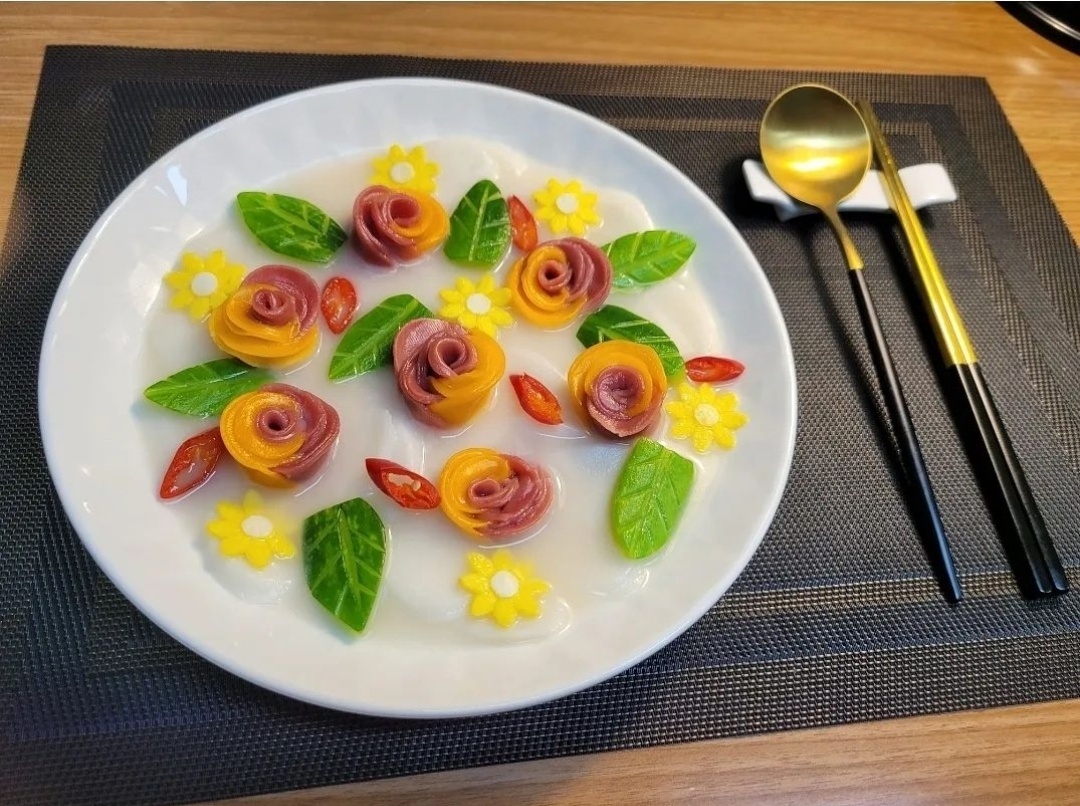 Yu Kyoung-suk found joy by making special tteokguk, or rice cake soup, this year. As the year became 2022, he came up with a fancy tteokguk -- topped with flower-shaped dumplings and jidan (egg garnish) -- to share with his wife and their two sons. He squeezed juice from beets and carrots to add colors to the dumpling dough to make a special tteokguk this year.

“When the New Year comes, Koreans eat tteokguk made using rice cake slices from garaetteok (a stick of long rice cake) which symbolizes good health and long life. I used to eat it without giving it any special meaning, but this year feels different,“ Yu said. ”I wanted to try something new, with fancy decorations to share with my family wishing for vitality,” the 37-year-old resident of Gyeonggi Province said. He will try his new tteokguk on Lunar New Year‘s Day to enjoy with jeon, Korean-style pan-fried fritters.

Tteokguk is a classic staple of Koreans, commonly enjoyed at the start of the New Year.

While New Year’s rice cake soup is not something new and is taken for granted -– many Koreans take part in the ritual of slurping down a piping hot bowl of rice cake soup for breakfast without much thought. However, the dish feels special this year to many as the world marks the start of the third year of the COVID-19 pandemic.

The rice cake soup can be served with different broths, depending on the recipe –- the popularly used broths are based on dried kelp, beef or beef bone broth, also known as sagol. Slices of white rice cake are added to the boiling broth, which is served with jidan on top.

A white garaetteok is widely known to have the symbolic meaning of “purity and longevity.” As more people seek visual impact for tteokguk, particularly young people, slices of white rice cakes now come in a variety of colors and shapes. They include flower-patterned rice cakes and rice cakes with five primary colors, or obangsaek -- black, red, white, blue or green and yellow. 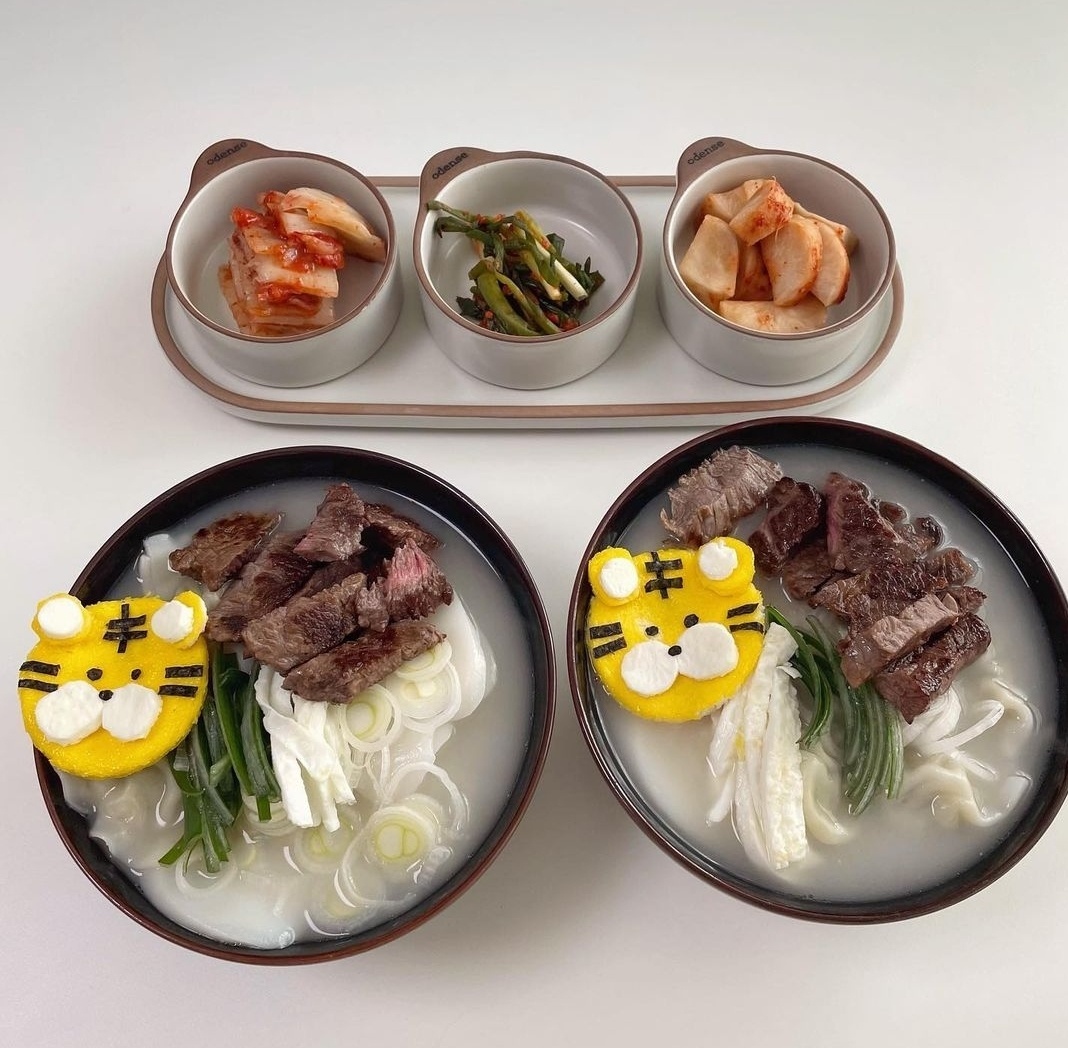 Lee made a special tteokguk on New Year’s Day for her husband and five-year-old son, making the number of “2002” using cookie cutters to create a special egg garniish to celebrate the new year. She started putting the number egg garnish last year, as she began to look for something different amid the prolonged pandemic. 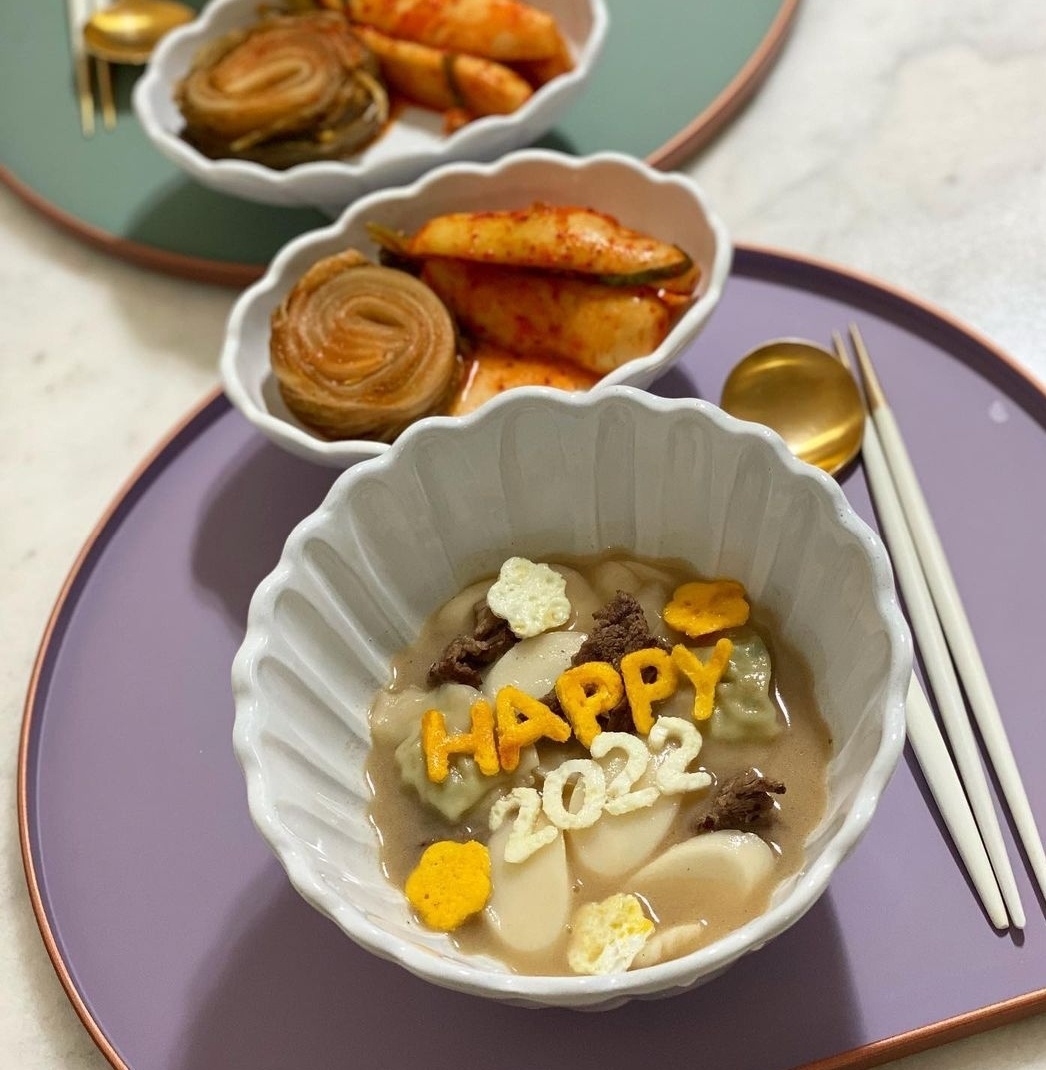 New year‘s tteokguk prepared by Lee Yu-ra (courtesy of Lee)
"For our family, eating a bowl of tteokguk together signals a start to the New Year. We skipped tteokguk once, and I had a strange feeling that we were not welcoming the new year,” Lee said.

Lee offered a tip on making jidan decorations, stressing that one should make them first before starting to cook the main tteokguk because it can take more time than expected.

“I recommend you make jidan first and cool it down to make the shape you want. For example, you can do this by using cookie cutters. Put them aside and start the main cooking. Otherwise the rice cakes would get soggy, or the soup will evaporate.”