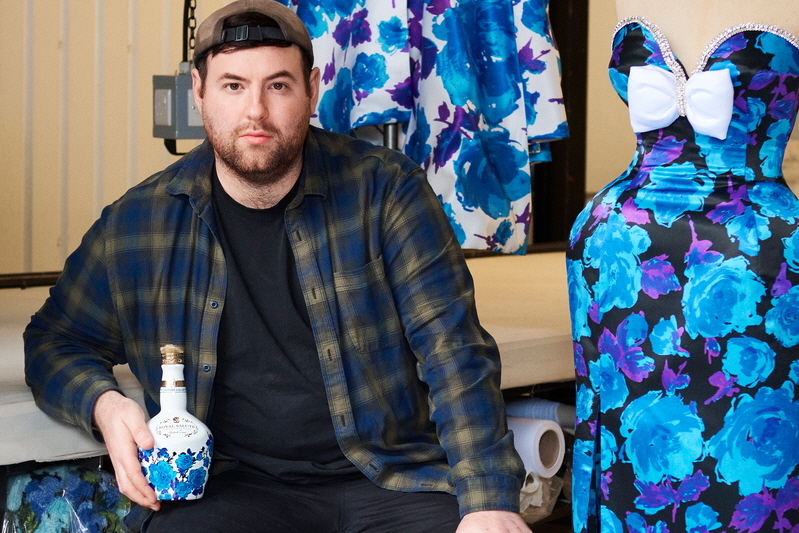 Created to mark the coronation of Queen Elizabeth II, Royal Salute’s every detail from its tasting note to the bottle design is dedicated to being British.

In that context, Royal Salute’s latest collaboration with London-based fashion designer Richard Quinn is more than just a collaboration between the two British icons.

According to Quinn, he has reinterpreted the British royal heritage of Royal Salute with his own style and inspiration.

He said his design for this edition embodies the idea of “the edge of Beauty.”

“Balancing beauty and dark twist is at the core of everything we do. For example, we often combine beautiful floral prints with latex, creating a sense of juxtaposition. For us, adding an element of the edge of darkness elevates the beauty of the clothes, and plays an important part in all Richard Quinn collection,” Quinn said in a written interview with The Korea Herald.

For the collaboration, Quinn created the new pattern, inspired by the blue rose, to embody wonder and a unique quality. He has included the thistle to symbolize Scotland, the home of Royal Salute.

He said at the center of the bottle is a rose pattern, which is a value commonly shared by the UK, Royal Salute and also his fashion style.

“I incorporated the bold and colorful flower pattern created by combining the blue rose and thistle into the iconic bottle of Royal Salute, as well as the three dresses specially presented for this collaboration to deliver the brand story of Royal Salute with a hyper-real and daring beauty,” he said.

With the launch of the Royal Salute 21 Year Old Richard Quinn Edition, a pop-up exhibition was held from Jan. 13 to 15 at Boon the Shop Cheongdam in Seoul.

“Korea is becoming one of the most dynamic countries in the world in terms of culture and art. I think that Korean consumers who embrace diversity and are open-minded make it possible.”