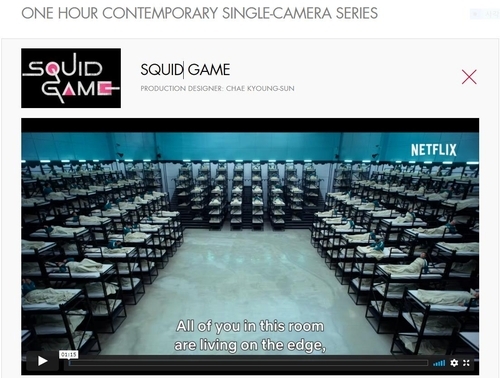 This image, captured from the homepage of the US Art Directors Guild (ADG), shows a scene from the Netflix TV series "Squid Game." (ADG)
Global TV sensation "Squid Game" and the music video for "My Universe," a collaborative single between BTS and British rock band Coldplay, have been nominated for the 26th annual US Art Directors Guild (ADG) Awards.

The ADG on Monday (US time) announced nominations for this year's awards show, which will return to a live ceremony on March 5 in Los Angeles.

Netflix's Korean-language original earned a nomination in the one-hour contemporary single-camera series category for the various filming sets for the sixth episode titled "Gganbu," while the video for "My Universe" got a nod in the music videos category.