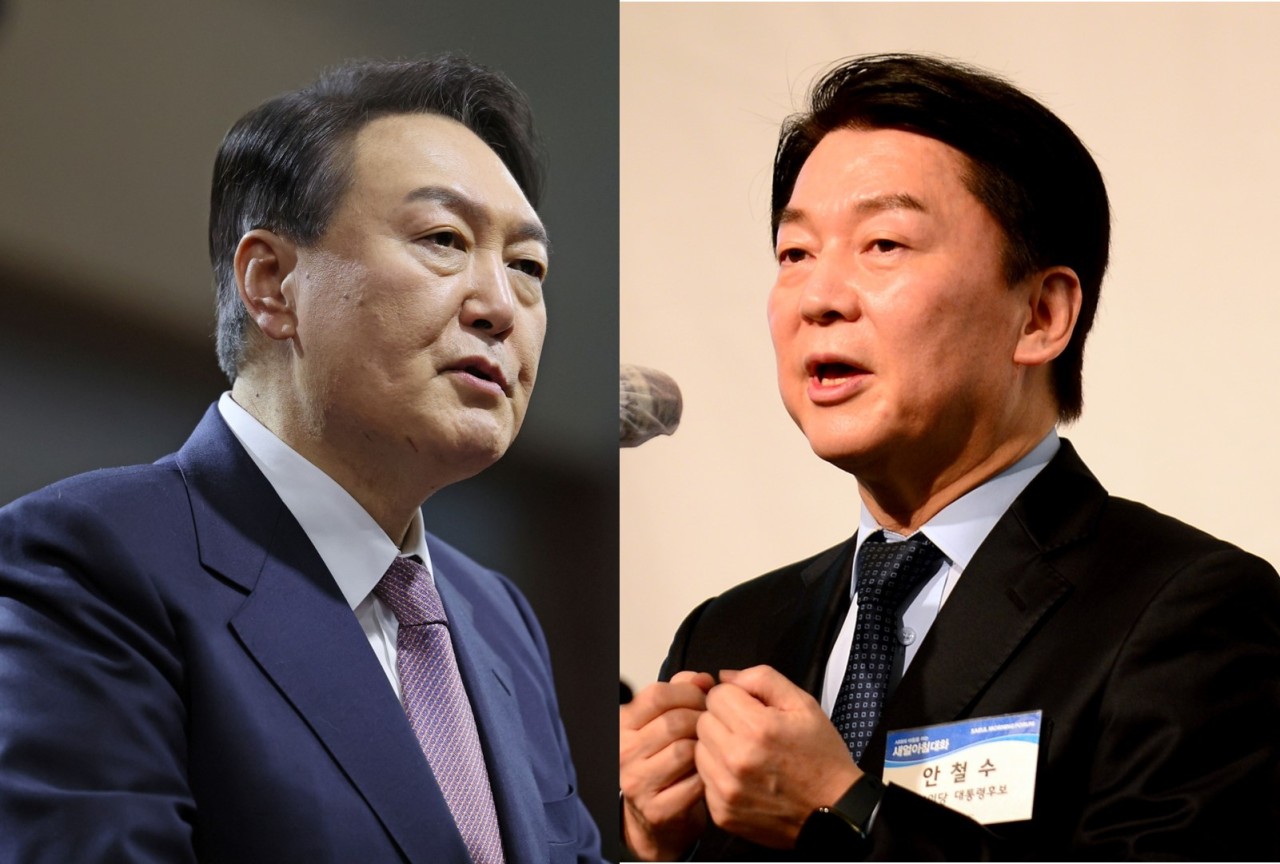 Will two presidential candidates, Yoon Suk-yeol and Ahn Cheol-soo, merge their campaigns to win the upcoming election? It remains one of the burning questions ahead of the March presidential election.

Unification during an election campaign refers to two or more candidates merging their campaigns to win the election. And “unification” is a word that comes up time and time again in election season.

The first attempt to unify was in the 1987 presidential election. Many Koreans who attained the right to a direct presidential election through the June democratic uprising against a dictatorship hoped for a regime change via the polls. Many voters wanted one of either Kim Young-sam or Kim Dae-jung, both of whom participated in the June uprising, to overcome Roh Tae-woo, a key player in the brutal crackdown on pro-democracy protesters. However, the two Kims ran separately and both lost.

The most interesting turnaround via alliance was the 16th presidential election in 2002.

Fifty days before the election, a Gallup Korea poll showed conservative candidate Lee Hoi-chang in the lead with 34 percent support, followed by Chung Mong-joon, a businessman and conservative-leaning lawmaker, with 24 percent as well as Roh Moo-hyun from a liberal party with 18 percent.

Roh, who faced humiliating demands to replace him as the candidate due to low support, proposed an official unification to Chung on Nov. 3, 46 days before the election. On Nov. 7, the two sides formed a unified negotiating team. Finally on Nov. 24, just 25 days to go before the election, the two dramatically agreed on unifying despite different ideological orientations.

Roh, who had been pushed to third place in the polls, quickly jumped to the lead through the alliance two weeks before the election, winning a dramatic victory in the 16th presidential election. The election result showed that Roh beat Lee by only 2.3 percentage points.

Even after unification, some ultimately failed at the polls.

Fifty days before the 18th presidential election in 2012, Park Geun-hye, daughter of former dictator Park Chung-hee, led with 37 percent in the polls, followed by rising star and independent candidate Ahn Cheol-soo (25 percent) and Democratic Party candidate Moon Jae-in (21 percent). Around 40 days before the election, Moon and Ahn agreed to unify, but the negotiation process was not smooth.

As the fierce war of nerves continued over the unification method, voters turned their backs. In the end, Ahn declared, “I will put down my candidate position to replace the regime and follow the army to the battlefield without a post,” as Moon became the sole candidate.

However, largely due to the emotional baggage exposed in the process, Moon and Ahn failed to bond and the uneasy relationship continued into the presidential election. In the end, Park beat Moon by 3.6 percentage points.

Timing is also essential to unifying.

For the March presidential election this year, the hot-button issue is whether the main opposition People Power Party’s candidate Yoon Seok-yeol and minor opposition People Party’s leader Ahn Cheol-soo can -- or will -- unify and beat ruling party candidate Lee Jae-myung.

They share the goal of regime change. However, “Unification seems difficult,” said Park Sang-chul, a professor at Kyonggi University’s Graduate School of Politics and Policy.

“There is no great justification such as democratization and they can’t expect a big upward effect as Roh and Chung had,” he said.

In 2002, the combination of Chung’s conservative supporters -- who were against other conservative politician Lee Hoi-chang -- and Roh’s middle-class supporters had a synergistic effect with each other. But in 2022, “Because Ahn Cheol-soo has many undecided supporters, if they are unified, many could feel betrayed and go to Lee Jae-myung instead. In this case, one plus one will not be two.”

Political calculations also must be factored in.

“There’s a big difference in political positions between Ahn and Yoon. Yoon’s political career may be over if he can’t make it this time, but Ahn is already a politician. He must think about the next moves, such as general elections, so it would be better for him to complete the race until the end even if he loses the presidential election,” Park said.

The timing is also not good.

Considering unifications of the past, the issue of unification between Yoon and Ahn should come to the fore early this week, about 45 days before the election. But the two parties still officially deny any potential alliance. Under the Public Official Election Act, the registration date for presidential candidates is Feb. 13. After that, it is not possible to make a change.