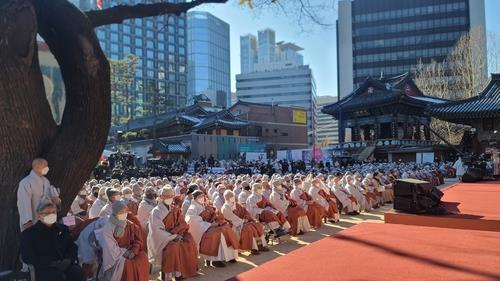 Buddhist monks participate in a massive rally against the government's apparent religious bias at Jogye Temple in downtown Seoul on Friday. (Yonhap)
Thousands of Buddhist monks held a rally in Seoul on Friday, demanding President Moon Jae-in apologize for what they called the government's anti-Buddhist bias after a ruling party lawmaker accused temples of collecting admission fees from visitors to national parks.

The lawmaker, Rep. Jung Chung-rai of the Democratic Party, has been under a firestorm of criticism from South Korea's largest Buddhist sect, the Jogye Order, since he compared temples collecting "cultural asset viewing fees" to a legendary swindler known for selling river water for money.

Temples located at national parks have collected 3,000-4,000 won per person in fees from all park visitors regardless of whether they visit the temples or not. Temples argue they are entitled to such fees because the money is used to take care of temple assets and private areas belonging to temples inside the parks.

Friday's rally, held at the Jogye Order's headquarters in central Seoul, drew attention because it came at a time when the presidential race is heating up amid speculation that anti-government sentiment among Buddhists could affect the chances of ruling party candidate Lee Jae-myung.

It marked the first time in 28 years that the Jogye Order has organized a large-scale rally of monks from across the nation in the name of the National Convention of Monks since a 1994 rally was convened for reform of the sect.

"The government is to preserve cultural heritages, but it now dares to instigate religious conflicts and shift the responsibility," Ven. Wonhaeng, the head of the Jogye Order, said during the rally held at Jogye Temple.

"In the government of Moon Jae-in, opportunity was not equal, the process was not fair and the result was not righteous," he said, parodying Moon's presidential inaugural address in 2017.

In a statement released before the rally, the Jogye order and the participants called for President Moon's apology, the enactment of laws to prevent further religious bias against Buddhism and measures to preserve national heritages.

The Jogye order also said it is well aware of the growing public concerns over a massive gathering in the midst of the pandemic, but the religious biases and Buddhist distortions reached a boiling point.

It said Buddhism has well complied with the government-led precautionary measures since the outbreak of COVID-19, but the government rewarded it with unprecedented religious bias. (Yonhap)