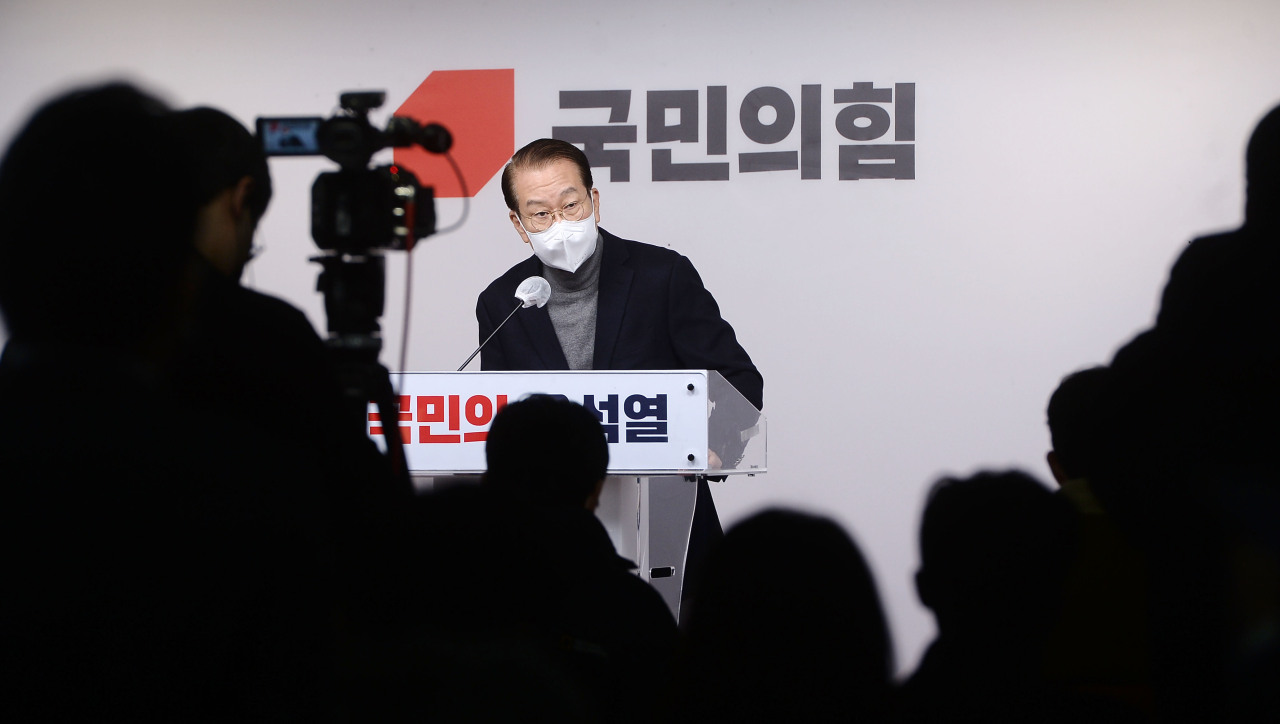 Rep. Kwon Young-se, head of the presidential election campaign committee for main opposition People Power Party's presidential nominee Yoon Suk-yeol, announces the decision to disband a networking subcommittee during a press conference held Tuesday. (Joint Press Corps)
The main opposition People Power Party disbanded a networking subcommittee under the election campaign committee for its presidential nominee Yoon Suk-yeol after claims arose that a shaman was involved in an advisory role for the subcommittee and took part in the campaign.

Rep. Kwon Young-se, head of Yoon’s election campaign committee, told reporters Tuesday that the campaign team would disband the subcommittee immediately to firmly respond to any malicious accusations that may be made against Yoon in regards to the recent rumors.

Suspicion was raised earlier that a 61-year-old shaman surnamed Jeon had took part in decision-making and served as a hidden leader of Yoon’s campaign team, having been brought in without an official appointment.

The alleged shaman was found in a now-deleted video recorded Jan. 1, appearing to introduce Yoon to a number of campaign staff members when Yoon visited the office of the networking subcommittee. Jeon was seen guiding Yoon to take photos with the staff through friendly physical and verbal gestures.

Jeon’s actions in the video suggested familiarity with the election campaign committee’s organization and its members. He is a close acquaintance of Yoon and his wife Kim Keon-hee.

Additional accusations were made that Jeon’s daughter and brother-in-law had also participated in campaign efforts for Yoon, together raising concerns that South Korea might suffer another round of mysticism in its politics and administration if Yoon were to win the presidential election in March.

South Koreans are sensitive to shamanism and mysticism being involved in politics and administration, especially after former President Park Geun-hye faced allegations of cult rituals and being mysteriously influenced by her close friend, Choi Seo-won, who was then known as Choi Soon-sil.

Choi’s father, a self-proclaimed pastor and founder of an obscure sect called the Church of Eternal Life, was accused of being a Korean version of Rasputin, serving as a mentor and counselor for Park and winning her trust when Park’s mother Yuk Young-soo was assassinated in 1974.

The latest allegation raised against Yoon has sparked worries that he may be influenced by shadowy figures, as was the case with the former president until she was impeached.

The People Power Party denied the allegations, saying the figure in question was only a close acquaintance of Yoon who was never appointed to serve in the campaign committee. Jeon’s family members merely volunteered for the networking subcommittee and never advised Yoon in any manner, the party added.

"The man surnamed Jeon reported in the media was never appointed to serve as a counsel for the networking subcommittee, and it is not true that he is a shaman, as we identify him as the planning manager for a Buddhist organization," the party said in a statement Monday.

"Although the figure in question visited the office of the networking sub-committee a number of times, we clearly state that he was never involved in setting the agenda, message or personnel appointments for the election campaign committee."

The party also reported three media figures to the prosecution for spreading false information in regards to the controversy.

Despite rebuttals from the People Power Party, the controversy remained hot and lively as Yoon’s wife Kim claimed to be “a spiritual person” who favors consulting with religious figures, according to her phone calls with a reporter made public by a local broadcaster Sunday.

"I hate being loud," Kim said in the recorded conversation. "I am a spiritual person, so I prefer reading books or talking with religious figures on topics like what life is about."

The latest controversy could thwart the recovery of voter support for Yoon, which is believed to have come from successful campaign reform efforts following the conclusion to a damaging internal feud.

A Realmeter poll of 3,031 voters commissioned by OhmyNews that ran Jan. 9-14 showed Yoon leading with 40.6 percent support, followed by his rival from the ruling Democratic Party of Korea at 36.7 percent.

The contents of Kim’s publicized phone conversation and following discussions could influence support for Yoon. While some of her comments have faced fierce public backlash, other groups have positively reacted to her comments.

An online fan community for Kim on Naver saw its membership surpass 7,700 by Tuesday morning, a sharp increase from 200 members seen late Saturday. Many of the new members claimed to be fans of Kim after hearing the conversation broadcast Sunday night.

People Power Party Chairman Lee Jun-seok said Monday that many would have considered the publicized conversation between Kim and the reporter as failing to match up to its claims, adding the event is serving as an opportunity for Kim to prepare to officially involve herself in Yoon’s campaign.

"If (Kim) is supported in public for campaign activities, I don’t think we need to be so concerned with her involvement," Lee said in a radio interview Monday. "Problems could arise from delaying the activities of (Kim) as a public figure just because the attacks against her are too much."