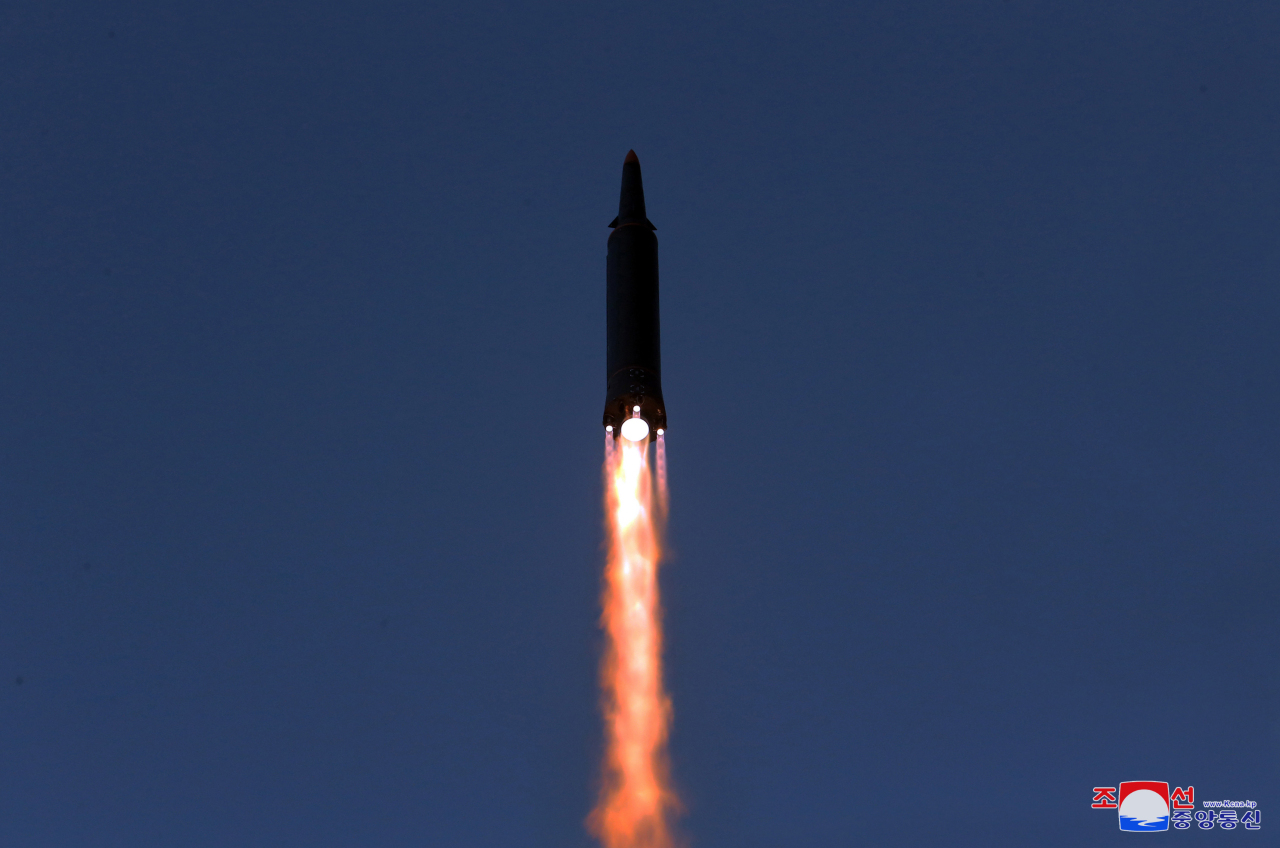 This photo, released by North Korea`s official Korean Central News Agency on Wednesday, shows what the North claims to be a new hypersonic missile being launched the previous day. (KCNA-Yonhap)
North Korea test-fired what appeared to be two ballistic missiles from an inland area toward the East Sea on Friday in its third weapons launch this month, just hours after it warned of “stronger and certain reaction” toward Washington for imposing new sanctions against the regime’s recent back-to-back missile tests.

The Joint Chiefs of Staff said North Korea fired two projectiles, believed to be short-range ballistic missiles, from a site in North Pyongan Province toward its east coast on Friday afternoon.

Earlier on Friday, Pyongyang hit back at the US for “intentionally escalating” the situation through fresh sanctions, when the North was practicing its “right to self-defense” through developing new weapons.

A spokesperson for the country’s Foreign Ministry, in a statement carried by the official Korean Central News Agency, said that Pyongyang’s launches of new weapons were its “legitimate right” and part of its efforts to modernize its national defense capability.

The North fired what it claims to be hypersonic missiles on Jan. 5 and Tuesday, after a gap of more than two months of weapons tests in September and October. While analysts play down Pyongyang’s capability of mastering the technology in this area, the series of test-launches raise security concerns as hypersonic weapons can achieve more than five times the speed of sound and are difficult for existing missile defense systems to intercept.

“The US accusation of the DPRK’s legitimate exercise of the right to self-defense is an evident provocation and a gangster-like logic,” the statement said, referring to the country’s official name, the Democratic People’s Republic of Korea. “If the US adopts such a confrontational stance, the DPRK will be forced to take stronger and certain reaction to it.”

On Wednesday, the Joe Biden administration slapped its first sanctions over North Korea’s weapons program, following a series of weapons tests since last September. It imposed sanctions on five North Koreans living overseas –- one in Russia, and four in China -– over their roles in procuring goods for the country’s weapons of mass destruction and ballistic missile programs.

Washington is also pushing for stronger UN sanctions on North Korea, as part of a wider effort to put pressure on Pyongyang. But it is unclear whether China and Russia –- permanent members of the UN Security Council –- will support the US initiative.

Pyongyang said Washington’s sanctions show that while the US appears to be “trumpeting about diplomacy and dialogue,” it is “still engrossed in its policy of isolating and stifling” North Korea.

“The US is intentionally escalating the situation even with the activation of independent sanctions, not content with referring the DPRK’s just activity to the UN Security Council.”

Following the sanctions announcement, US Secretary of State Antony Blinken said in a Thursday interview with MSNBC that the North’s latest tests are “profoundly destabilizing.”

“I think some of this is North Korea trying to get attention. It‘s done that in the past. It’ll probably continue to do that,” Blinken said. “But we are very focused with allies and partners in making sure that they and we are properly defended and that there are repercussions, consequences for these actions by North Korea.”