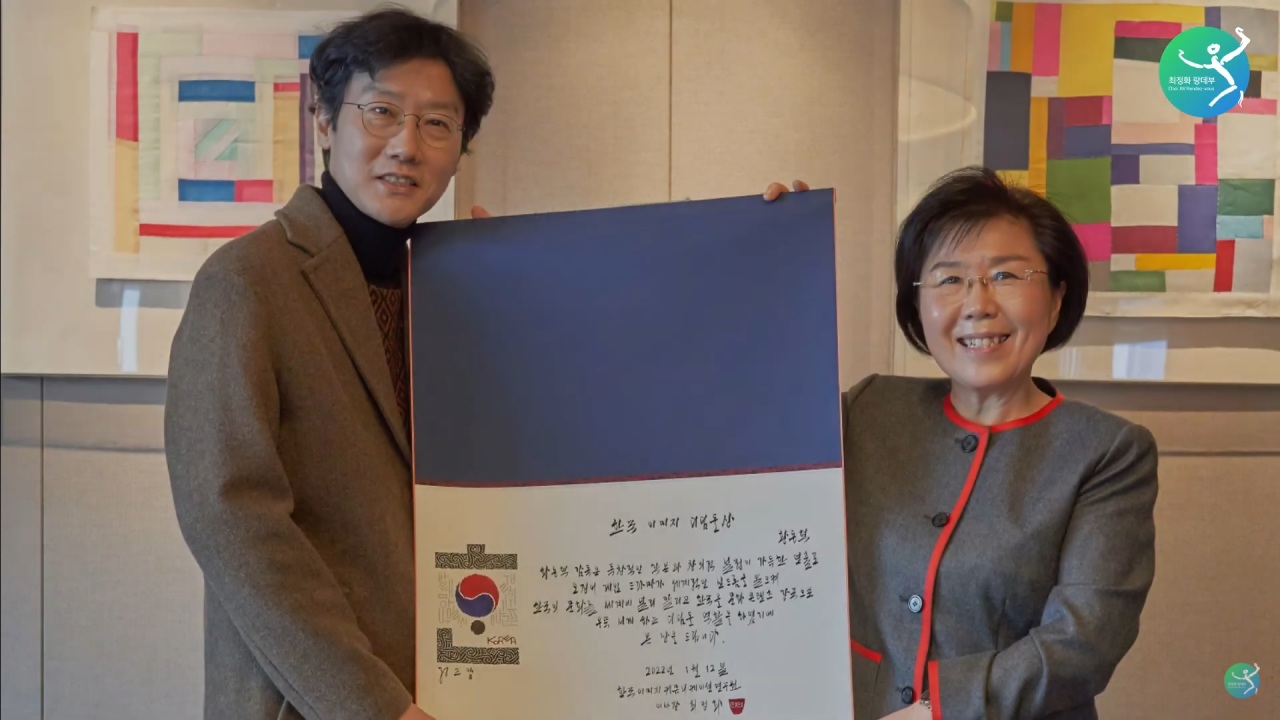 Director Hwang Dong-hyuk (left) and CICI President Choi Jung-wha pose for a photo after Hwang is presented with the Korea Image Stepping Stone Award in December 2021. (Choi JW Rendez-vous YouTube channel)
Director Hwang Dong-hyuk, the mastermind behind South Korea’s global phenomenon “Squid Game,” had said that he plans to make a story set in the near future.

“I am planning something that is futuristic. I’ve done stories of the past and eccentric things that can happen in the present. I would like to make a social drama, which talks about the problems that we might face within the next 20-30 years,” Hwang said in a pretaped interview with Corea Image Communication Institute President Choi Jung-wha in late December, 2021 that was released Wednesday evening.

While he did have a dream and goal when he was creating the series, Hwang did not expect “Squid Game” to become a such a smash hit.

“I never imagined that it would do as well as it did. I wanted to create a personal story that best fits the Korean sentiment, with which even the global viewers could easily empathize. I think many people liked how the cute Korean games presented in the series showed the sides of the real world that we live in today,” the director said.

The global success aside, the director also shared his stories about debuting as a drama series director with “Squid Game.”

The 50-year-old director thought that no part of the process was easy when creating the series with several episodes.

While he was familiar with creating 100-minute or so movies, Hwang said the mental and physical challenge of producing a nine-episode series made him doubt he could pull it off.

“The sheer amount of script to write, of cuts to take, the energy and time spent is much greater compared to a movie. And I learned the importance of cliffhangers … at the end of an episode to make the viewers curious and excited about the next one while producing ‘Squid Game,’” Hwang added.

Toward the end of the interview, the creator shared his thoughts about humanity and society.

“We are living in a society where we need to tread and override others to survive, but I still believe that there is another way,” Hwang said after citing a quote by Sae-byeok (played by Jung Ho-yeon), “Don’t do it. That isn’t you. You are a good person at heart.”

“I think this is a quote which represents everything that I wished to convey through the project. Despite the fierce competition, I think people still believe that everybody deserves to live well without killing or trampling on the others,” the director said.