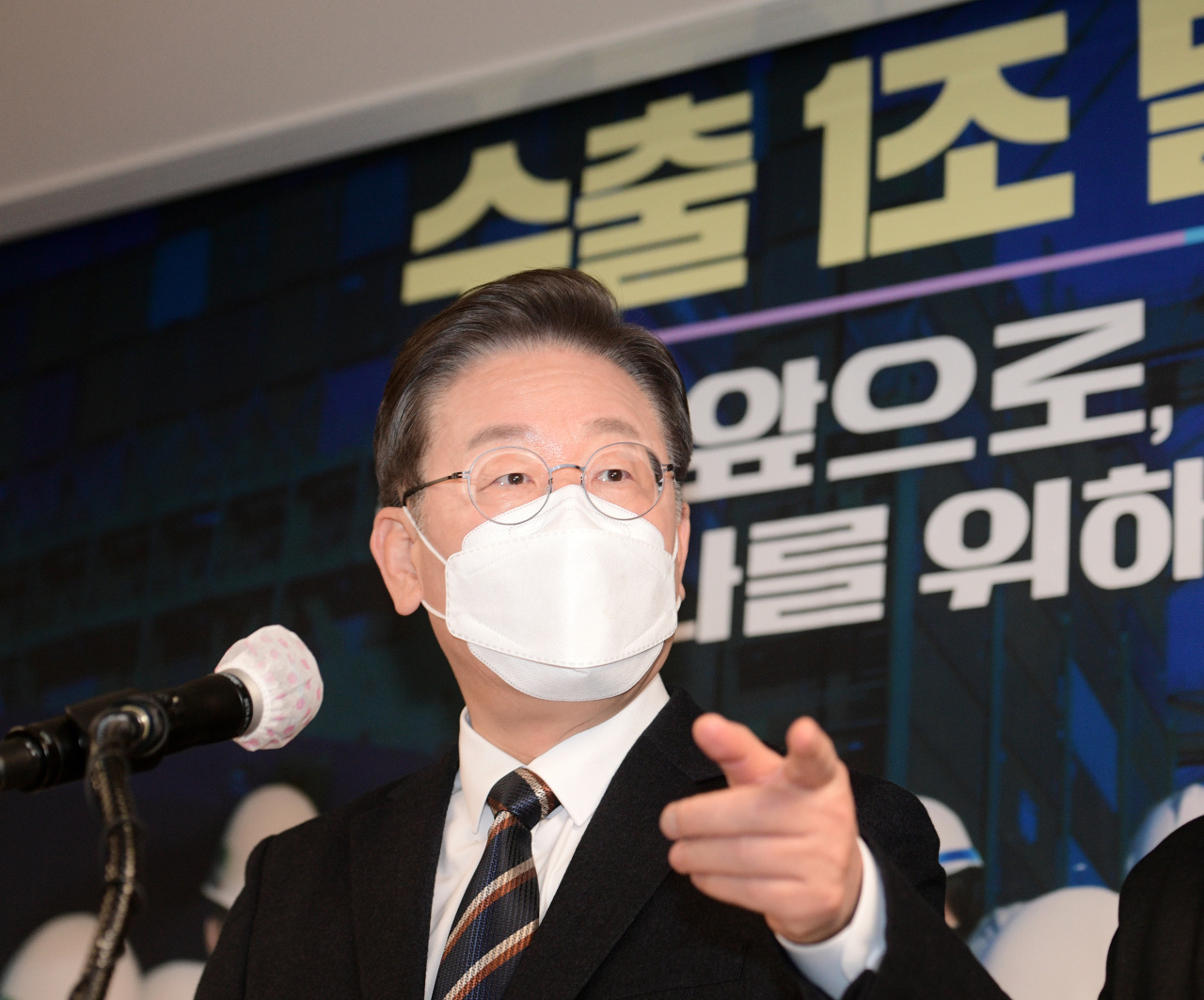 Lee Jae-myung of the Democratic Party of Korea said in an event Wednesday that, if elected, his government would lead a digital transition in the manufacturing sector and foster the renewable energy sector to adapt to the new global business environment.

"Products and markets must be diversified before anything else," Lee said.

"I will diversify export products by focusing on traditionally strong products in memory chips, petrochemicals and machinery and supporting new business areas like bio-health and new mobility as well as agriculture and fisheries."

Lee added his government would secure export routes for service sectors to expand the country’s markets for cultural contents, game, education and medical services while clearing service trade roadblocks in other countries.

He vowed to especially focus on the Americas, the Middle East and Africa. Trading digital technologies and related products is also part of his vision.

The presidential nominee said his initiatives would enable export volume to achieve an annual average of 7.8 percent growth.

"If exports increase, manufacturing will grow, and employment will grow from increased manufacturing efforts, which will help increase people's income," he said. "Influx of profit from export will help stimulate the economy and thereby improve the quality of living for the people."

Lee said his government will launch a project to foster 10 major business areas with potential to lead South Korea’s future economy, including the semiconductor, mobility, battery, display and biopharmaceutical sectors.

His administration would also put efforts to grow five emerging business areas like robots, green energy, aerospace and the metaverse, he added.

The latest announcement follows Lee's presentation made a day earlier, where he vowed to turn South Korea into the fifth-largest economy in the world while reaching a per-capita gross domestic product of $50,000.

His vision entails having the government take the lead in driving growth with an emphasis on fostering key technologies while providing infrastructure to support a transition highlighted by digital growth and eco-friendly technologies.

Lee acknowledged Wednesday the goal would be difficult to reach during his five-year term, but added he will work to set a foundation for the initiative. He added the goal was mentioned as a realistic target for South Korea to eventually reach, if helped by his government’s efforts during his term.

In responding to concerns that a transition would lead to mass unemployment, Lee said his government will prioritize providing reeducation opportunities for the working population in finding new jobs while establishing a social safety net for workers to quickly adjust to the new environment.