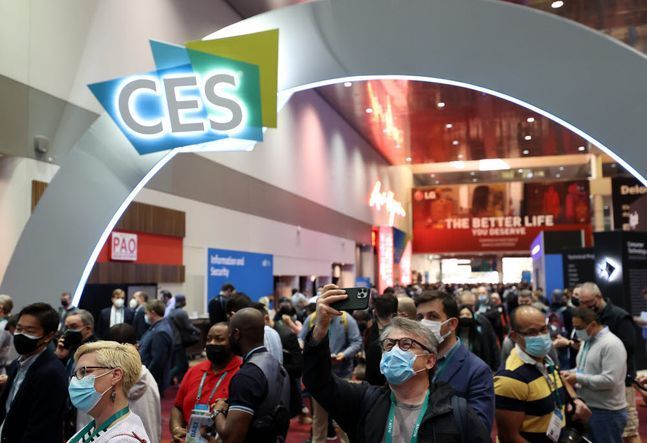 Visitors are packed at CES 2022. (Yonhap)
Samsung Electronics dispatched chartered flights to Las Vegas to bring home some 20 staff members and executives who tested positive for COVID-19 at the CES 2022 trade show, according to industry sources Wednesday.

The majority of the infected Samsung officials returned to South Korea late Tuesday night, while the remaining officials arrived around noon on Wednesday.

Most of the officials reported minor or no symptoms. After arrival, they were transferred to a quarantine facility for medical treatment.

All travelers returning to Korea are required to submit negative PCR tests within 72 hours before departure, or their boarding is denied by airliners, which is why Samsung sent chartered flights to Las Vegas.

Hyundai Heavy Industries Group, which participated in the consumer electronics trade show for the first time this year, also suffered from the pandemic, with six of its employees now under quarantine in the US.

“We are covering all expenses including their hotel accommodations and COVID tests,” an HHI official said.

SK Group saw six or seven of its officials test positive, all of them remaining in the US, while multiple officials of Hyundai Motor and Hyundai Mobis tested positive after arriving in Seoul.

CES 2022, which held an in-person event after being online-only last year, was held for three days, one day shorter than the originally planned four days. Though the event only allowed those fully vaccinated and required face masks to be worn indoors, enforced measures were reportedly insufficient in preventing swarms of visitors and reporters from getting infected.