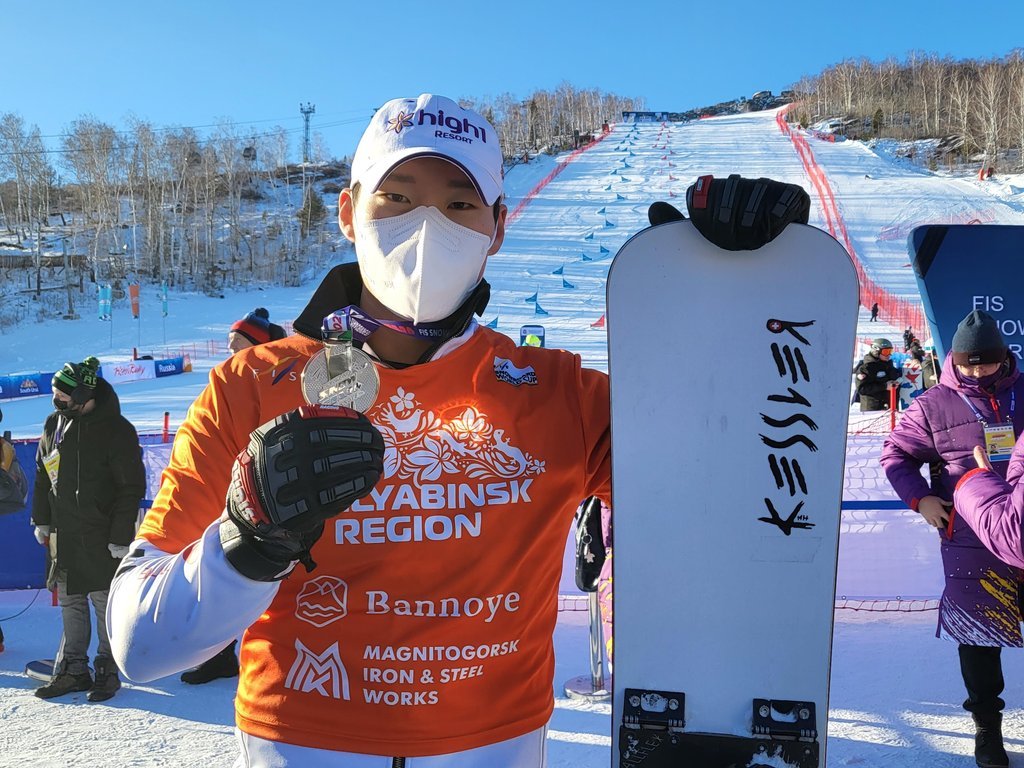 This Dec. 11, 2021, file photo provided by the Korea Ski Association shows South Korean alpine snowboarder Lee Sang-ho after his second-place finish in the men's parallel slalom at the International Ski Federation Snowboard World Cup in Bannoye, Russia. (Korea Ski Association)
South Korean Olympic snowboard medal hopeful Lee Sang-ho continues to lead the World Cup standings for the season, despite missing the podium for only the second time in his latest competition in Austria.

In alpine snowboard competitions, the top 16 athletes after the qualification are dropped into the tournament-style knockout brackets. Lee was the top qualifier and easily advanced to the quarterfinals when his first knockout opponent, Yannik Angenend of Germany, failed to finish his race.

But in the quarters, Benjamin Karl of Austria, seeded ninth after the qualification, upset Lee by 1.20 seconds.

Karl went on to finish in second place behind countryman, Arvid Auner, with another Austrian, Alexander Payer, completing the host country's podium sweep.

Lee remained at the top of the season standings with 405 World Cup points, 99 points ahead of Stefan Baumeister of Germany and Dmitrii Loginov of Russia.

The next World Cup stop will be in Simonhohe, Austria, on Friday. It will also be the final World Cup before the Feb. 4-20 Beijing Winter Olympics.

Lee was the surprise silver medalist in the parallel giant slalom at the 2018 PyeongChang Winter Olympics on home slope. He had since experienced ups and downs on the World Cup circuit, while also undergoing shoulder surgery, but he now appears to be rounding into form ahead of his second Olympic appearance at age 26.

Lee is the only South Korean athlete to win an Olympic medal in a snow event. (Yonhap)