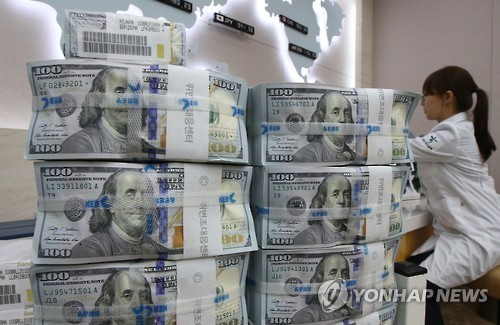 The country's foreign reserves came to $463.12 billion as of end-December, down $790 million from the previous month, according to the data provided by the Bank of Korea (BOK).

This marked the second straight month that the foreign reserves have contracted. In November, the amount dropped $5.3 billion from a month earlier.

The December decline was attributed to the redemption of maturing bonds that were issued to secure dollars for currency stabilization.

The data showed that foreign securities came to $421.69 billion at the end of December, up $750 million from the previous month. The figure accounted for 91.1 percent of total foreign reserves.

Deposits, however, fell $1.56 billion on-month to $16.63 billion in December apparently in part to the redemption of the foreign currency stabilization bonds. Gold holdings remained unchanged at $4.79 billion, according to the data.

As of end-November, South Korea is the world's ninth-largest holder of foreign reserves, one notch down from the previous month as Saudi Arabia rose to the eighth status. China led the pack by owning around $3.22 trillion in foreign reserves, the data showed. (Yonhap)