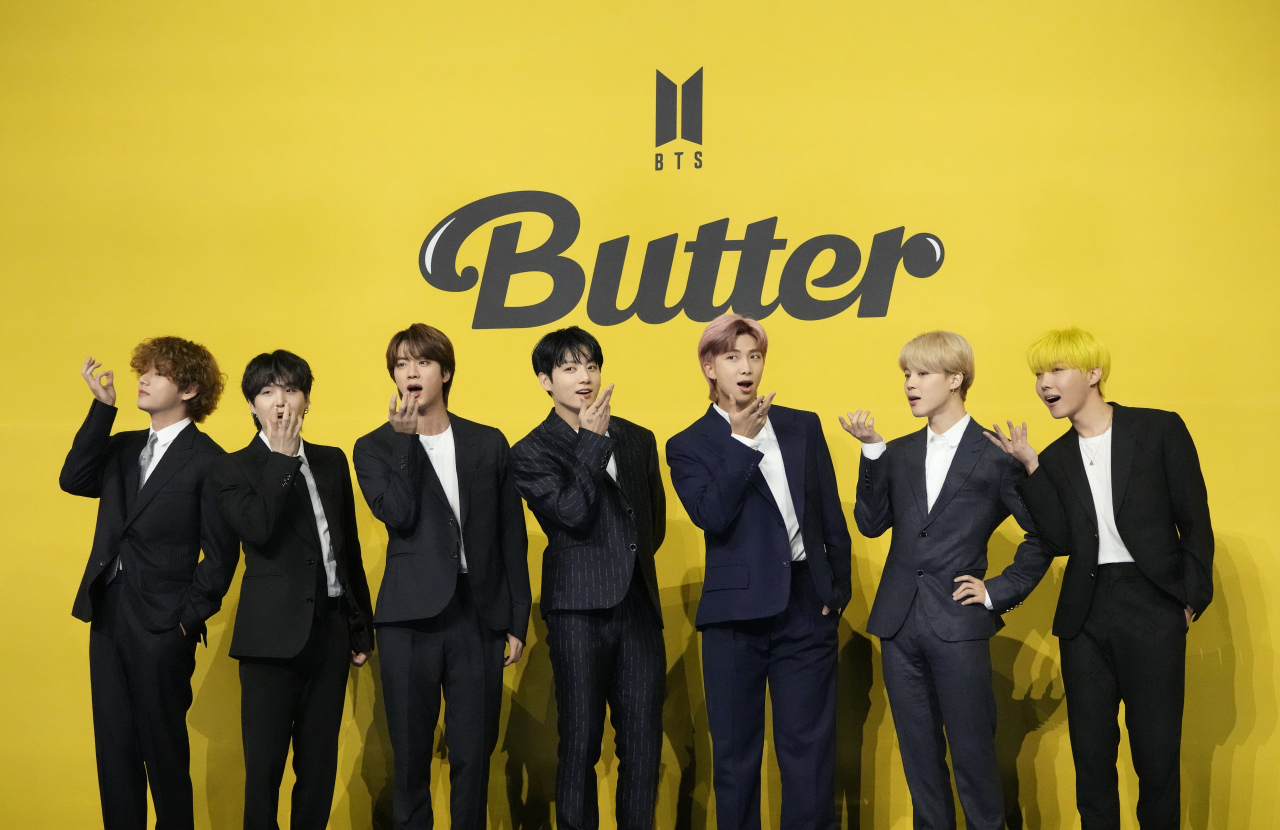 K-pop band BTS poses for photos ahead of a press conference for the release of their single “Butter” in Seoul last May. (AP-Yonhap)
K-pop has grown into a mega-sized industry with local acts becoming household names worldwide that are supported by fans from all over the globe. While the local agencies behind the artists have all expanded their businesses, Hybe, the K-pop powerhouse behind boy band BTS, is at the fore.

But BTS Army, the global fan base of the K-pop sensation, has recently expressed its anger with the entertainment firm for its aggressive expansion. Many fans are complaining that the agency is bent on making money by selling fan merchandise at inflated prices and exploring non-entertainment businesses overly dependent on BTS’ intellectual property.

Hybe started taking pre-orders for pajamas and pillows designed by band member Jin on Tuesday via Weverse Shop. The price of the products created an uproar: A two-piece pajama set and a pillow are priced at 119,000 won ($99.70) and 69,000 won, respectively. Even Jin said that the price was unexpected.

“Although I asked to use high-quality materials for the pajamas, I was surprised by the price as well,” Jin wrote on global fandom platform Weverse. Some fans who cannot afford such prices complained and asked the artist and the agency to revise the prices. In the meantime, all three products have already sold out.

“As a member of Army, I understand that the company wanted to include Jin’s efforts in the price. But since the sleepwear is made of cotton, not even silk, my affordable price for the product is around 20,000 won. ... After seeing the items being sold out already, I felt a sense of deprivation,” a 22-year-old BTS fan surnamed Lee told The Korea Herald.

A note from BTS member Jin and fan merchandise that he designed. (Weverse, Weverse Shop)
This is not the first time a controversy has erupted over BTS’ fan merchandise. In November, some fans questioned the quality of “Butter” cassette tapes they ordered after receiving items that looked different from the sample photo. The agency offered full refunds for the items after the backlash.

According to data compiled by Seoul Electronic Commerce Center, a total of 271 consumer complaints related to the Hybe’s e-commerce platform were reported in October last year. Types of complaints included delivery delays, defective products and delays in returns and refunds.

Last year, Hybe announced that it would set foot into non-music businesses, including the non-fungible token market and webtoons, web novels and Korean language learning materials featuring BTS. After the big announcement, #BoycottHYBE at one point became a trending topic on Twitter, through which fans actively expressed their opposition and anger.

Ahead of the Jan. 15 release of the first episode of “7 Fates: CHAKHO,” an original webtoon made as a collaboration between BTS, Hybe and Naver Webtoon in 10 different countries, the artists’ agency unveiled “Super Casting: BTS” as a predetermined event content. But its content took a bashing as well.

“The way Hybe seeks its business success by using BTS and fans makes me so angry. Instead of protecting its artists, I think it easily consumes the artists’ popularity. ... Continuously launching poor quality and high-priced content and merchandise is not a good idea. Fans are not the company’s automated teller machines,” a 28-year-old surnamed Kim said.

A local entertainment firm official who wished to remain anonymous also highlighted the importance of bonding with fans when agencies seek to expand fan-based businesses. To get their support and positive response, companies need to “clearly define moral obligations,” otherwise, they may drive the fans away, the official added.