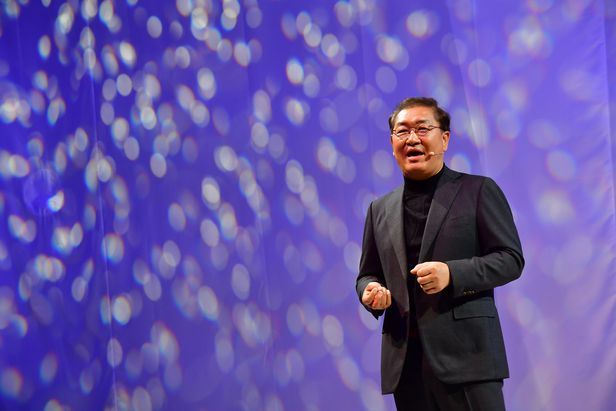 Samsung Electronics Vice Chairman and CEO Han Jong-hee (Samsung)
LAS VEGAS -- In the Year of the Water Tiger, Samsung Electronics has set out its own “Tiger” strategy to seek a more aggressive push in the North American market and narrow its gap with Apple in the cutthroat smartphone market.

Two days ahead of the opening of the CES electronics show in Las Vegas, some 40 Samsung executives gathered at a meeting in the US city to discuss this year‘s smartphone strategy with the acronym “Tiger.”

The letters individually stand for: “True No. 1 in all product categories,” “Improve flagship market share,” narrow the “Gap between Apple,” “Expanding” the presence of products such as wireless earphones, and the firm’s determination to achieve a “Record year” by reaching its targets.

The closed-door meeting was attended by Han Jong-hee, vice chairman at Samsung Electronics, Roh Tae-moon, head of the tech giant’s mobile experience, or MX, division, and Park Hark-kyu, chief of operations of the firm’s end products division, known as SET.

Opening with a short New Year’s address from Han, Roh‘s presentation followed in English, laying out details for his mobile experience vision.

“Our MX vision is to shift from a smartphone vendor to an intelligent device company. We will not be a tech brand, but a brand beloved by young generations, providing innovative experience,” Roh said.

Playing a video clip, which contained constant roaring sounds of a tiger throughout, executives urged a concerted effort to achieve No. 1 in all product categories, increase the market share of premium products over $600, induce users to convert to Galaxy smartphones, bolster the presence of electronics accessories such as wireless earphones and make 2022 a record year.

Samsung’s Tiger strategy appears to be reflecting the tech giant‘s sense of urgency for losing ground to cheap low-end smartphones.

In China, the world’s largest smartphone market, Samsung has near zero presence. The tech company’s market share in the Chinese smartphone market stood at 0.5 percent in the first half of last year, which was a 0.7 percentage-point drop on-year, Counterpoint Research data showed.

In India, the world’s second-largest smartphone market after China, Samsung’s market share has been on decline. Samsung‘s margin line of 20 percent market share was compromised in the second half of last year, Sino Research suggests. The company eventually yielded its second place to a Chinese smartphone manufacturer Realme in October.

But in the premium smartphone markets of North America and Europe, Samsung is doing better than ever, partially benefiting from the absence of LG, which decided to call its smartphone business quits.

According to Strategy Analytics, Samsung reclaimed its top spot in both the North American and European markets from Apple and Xiaomi in the third quarter last year.

Samsung’s focus on expanding the market share of its flagship models is based on the success of Galaxy Z Fold3 and Flip3. Despite their hefty prices, they sold well last year. Galaxy Z Flip 3 was among the bestsellers in the North American market, falling slightly short to enter the top 5 list by sales. With its Galaxy Z lineup, Samsung is expected to narrow the gap with Apple in the global market.