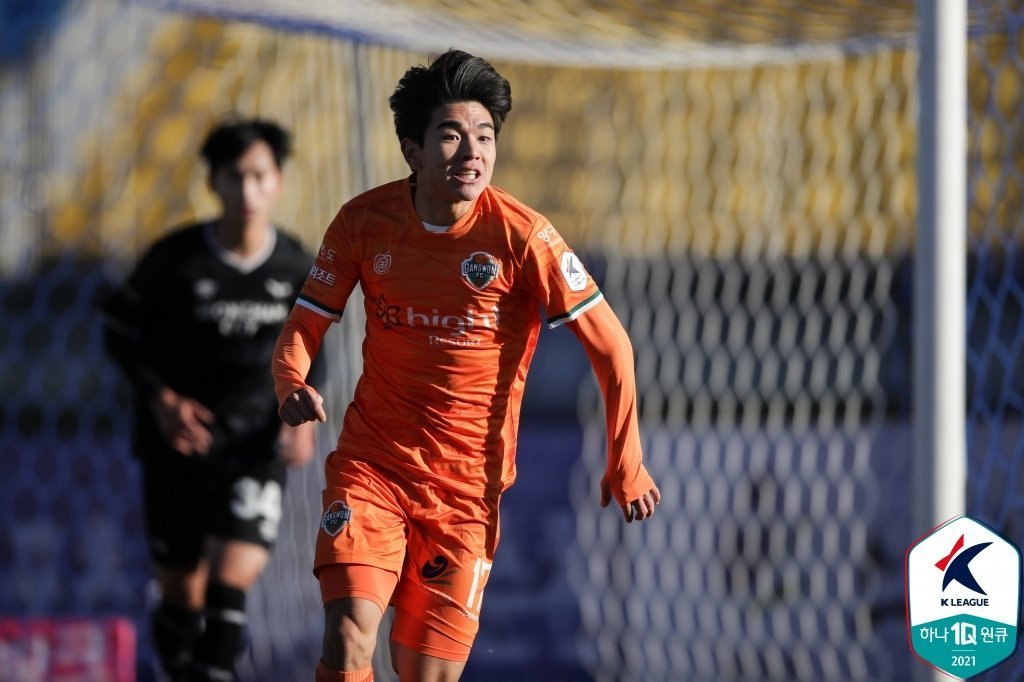 Kim Dae-won of Gangwon FC celebrates his goal against Seongnam FC during a K League 1 match at Songam Sports Town in Chuncheon, 85 kilometers east of Seoul, on Dec. 4, 2021. (Korea Professional Football League)
South Korean club football will have an additional promotion-relegation playoff in 2022, providing an extra second-division club with a chance to compete with the big boys.

The Korea Professional Football League (K League) announced a few changes to the competition for the 2022 season Tuesday. On the top of the list was the new playoff round after the end of the season with a spot in the K League 1 at stake.

Until last season, the winner of the K League 2 earned an automatic promotion to the K League 1. From the K League 2, the No. 3 and No. 4 teams met in the first round of the playoffs, and the winner went on to face the No. 2 team in the next round. The winning club of that match then played the 11th-ranked team from the K League 1 in the promotion-relegation playoff, where the winner would get to play in the top division the following year.

Under the new setup, the K League 2 winner will still grab the direct ticket to the K League 1, but there will be two promotion-relegation playoffs.

The expansion of the promotion opportunity is in part due to the addition of a new team in the K League 2, Gimpo FC, to be based in Gimpo, about 30 kilometers west of Seoul.

The league's board of governors is expected to give its final stamp of approval on Gimpo FC sometime in January. The K League 2 schedule will then expand from 36 matches per club last year to 40 matches per club in 2022. (Yonhap)