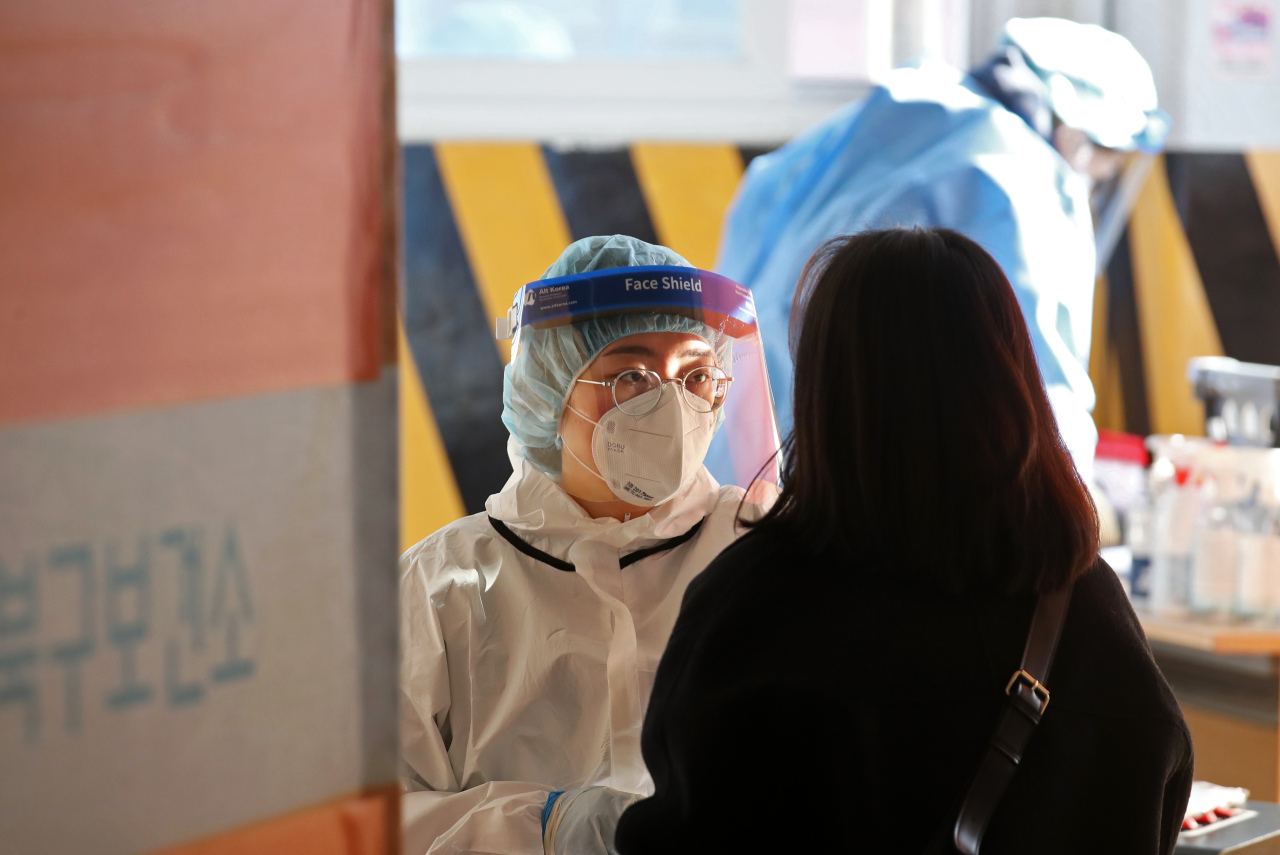 A healthcare worker wearing protective gear takes a sample from a patient at a local COVID-19 testing center. (Yonhap)
South Korea’s new coronavirus cases remained below 4,000 for the second straight day as of midnight Sunday, but the number of critically ill patients continued to surpass 1,000. Two deaths in connection with the omicron variant of the coronavirus were reported on Monday.

According to the Korea Disease Control and Prevention Agency, South Korea added 3,129 new COVID-19 cases during Sunday, raising the total to 642,207. It was down from that of the previous day, which recorded 3,833 cases.

The infection figures this weekend were also down from those of last weekend, when they reached 5,418 on Saturday and 4,207 on Sunday.

But, the number of critically ill patients reached 1,015, marking the 14th consecutive day the number was above 1,000.

On Sunday, the country also added 36 more deaths, raising the COVID-19 death toll to 5,730, the KDCA said. The fatality rate stood at 0.89 percent.

The pace of the COVID-19 spread has slowed down. But, the government will maintain tighter social distancing curbs for two more weeks. The restrictions, including a four-person cap on private gatherings across the nation and a 9 p.m. business hour curfew on cafes and restaurants, will run through Jan. 16.

The social distancing curbs were originally supposed to end Sunday, but the government decided to extend the enforcement of those rules to further mitigate risks of COVID-19 spread.

As of midnight Sunday, the KDCA said it confirmed 111 more omicron variant infections, bringing the total omicron cases to 1,318.

Two deaths related to omicron variant of the coronavirus were reported on Monday, reportedly the first deaths in the country linked to the highly transmissible variant, officials said.

Health authorities in Gwangju said two recently deceased coronavirus patients in the city, both in their 90s, have posthumously tested positive for the omicron variant. The patients, who died last Monday and Wednesday, respectively, both tested positive for COVID-19 at a senior care hospital in the city at an earlier date.

Meanwhile, starting Monday, the so-called vaccine pass, digitized proof of full vaccination, will be valid only for six months.

Under the new rule, the passes will expire six months after the completion of the first vaccination cycle. A booster vaccine would extend its validity for another six months.

Those who have not extended their vaccine passes will no longer be able to use multiuse facilities, such as restaurants, cafes, theaters and cram schools.

This measure will also be applied to department stores and large discount store chains, starting on Jan. 10.

The government’s decision to limit vaccine pass’s validity to 6 months, however, continues to face backlashes from some people.

The plaintiffs currently argues that the vaccine pass mandate restricts unvaccinated people‘s freedom of movement, thus discrimination against them.

As of midnight Sunday, 42.6 million people, or 83 percent, of the country’s 52 million population have been fully vaccinated. A total of 18.5 million people, around 36 percent, have received booster shots, according to the KDCA.