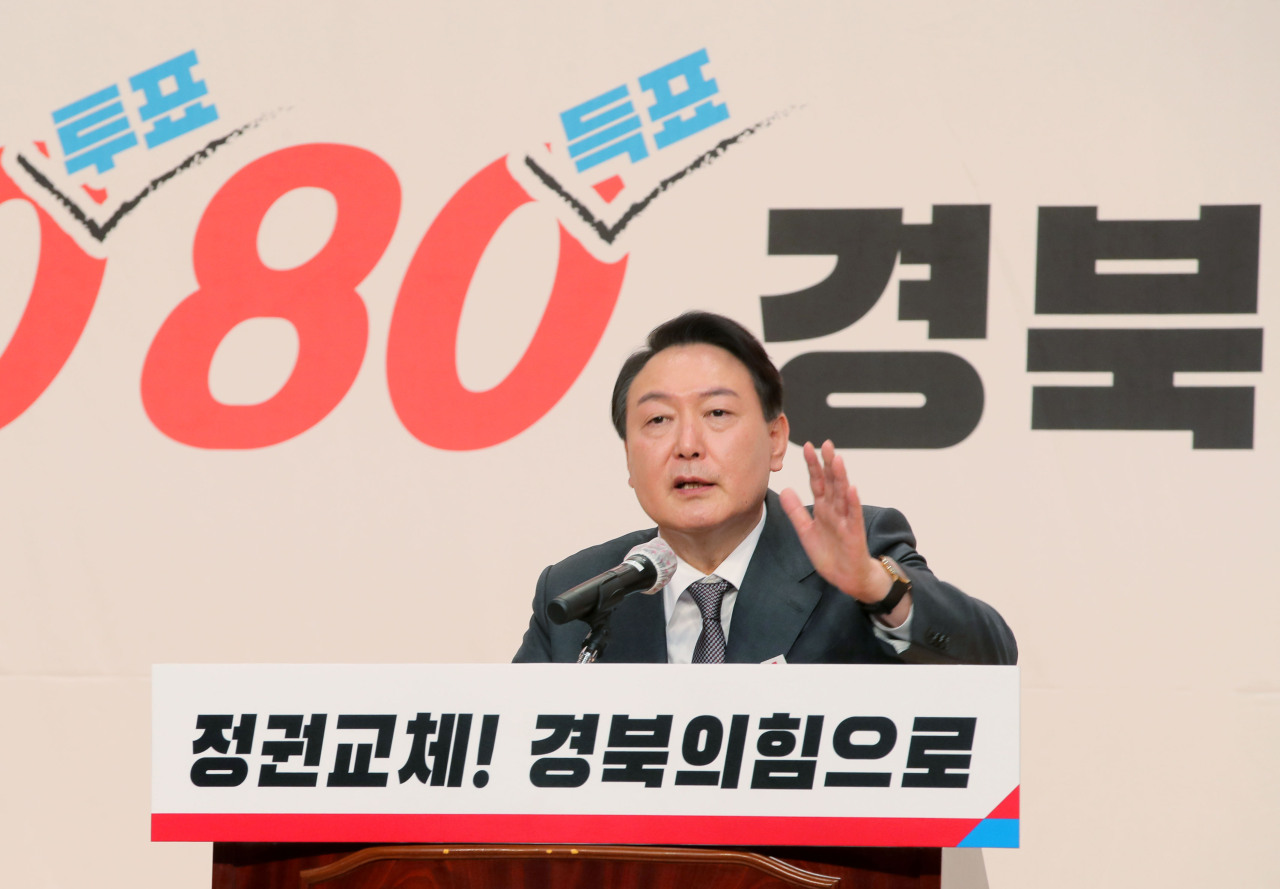 People Power Party candidate Yoon Seok-Youl speaks at a campaign event in Andong, North Gyeongsang Province on Wednesday. (Yonhap)
The conservative opposition People Power Party‘s presidential candidate Yoon Seok-youl asked the rhetorical question on Wednesday if he is an “idiot” to take part in a TV debate with his liberal rival Lee Jae-myung. His remark has now become a viral meme in online communities.

At a campaign event on Wednesday in Andong, a conservative stronghold, Yoon dismissed a proposal by the candidate from the ruling Democratic Party to debate him.

“The Democratic Party candidate wants us to debate. Am I an idiot?” Yoon said to a cheering crowd.

His remark made its way onto Blind on Thursday, an anonymous mobile message board for workers, in the form of a poll that returned his question to the platform’s users.

On Twitter, posts mocking the candidate’s remark have been uploaded.

In an apparent swipe at Yoon, Lee said refusing to take part in debate would be easily interpreted as “rejecting democracy” in a Facebook post on Monday.

The meme comes as Yoon’s approval ratings among young voters has fallen in recent polls after a series of gaffes.

According to a Gallup Korea poll this week conducted at the request of local newspaper Seoul Shinmun, Yoon’s approval rating stood at 30.8 percent, trailing behind his opponent Lee by 6 percentage points.

Among those in their 20s and 30s, the gap between the two was even wider, with Yoon’s ratings standing at 9.5 percent and 18 percent respectively, while Lee’s ratings were 24.5 and 34.3 percent.

Yoon was ahead of Lee by nearly 20 percent among people aged between 18 and 29 in a Real Meter poll released early November.

He was also accused of disparaging poor people in a comment earlier this month. “Those in poverty and who are uneducated do not know what freedom is and why it is necessary,” he said.

Yoon also came under fire after suggesting that South Korea’s pro-democracy movement during the 80s was driven by an “ideology imported from some foreign country.”