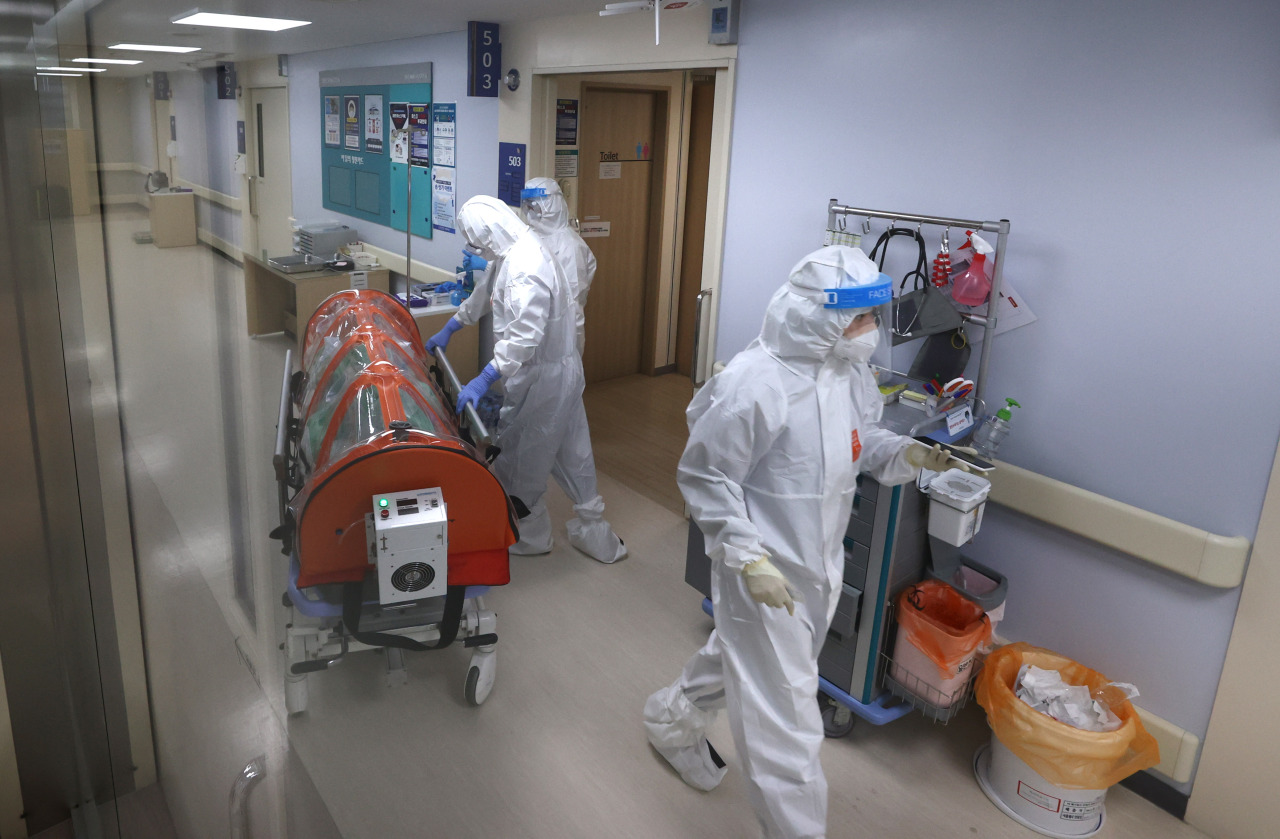 Son Young-rae, spokesperson for the Ministry of Health and Welfare, told reporters Wednesday that, “Based on important metrics, one thing appears certain: The current surge is on a decline, or in the early days of a decline at the very least.”

Son made a similar assessment in last week’s press briefing that the reintroduction of restrictions, combined with a wider distribution of booster vaccinations, was translating to a “definite slowdown in cases.” “I think it’s safe to say that we have entered a downward phase,” he said.

Korea lifted almost all restrictions for about a month and a half from Nov. 1 through mid-December, during which cases soared and hospitals were filled to near capacity. During the period at least 58 patients had died waiting for a hospital bed, ministry records show.


Has the peak passed?


Infectious disease professor Dr. Kim Woo-joo of Korea University said it remains to be seen whether the post-reopening surge is subsiding, citing a drop in test numbers days leading to and after the Christmas holiday weekend.

In the latest 24 hours ending Tuesday at midnight, Korea carried out 196,472 tests, down from 218,299 a day prior -- which was already considerably less than more than 270,000 to 300,000 tests performed a week ago. The decline in testing over the week coincides with a similar decline in cases, Kim pointed out.

“The holiday season and the cold wave coupled with heavy snow seem to have led to a smaller turnout at testing centers, which are almost invariably set up outside,” he said.

Kim said the daily case counts would need to be brought down to the 3,000-something range in order to give the health care systems “some room to breathe.” “Our hospitals could handle about up to around 3,000 cases occurring a day without having to resort to limitingICU stays or at-home recovery for elderly patients,” he said.

Infectious disease expert Dr. Eom Joong-sik of Gachon University Medical Center, a state-designated COVID-19 hospital, agreed that at this rate, social distancing of some intensity would need to last much longer, possibly beyond January next year, for the burden on hospitals to start easing.

Although cases have come down from a peak of 7,000-something cases in mid-December to 5,409 cases on Wednesday, Korea once again broke the record for critical care hospitalizations. By Tuesday midnight’s count, there were 1,151 patients classified as having “severe or critical COVID-19” in the country, the Korea Disease Control and Prevention Agency situation report showed.

Nationwide, 74.9 percent of all critical care beds for COVID-19 patients still remained occupied by Tuesday afternoon, inches from the threshold of 75 percent set by public health officials for signaling an “emergency situation.” In the Seoul area the rate was higher at 78 percent.

“New cases are ‘leading indicators,’ and there is usually a lag time of two to three weeks before the trend in the case rate is reflected in hospital admissions,” Eom said.

While the most recent modeling by the national disease control agency predicted daily cases falling to about 4,700 by late January, this calculation did not include the impact of omicron, he added.


Around a month after the first cases were detected Dec. 1, confirmed omicron cases in Korea have risen to 558, with 252 of them in arrivals from overseas and the other 306 mostly being among their contacts.

Officially, omicron is still far from being the dominant strain here, but the actual scale of its community transmission would “naturally be larger” than that reflected by the official numbers, according to Dr. Paik Soon-young, an emeritus professor of microbiology at Catholic University of Korea’s College of Medicine, citing the discovery of “untraceable cases,” among other aspects.

So far there have been seven omicron patients registered in five different cities and provinces whose routes of transmission could not be traced -- meaning the source of their infection remains unknown -- the latest available update issued Monday showed.

“In the US, for example, it took less than a month for the omicron rate to hit 90 percent. Omicron accounts for about 2 to 3 percent in Korea. But based on its ‘doubling time’ -- the time it takes to double its presence -- seen elsewhere in the world, I think it’s safe to assume it is more widely spread among us,” Paik said.

New PCR test kits targeting omicron are to become available soon, disease control authorities say, which will be distributed to public health research institutes at each of the 18 municipalities across the country from Thursday. Dr. Hong Kiho, a laboratory medicine professor at Severance Hospital, said the new tests will allow the country to flag omicron cases “much more rapidly.”

Hong said currently testing positive cases for omicron takes at least a day or two. “With the omicron-targeted test kits, they can be done in two to three hours. So we’re going to be saving a lot more time identifying and isolating the variant cases.”

All passengers will be required to present results of PCR tests taken within 72 hours of arrival and to isolate for 10 days, regardless of their vaccination status.

On the decision to keep the border restrictions, the agency explained 78 percent of known omicron cases were linked either to overseas arrivals or were people who had come into contact with them.