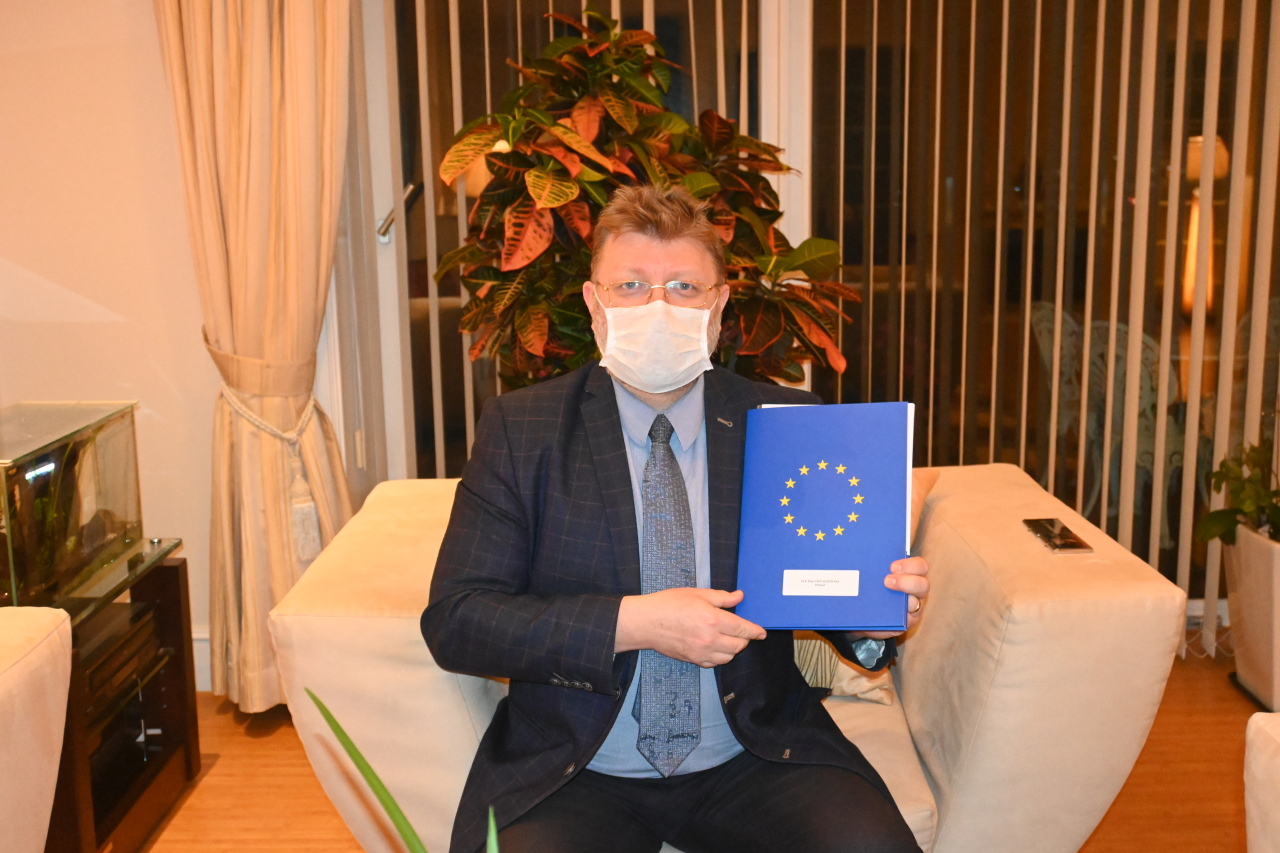 Polish Ambassador Piotr Ostaszewski speaks during a recent interview with The Korea Herald at his residence in Sungbuk-gu. (Sanjay Kumar/The Korea Herald)
Polish Ambassador to Korea Piotr Ostaszewski defended his country’s actions on the Poland-Belarus border, saying the current situation was not just a migration issue but a political crisis stirred up by the Aleksandra Lukashenka regime as retaliation for European Union sanctions against Belarus.

Thousands of migrants, mostly from the Middle East are stranded on the Belarusian side of the border trying to cross into Poland. The United Nations last week called on the two countries to address the matter, pointing to freezing conditions and limited access to food, water and shelter.

Calling it Poland’s most serious crisis in 30 years, Ostaszewski said during an interview with The Korea Herald that Belarus’ actions in the crisis were intended to destabilize and adversely affect the EU’s security.

Poland sees its neighbor’s actions as revenge, according to the ambassador. The Polish government supported the democratic aspirations of Belarusians after the presidential election of 2020.

“It is revenge against Poland, the EU and NATO,” he said.

According to Ostaszewski, Poland is witnessing organized activity supported by special forces on the Polish-Belarus border.

The people who are on the Polish-Belarus border are not refugees, but migrants, Ostaszewski argued.

“And Belarus is responsible for their situation,” he said.

Ostaszewski stated that Poland abides by rules and principles on asylum policy, and seekers could legally apply for asylum by placing a request and waiting for the results. But he said that forceful attempts to cross the border were not a legal approach to this.

“Humanitarian aid is very important, however, everything should be based on legal procedures,” the ambassador said. He applauded the Syrian, Iraqi and Turkish airlines that suspended flights transporting migrants to Belarus.

“Approximately thirty-five hundred migrants moved back to their countries, several thousand still remain in Belarus. It should be emphasized that even during the 2015 crisis there was no Eastern-Central European migration trail,” he said.

According to Ostaszewski, the current crisis could be resolved through information on legal entry and denouncing forceful attempts to cross the border.

The ambassador denied the claim that the Belarusian government was focused on the relief of human suffering and helping people find better places to live, while Poland and the EU were trying to prevent them achieving their goals and abstain from helping them.

Rather, the Belarusian president took advantage of the difficulties and harsh living conditions in certain parts of the Middle East and is now using migrants as "human bullets” to exercise pressure on Poland, the EU and NATO.

“Poland is a member of the European Union and NATO and Polish eastern border means the outer border of both of them. Protecting it means to repel all the activities aimed at the destabilization of the European order and NATO Pact. Simultaneously Russia is concentrating its troops along the Ukrainian border,” the ambassador pointed referring to Genadij Gerasimov doctrine on hybrid warfare.

According to a press statement from the Polish Embassy, the Polish Border Guard reported 461 illegal attempts to cross the Polish-Belarusian border, compared to 570 the week before.

The statement stated that, as of Dec. 19, Polish authorities recorded 39,293 illegal border crossing attempts from Belarus this year, of which 33,541 were prevented.

On Dec.14, Polish Border Guards, with firefighters from the north-eastern and eastern towns of Michalowo and Narewka, conducted long rescue operations to help four migrants spotted by drones from Syria and Iraq trapped in swamps, it stated.

Journalists have reported obstructions to reporting freely in Poland, particularly on the border crisis.

The ambassador said in response that journalists could freely report in Poland, but the border crisis was a special case. He attributed this to the state of emergency in 183 places within two provinces near the border.

“Currently Polish President Andrzej Duda signed an amendment to the bill on border protection. The border guard commander would be allowed to issue a permission for journalists,” he said.