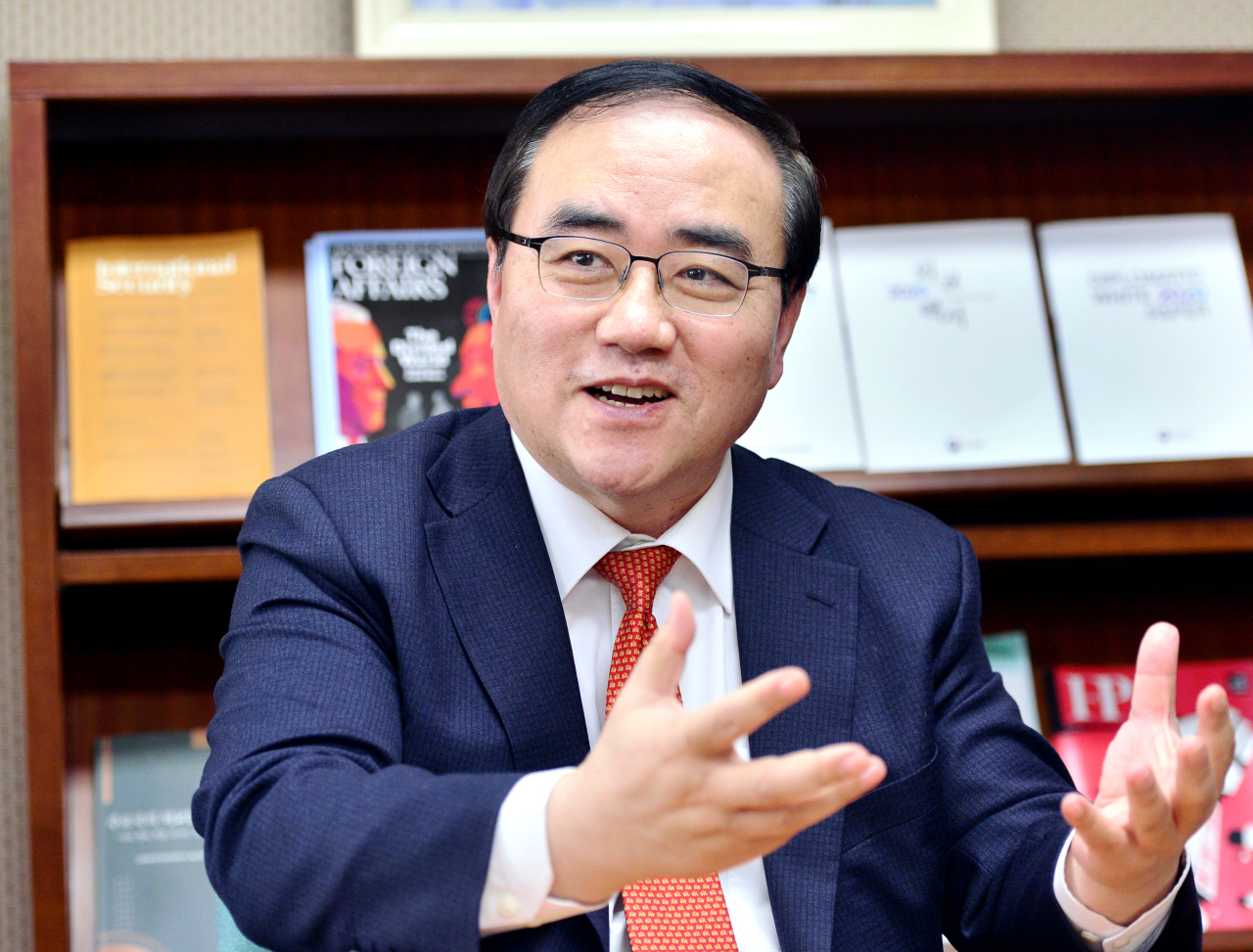 Professor Kim Sung-han of Korea University’s Graduate School of International Studies, who serves as the key foreign policy adviser for Yoon Suk-yeol, speaks during an interview with The Korea Herald at his office in Seoul. (Park Hyun-koo/The Korea Herald)
A policy of “strategic ambiguity” has guided South Korea’s diplomacy over the years, with Seoul seeking to juggle relations with its security ally Washington and key trade partner Beijing.

But this precarious balancing act may no longer be sustainable, according to a key foreign policy adviser to the main opposition People Power Party’s presidential nominee.

In an interview with The Korea Herald, Korea University professor Kim Sung-han, who advises Yoon Suk-yeol, said Seoul needs to replace the deliberately ambiguous policy with one of “strategic clarity,”.

“Korea’s foreign policy needs to be less ambiguous and more predictable. This is in regards to our dealings with China, and also with North Korea,” Kim told the Korea Herald.

“We have to be clear on what we can do and what we cannot do for both China and North Korea.”

The policy of “ambiguity” and “equidistance” between the US and China risks losing credibility on both sides, said Kim.

“In diplomacy, there are areas where ambiguity is needed to a certain extent. But if there’s too much, no one can trust us,” he said.

Kim says the South Korea-US alliance should be at the core of Seoul’s foreign policy. His stance echoes that of Yoon, who has stressed strengthening the alliance with Washington.

But this doesn’t mean Seoul will turn its back on Beijing, Kim said, as China is an important strategic partner that Korea needs to cooperate with on many fronts. For example, the two countries can expand cooperation on trade, culture and people-to-people exchanges, as well as climate change, public health and nuclear non-proliferation -- areas where US President Joe Biden has said that the US and China have overlapping interests.

And, the issue of Pyongyang’s nuclear programs is one that requires cooperation with China, the North’s ally.

“We should depart from the perceived structure that better Seoul-Washington relations are bound to worsen Seoul-Beijing ties.”

Considering the complexity of the geopolitical environment, Seoul needs to take an issue-by-issue approach to the intensifying US-China rivalry. But such decision-making should be based on “clarity” and the Seoul-Washington alliance, Kim stressed.

Seen as efforts to align closer to Washington, Yoon had dangled the possibility of joining the US-led Quadrilateral Security Dialogue.

“Yoon’s position is that South Korea should first join the Quad’s working groups, including on vaccine distribution, climate change and critical and emerging technology,” said Kim. “And when the appropriate time arrives, Seoul could join the so-called Quad Plus for a full membership later, with the blessings of the member states.”

Kim says there is a need to expand communication and sharing of information with the US on how it will provide its promised nuclear umbrella over Seoul in case of a nuclear strike from Pyongyang. This request is in light of growing public doubt here on whether the US’ extended deterrence -- which includes the US nuclear umbrella, missile defense and conventional strike capabilities -- could be trusted at a time when Pyongyang has been doubling down on its nuclear and missile programs.

While Kim said he understands Washington’s reluctance to share details of its nuclear capability and decision-making process, “Seoul needs to know at least at a basic level on how the US will operate its nuclear weapons in an emergency,” as it is a matter of national security.

There is already a consultative body between the two countries, called the Extended Deterrence Strategic Coordination Group, which was established in 2016 to improve understanding of the US extended deterrent.

But the group has held high-level talks only twice, the last in 2018, at a time when Seoul was seeking to engage Pyongyang. Kim called the need to regularize this meeting so that the two sides can discuss Washington’s nuclear capabilities, decision-making progress and likely scenarios. Once Seoul is in the loop, even at a partial level, there would be more certainty in the credibility of the US’ extended deterrence.

For years, conservative politicians here have either called for the redeployment of US tactical nuclear weapons and a NATO-style nuclear sharing arrangement with the US to deal with the prospect of a nuclear conflict with Pyongyang. But Yoon maintains his stance that such a request is “unrealistic.”

Policies for North Korea’s denuclearization may be one of the areas where Yoon collides with his archrival Lee Jae-myung of the liberal ruling Democratic Party of Korea. Unlike Lee, who is widely expected to continue incumbent President Moon’s policy of engagement with Pyongyang, Yoon signaled a more hardline approach on the reclusive regime.

Kim said that Yoon will present a very clear, step-by-step road map toward the full denuclearization of North Korea, which will compensate North Korea at each step of the way.

According to this road map, North Korea needs to do something significant and difficult upfront, said Kim. The action needs to amount to “substantial denuclearization steps,” such as freezing its nuclear program and accepting the International Atomic Energy Agency’s inspection, that shows Pyongyang is serious about denuclearization.

“But sanctions on North Korea should not be removed until North reaches a denuclearization stage that is irreversible,” said Kim, adding this was the area where it contrasts with Lee’s policy.

Lee proposes conditional easing sanctions against Pyongyang with a “snapback” provision -- meaning the sanctions could be reimposed if the regime failed to keep its promises.

“We could provide economic assistance that is on par with (the effect of) sanctions, but sanctions shouldn’t be lifted. Because once they are eased, it is difficult to reimpose them, and the North will have no incentive to denuclearize,” Kim said.

North Korea’s economic situation is dire, with much of its population suffering from hunger and malnutrition, Kim believes the North will seek outside help if its situation worsens.

In the meantime, Seoul should not offer concessions when Pyongyang appears uninterested -- such as proposing to declare an end to the Korean War.

But providing humanitarian aid to the North could happen at any time, regardless of progress on denuclearization, Kim said, considering the hardship North Korean citizens face amid the worsening humanitarian situation in the country.

Kim said Yoon is open to meeting with North Korean leader Kim Jong-un, but not indoing it “for show.”

“Yoon will only be willing to meet Kim if there is a major agenda and a prospect of significant progress through the summit,” he said.

The professor also proposed opening a trilateral liaison office among the two Koreas and the US, stressing that Seoul should be a primary actor in dealing with Pyongyang’s nuclear weapons.

Yoon has vowed to improve the relations with Japan, and has proposed reaffirming the 1998 joint pledge between then leaders President Kim Dae-jung and Prime Minister Keizo Obuchi.

The landmark agreement included Japan’s apology for its colonial rule and a pledge to overcome historical issues and create a “future-oriented” relationship.

“Seoul received a heartfelt apology from Tokyo, and in return, provided a future to Tokyo through the declaration,” said Kim. He said this same formula could still work today.

But he noted that an immediate breakthrough could be difficult, at least until Japan’s House of Councilors election in July, as Tokyo is unlikely to budge from its hardline stance before the election.

“After the election, there could be an opportunity. So in the meantime, we need to start consulting with Tokyo,” said Kim.

There are a number of sticking points between the two countries, including compensation for the victims of Japan’s wartime forced labor and the so-called “comfort women,” export controls and the military-intelligence sharing agreement between the two countries. Kim suggested to put all the items on the negotiation table and seek a grand bargain, rather than solving each issues one by one separately.

Kim suggested that if it was difficult to break an impasse, the two countries could at least go for a “two-track” approach in which historical disputes are separated from security cooperation.

“Frayed ties with Tokyo are a setback for Seoul’s diplomacy,” said Kim. “Especially at a time when trilateral cooperation between the two countries and the US is critical in dealing with various challenges.”