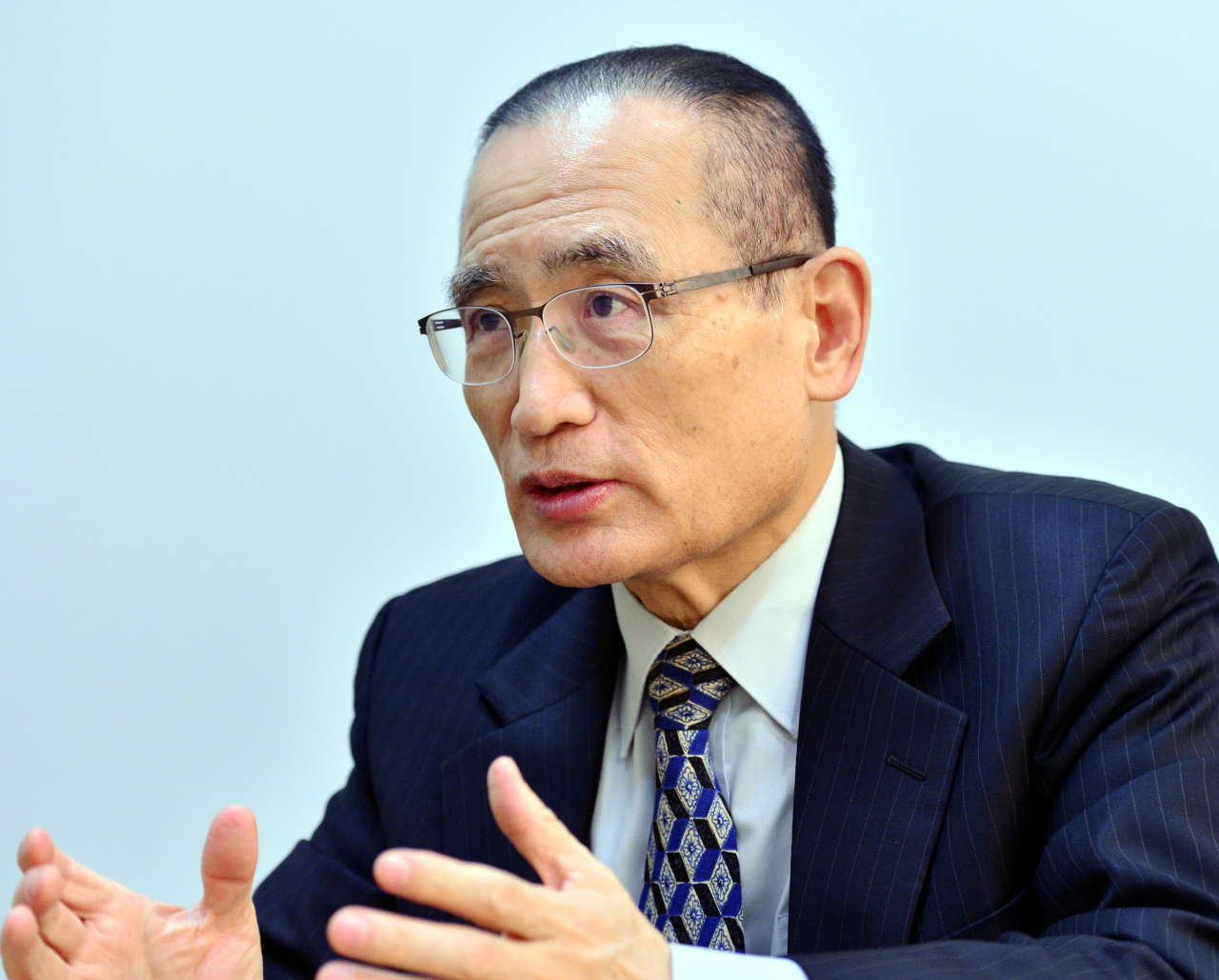 Former South Korean Ambassador to Russia Wi Sung-lac, who chairs the foreign affairs committee of Lee Jae-myung’s presidential campaign, speaks during an interview with The Korea Herald. (Park Hyun-koo/The Korea Herald)
For years, South Korea, the US and the international community have tried to coax North Korea into giving up its nuclear and missile program. Despite a series of negotiations, headline-grabbing summits and carrot-and-stick tactics, the reclusive regime has not ceased from developing the weapons of mass destruction, but instead has been advancing them.

What the years of failed negotiations have taught us is that the North’s nuclear issue is a complex conundrum that requires a multifaceted approach, says Wi Sung-lac, former South Korean Ambassador to Russia and top foreign policy adviser to Lee Jae-myung, presidential nominee of the liberal ruling Democratic Party of Korea.

“If we want to make progress on the denuclearization track, we have to simultaneously operate the peace track as well,” Wi told The Korea Herald in a recent interview in Seoul. “The two tracks need to move in synergy and in complement to each other.”

But Wi said running the two tracks simultaneously is difficult, as there are risks that the North could “cherry pick” one over another depending on its needs. “We can’t let that happen, and have to operate the two tracks in sync,” he said.

The much talked about proposal to declare a formal end to the Korean War is a small part of this peace process, but not all of it, according to Wi. The peace treaty, establishment of peace regime on the Korean Peninsula and normalization of relations with Pyongyang take up the larger part of the peace track.

In this light, the end-of-war declaration is worthy of pursuing, as a step to the larger peace process, said Wi. But he also acknowledged difficulties in getting all the parties to sign on to the agreement, given the current security situation.

The end-of-war declaration, and approaches to denuclearize North Korea is one of main areas where candidate Lee contrasts with his archrival Yoon Suk-yeol, presidential candidate for the conservative opposition People Power Party. The two are running neck-and-neck in the upcoming March 9 election.

Lee backs President Moon Jae-in’s end-of-war proposal as a meaningful measure that could serve as a catalyst for future denuclearization and the establishment of a peace regime, whereas Yoon opposes pushing for the declaration when Pyongyang has yet to dismantle its nuclear program.

Mix of rewards, sanctions for denuclearization

Pundits view Lee is widely expected to continue incumbent President Moon’s diplomacy of engagement with Pyongyang. While there will be similar conciliatory approaches, Wi stressed that Lee’s policy anchors on “pragmatic and balanced” stance, using not only rewards but also sanctions to achieve denuclearization.

“Negotiations with Pyongyang should be flexible. But when the North conducts wrongful behavior and breaks promises, we have to respond with corresponding measures,” said Wi.

Wi, who also served as Seoul’s top envoy for North Korea’s nuclear programs, suggested the conditional easing of sanctions against Pyongyang with a “snapback clause,” which would reimpose all sanctions immediately if North Korea fails to comply with its denuclearization promises.

As part of the path toward denuclearization, Wi -- based on his years of experiences in negotiating with the North -- said a “step-by-step” process is inevitable, as the North will only be willing to agree through an incremental approach. But the number of steps has to be minimal with big chunks of agreements within each steps, to avoid the North from resorting to the so-called “salami-slicing tactic” of cutting the slices too thin to buy time while reaping the benefits from agreeing to the initial steps.

In order to denuclearize the reclusive regime, Wi stressed the need to closely work with other countries, considering the US and China have all the tools for sanctions on the North. “What we have is limited, and without help from the US and China, we can’t work alone.”

But first, inducing the North back to the stalled dialogue would be critical. The North, however, expressed reluctance in returning to dialogue, despite continuous calls for negotiation from both Washington and Seoul. Pyongyang has reiterated that it will ignore the allies’ offer of dialogue, unless the US withdraws what it calls a “hostile policy” toward the North -- apparently referring to the joint military exercises between South Korea and the US, and international sanctions.

“South Korea and the US have to put more efforts to resume dialogue with the North,” he said. “If the negotiation process doesn’t restart smoothly, the North could launch provocation, and then maybe try to return to talks after a huge outburst. This is not a desirable way to begin a dialogue.”

“Close to the US, not too far from China”

Tensions between the US and China have reached the most acute level since the two countries normalized diplomatic ties more than four decades ago, said Wi, as the rivalry looks set to escalate further next year.

So far, South Korea has been taking a “case-by-case stance” between its important ally the US and biggest trading partner China, but warned that such an approach may become more difficult as the competition and confrontation intensify between the two superpowers.

“We should begin from a simple and clear fact: The US is our ally and China is not, but a strategic partner,” said Wi. “There are more areas where South Korea shares value with the US, than China.”

Under this security environment, South Korea should set a guideline that is “closer to the US and not too far from China,” said Wi. “What’s important is to be consistent in policy that is predictable, and not changing from one to another depending on the situation.”

Wi stressed that candidate Lee views the South Korea-US alliance as the basis for Korea to develop into a new frontier, which goes beyond from the security alliance to various areas, including climate change, cutting-edge technology and the pandemic, among others.

“But there is also the reality of a rising China, with which Korea has deep economic ties,” said Wi. “China may have influence on the future of peace and unification on the Korean Peninsula, so we need to maintain a friendly relationship with China.”

Another pressing concern for South Korea amid intensifying US-China rivalry is the so-called “economic security” where economic and security issues have become increasingly intertwined with growing cases of countries weaponizing the economy for political gains.

Specifically, Washington and Beijing’s battle over technology supremacy is looming large over Seoul’s most important industries of semiconductor and battery. While Korean companies require advanced technology from the US, China is the largest market and its core manufacturing base.

As the US seeks to establish a supply chain that is more resistant and less reliant on China, it has been putting efforts to effectively corral allies, including South Korea, to join its initiative.

Wi identified that these “economic security” issues as one of the most urgent and important security challenges facing South Korea, and urged the need for the government’s better involvement.

“This is also a matter of setting the guideline on where South Korea will stand,” he said. “If the government remains ambiguous, and does not establish a right direction, it’s the companies that will have to pay the price.”

Lee called on the government to set up a control tower where it comprehensively deals with both traditional security issues and emerging security threats, such as technology and trade issues.

Importance of trilateral ties with the US and Japan

South Korea’s frayed ties with Japan over wartime history is another pressing foreign policy concern that needs to be fixed, said Wi, stressing candidate Lee views improving relations with Tokyo as an important matter. “We cannot leave the Seoul-Tokyo relations as it is, for the sake of South Korea’s national interest, for the bilateral relations, as well as for the trilateral ties involving the US and also for the power structure in the Asia-Pacific region,” said Wi. “The two sides have to make gradual steps toward resolving the past.”

He also said there is a need for an enhanced three-way security cooperation between South Korea, the US and Japan, for sharing information and intelligence, as well as dealing with the North’s nuclear problem.

In this aspect, he also saw the need to continuously operate Seoul’s military-intelligence sharing pact with Tokyo, known as the General Security of Military Information Agreement, divergent from the current Moon administration that indicated a possibility of scrapping the bilateral agreement depending on the situation.

In August 2019, South Korea decided to terminate the GSOMIA, in retaliation for Japan’s decision to tighten export controls against Seoul in response to the wartime forced labor issue. But Seoul made a last-minute decision to retreat from its planned exit from GSOMIA in response to US pressure -- and on the condition that negotiations take place with Japan on the export curbs and the forced labor issue. But Seoul had said it can end the pact at any time.