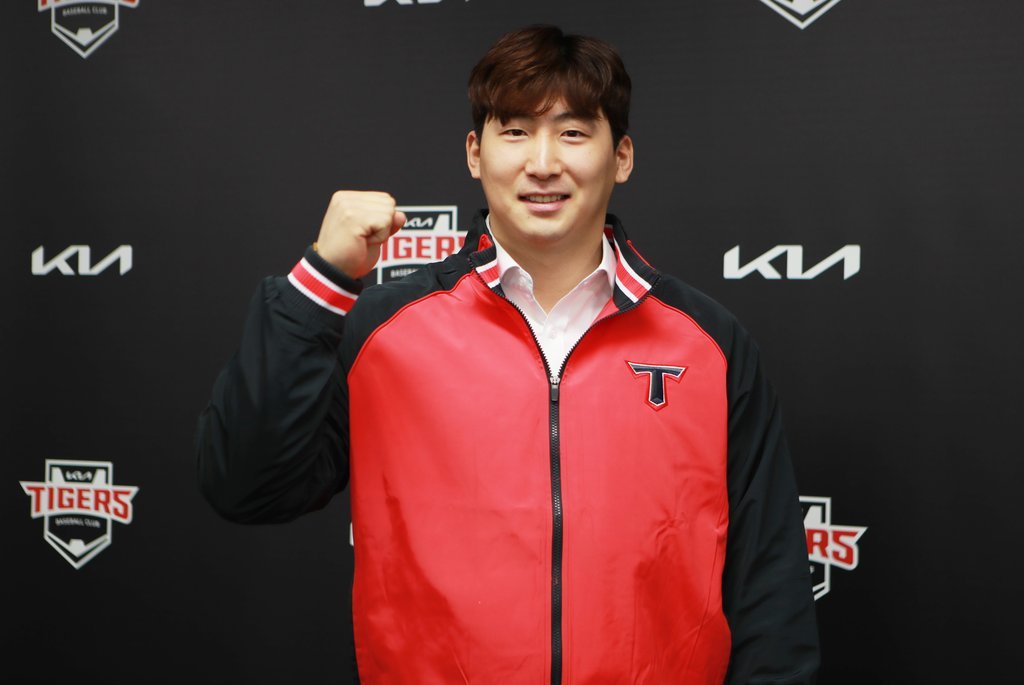 New Kia Tigers' outfielder Na Sung-bum poses for a photo after signing a six-year free agent contract with the team on Thursday, in this photo provided by the Tigers. (Kia Tigers)
South Korean slugger Na Sung-bum grew up in the southern city of Gwangju, rooting for the Kia Tigers. He would frequent their home stadium with his parents, and as a teenage prospect, his middle school and high school teams even played a few games there too.

And come 2022, Na will be playing for the Tigers. As a free agent, Na signed a six-year contract worth 15 billion won ($12.6 million) with the Tigers on Thursday, a deal that ties the record for the largest free agent deal in Korea Baseball Organization (KBO) history.

"I grew up admiring this ball club, and I've always wanted to play for the Tigers," Na said moments after his deal with the club was announced. "I wanted to don this team's jersey at some point in my career, and that has now become a reality."

Na was drafted out of college by the NC Dinos in 2011. They convinced Na to convert from pitcher to outfielder, and he carved out a successful career in his new position.

The Tigers are betting on more of the same from Na, who ranked second in the KBO this year with 33 home runs. The entire Tigers team hit a league-worst 66 home runs in 2021. They also finished last in runs scored (568) and on-base plus slugging percentage (.673).

The deal appears to be a no-brainer for both sides, with the team going hard after one of the most feared sluggers in the open market, and that same player joining his hometown team.

But Na said he made "an extremely tough decision" to leave the Dinos, the only professional club he'd known for a decade. The Dinos also made him a competitive offer, Na added.

"I got a call from Kia on the first day that I became eligible to sign with a team (other than the Dinos)," Na said. "I negotiated the deal for myself without an agent, and the Tigers were very thoughtful and considerate throughout the process."

Na's signing with the Tigers had been the worst-kept secret in the KBO for weeks. Even the specific term and the monetary figure weren't that far off from the rumored numbers.

Another persistent rumor had it that Na had already signed his contract and the Tigers had only been holding off announcing it because they wanted to get a deal done with free agent pitcher Yang Hyeon-jong, a franchise icon who wants to return to the KBO after a cup of coffee with the Texas Rangers.

The latest meeting between the Tigers and the pitcher held Wednesday produced nothing, and Na's signing was announced less than 24 hours later.

Na denied he had a deal in place long before Thursday but admitted he'd made up his mind in early December that he would sign with the Tigers.

Na said he is more concerned about proving that he is worth all the money he will get.

"I understand I will be expected to put up huge numbers to live up to this contract," Na said. "I pride myself in being a hard-working player, and I will continue to put in the work with Kia."

Also on Thursday, Na uploaded a photo of a handwritten letter to Dinos fans on his Instagram, thanking them for their support over the years and apologizing for leaving the team and its southeastern city of Changwon.

"I played for my first pro team in Changwon, and it's where I bought my first house and where my two children were born and raised," Na wrote. "Every success that I've had has been a gift from the NC Dinos. My life would have been far different if the team hadn't given me that opportunity. I will never forget that." (Yonhap)