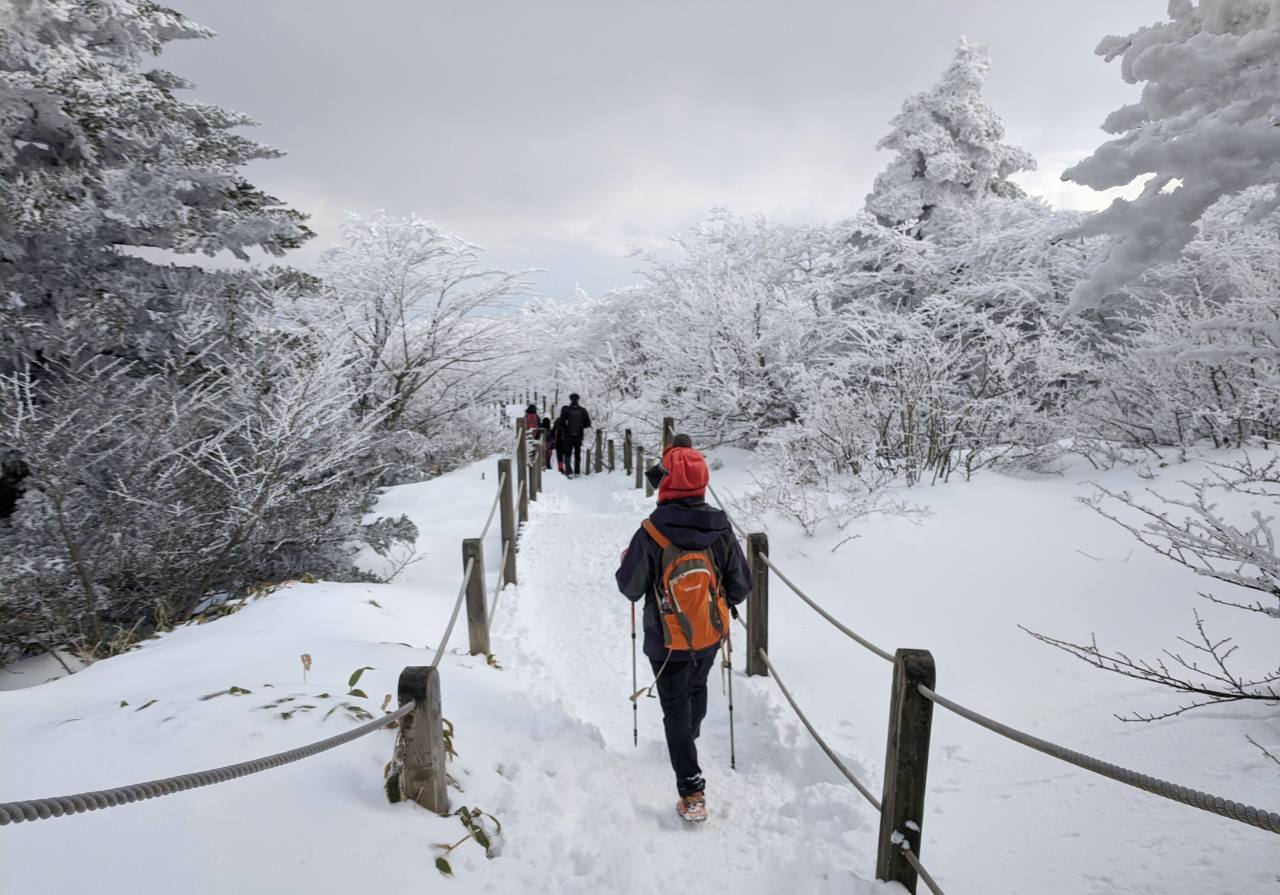 Korean Christmas trees, the abies koreana, commonly known as the Korean fir, flank the hiking trail to the Baekrokdam crater lake at the top of Hallasan, the tallest mountain in South Korea at 1,947 meters in elevation. Photo © Hyungwon Kang
Germans started it, but it was the Americans who perfected the celebration of Christmas in the 20th century.

No Christmas would be complete without a Christmas tree, and a native Korean fir, locally called “gusangnamu,” is the preferred choice of Christmas tree in homes across the US and Europe.

First encountered by Father Emile Joseph Taquet (1873-1952), a French Catholic missionary, on Hallasan, the main mountain on Jeju Island, in the early 1900s, famed botanist Ernest Henry Wilson (1876–1930), a British plant collector and explorer, documented his 1919 encounter with gusangnamu on Hallasan as abies koreana in the Journal of the Arnold Arboretum at Harvard University, the oldest public arboretum in North America.

More commonly called the Korean fir, the tree is known for its unique blue cone and is abundantly found at elevations up to 1,900 meters on Hallasan.

The Hallasan native tree thrives in cold climates -- the weather at high elevations on Hallasan can be unforgivingly harsh especially in winter.

The world’s largest Korean fir forest covers about 6 square kilometers at elevations over 1,300 meters above sea level, almost all of them inside the Hallasan National Park. 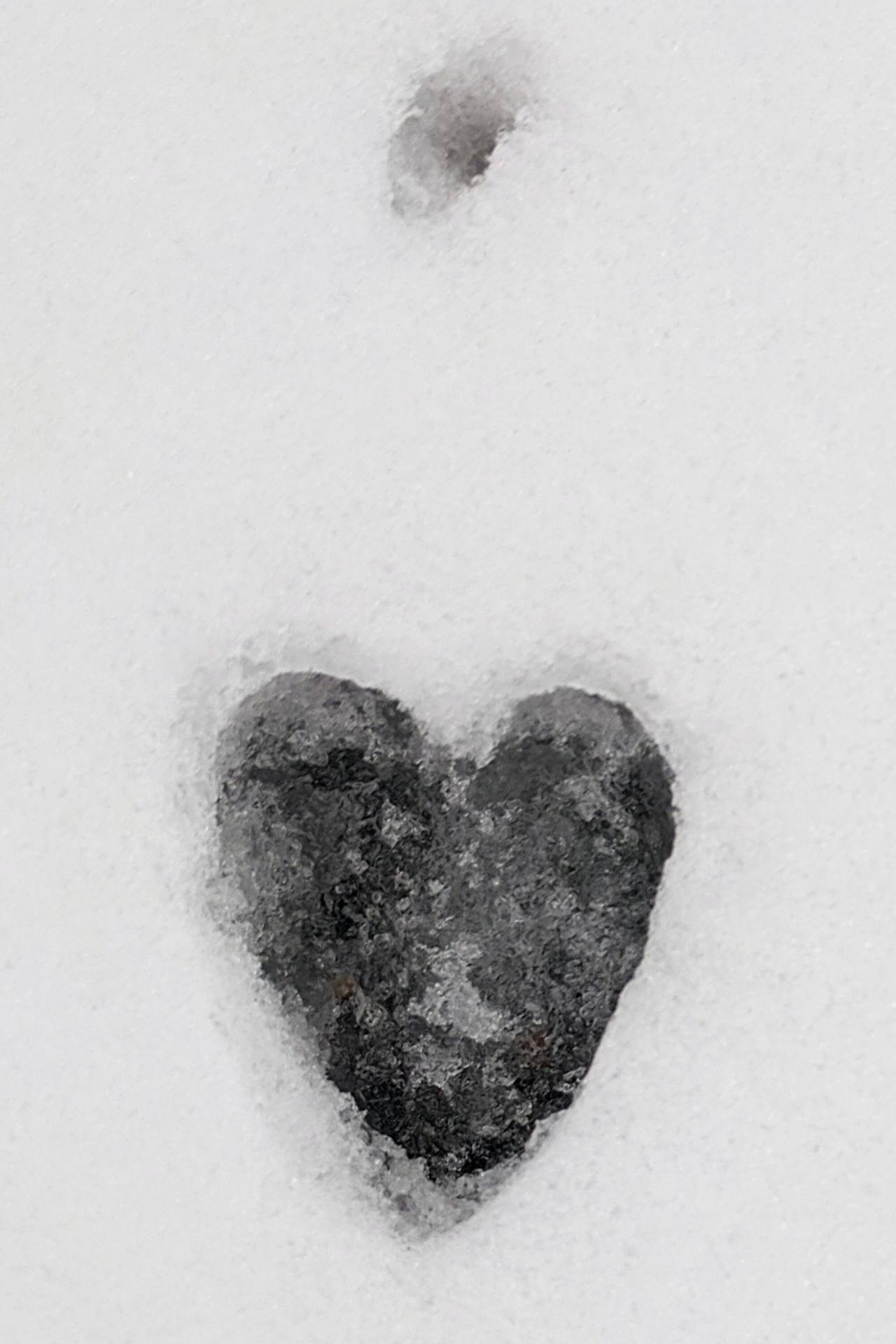 A deer footprint in the shape of a heart is seen at a snow-covered Hallasan, on Jeju Island. Photo © Hyungwon Kang
“An old-growth forest of gusangnamu, a primary forest of 100 trees, shows that the average age of the trees is about 80 years old, with the oldest tree at 158 years old,” said Kim Kwon-su, a researcher at the Jeju Self-Governing Province World Heritage Headquarters.

Gusangnamu, which used to be readily seen at elevations around 1,000 meters, have started to thin out at elevations below 1,200-1,400 meters. The prime culprit is “natural disasters such as wind effects, frequent typhoons, heavy rainfall and the reduction of snowfall caused by climate change,” according to Kim.

Recent findings show that young seedlings of the Korean fir naturally proliferate at higher altitudes, but few grow below 1,700 meters above sea level.

The Korean fir, which is widely available in the US and in Europe, makes an excellent pyramid-shaped garden tree, or “potted living Christmas tree.” 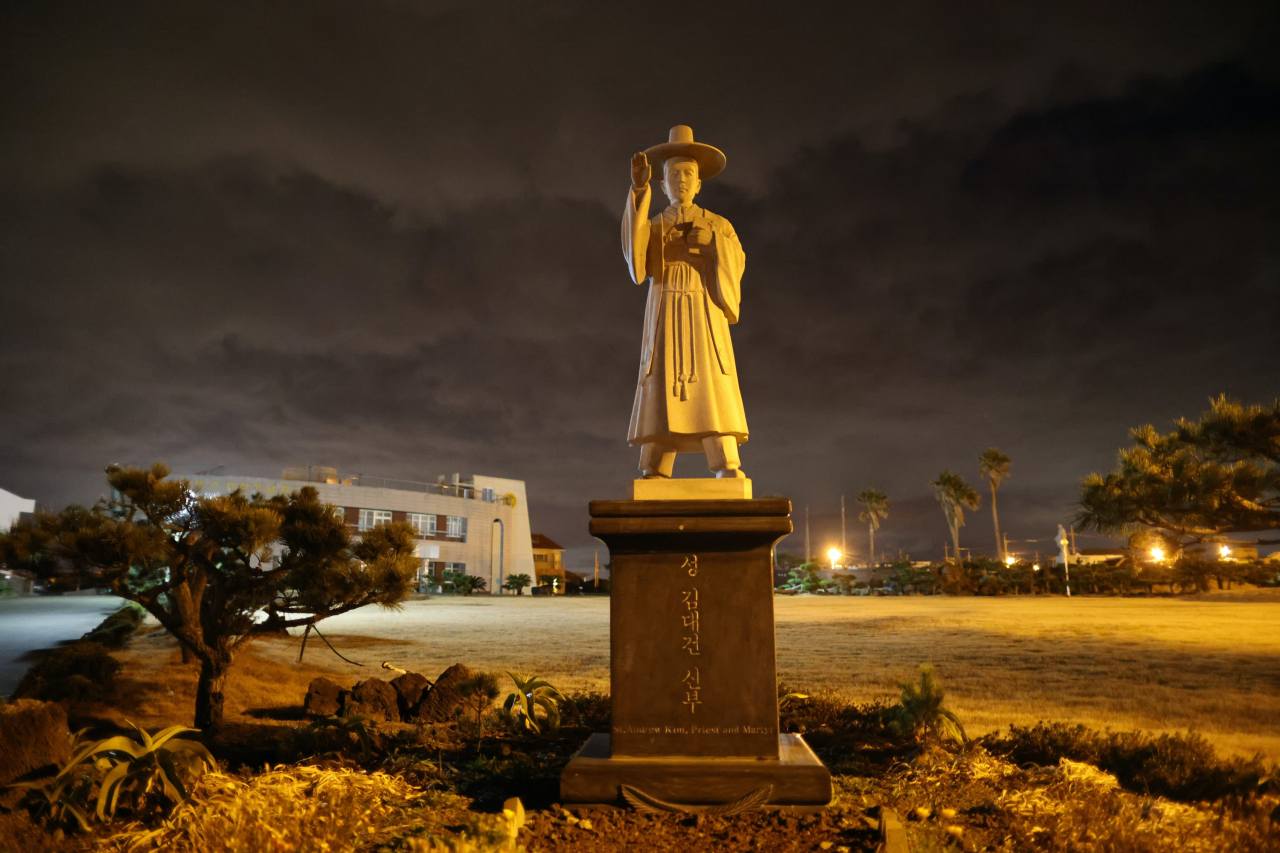 Jeju Island was the first place in Korea where Korea’s first Catholic priest landed on Sept. 28, 1845.

St. Andrew Kim Taegon (1821-1846), Korea’s first Catholic priest, was educated in Macao and in the Philippines from the age of 15, and was ordained as a priest in Shanghai in 1844 by the French bishop Jean-Joseph-Jean-Baptiste Ferreol (1808-1853). St. Andrew Kim Taegon’s great-grandfather and father had been executed for their Catholic beliefs.

When Christianity was severely suppressed in the region during the 1800s, Kim lived in Lolomboy in Bocaue in the Philippines as a seminarian, before moving to Macao to become a priest.

The first Korean Christians were yangban, or nobles, the educated elite who could read the Hanja bible imported from Qing China.

During the 19th century, Christianity was severely suppressed primarily because Joseon royalty viewed it as running counter to Confucianism, and more than 10,000 Korean Christians were executed.

When Pope John Paul II addressed the first ever canonization ceremony outside of Rome, in Korea, at the 1984 canonization of St. Andrew Kim Taegon and 102 other martyrs, the Pope noted: “The Korean Church is unique because it was founded entirely by laypeople. This fledgling church, so young and yet so strong in faith, withstood wave after wave of fierce persecution. Thus, in less than a century, it could boast of 10,000 martyrs.”

Just before St. Andrew Kim Taegon was beheaded in Seoul on Sept. 16, 1846, at the age of 25, he said, “This is my last hour of life, listen to me attentively: If I have held communication with foreigners, it has been for my religion and for my God. It is for him that I die. My immortal life is on the point of beginning. Become Christians if you wish to be happy after death, because God has eternal chastisements in store for those who have refused to know him.”