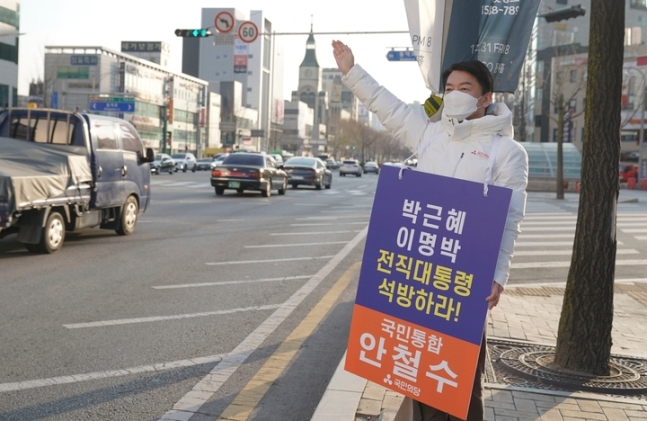 Presidential candidate and People’s Party leader Ahn Cheol-soo called for the suspension of the sentence of the two former presidents on Monday. (Yonhap)
Former presidents Lee Myung-bak and Park Geun-hye, currently serving prison terms for a number of corruption convictions, are unlikely to be included in a list of New Year’s special pardons, which could be the last of the Moon Jae-in administration.

From Monday, the Ministry of Justice began a two-day amnesty review by a nine-person committee, including Justice Minister Park Beom-kye and senior officials from related agencies. The selected list will be reported to the president and the final list is expected to be announced at the end of this month. This will be the fifth special amnesty implemented under the Moon administration and is likely to be the last under Moon considering the upcoming presidential election.

Politicians such as former presidents Lee Myung-bak and Park Geun-hye are unlikely to be included in the pardon. Park, who was president from 2013-17, is currently serving a 22-year prison term over bribery and other charges. Her predecessor Lee is serving a 17-year sentence for similar charges.

At this year’s New Year press conference, Moon mentioned that he did not review the pardon of politicians. When the issue of the two former president’s pardons was once again in the spotlight earlier this month, Cheong Wa Dae said, “It has not been discussed.”

Asked by reporters whether Park and Lee can be pardoned, Minister Park said on Monday, “A pardon is the exclusive right of the president, and nothing can be announced until the final announcement.”

The business community has demanded a special pardon for Samsung Electronics Vice Chairman Lee Jae-yong, who is on parole, but Lee is also unlikely to be included in the list.

Moon has maintained that he would not use his amnesty rights for corruption crimes, such as bribery, breach of trust and embezzlement.

Minister Park said the number on the pardon list will be of “considerable size,” and the pardon is expected to be centered on offenders who had committed crimes related to making a living.

Last month, the Ministry of Justice sent an official letter related to special amnesty to prosecutors’ offices and correctional facilities to ask for a list of offenders related to rallies and demonstrations, model prisoners and offenders who committed crimes related to making a living. The official letter reportedly mentioned people who participated in protests related to the revision of the Minimum Wage Act and the deployment of the High Altitude Missile Defense System.

Meanwhile, a local media outlet reported Monday that Park Geun-hye’s health has been deteriorating in prison. Citing legal and medical sources, Dong-A Ilbo reported that Park is “reportedly complaining of continuous pain caused by shoulder and back conditions for which she has previously undergone surgery.” The media also reported that Park is mentally unstable due to her long prison term.

Park, who has been hospitalized at Samsung Medical Center since Nov. 22, will receive treatment for the next six weeks.

The Ministry of Justice said on Monday, “(She) was originally scheduled to be hospitalized for about a month, but she will continue hospitalization for more than six weeks according to the opinion of specialists in the orthopedics, dentistry and psychiatric departments.”

Presidential candidate and People’s Party leader Ahn Cheol-soo has called for the suspension of the sentence of the two former presidents, saying they are in poor health and the suspension is necessary for national unity.

In a local radio interview Monday, Ahn said as the presidential election is now heading toward the division of the public, suspending the sentence of the two former presidents could reverse the atmosphere and change the direction toward national integration.

He suggested suspending the sentence instead of granting them amnesty, because Moon might feel a political burden in doing so. “The decision to pardon (them) can be passed over to the next president, who will judge under public consensus,” Ahn said.

According to a Gallup Korea poll last month, 44 percent of respondents agreed to granting amnesty to the two former presidents, while 48 percent opposed it. In January’s poll, 34 percent agreed and 54 percent were against it.