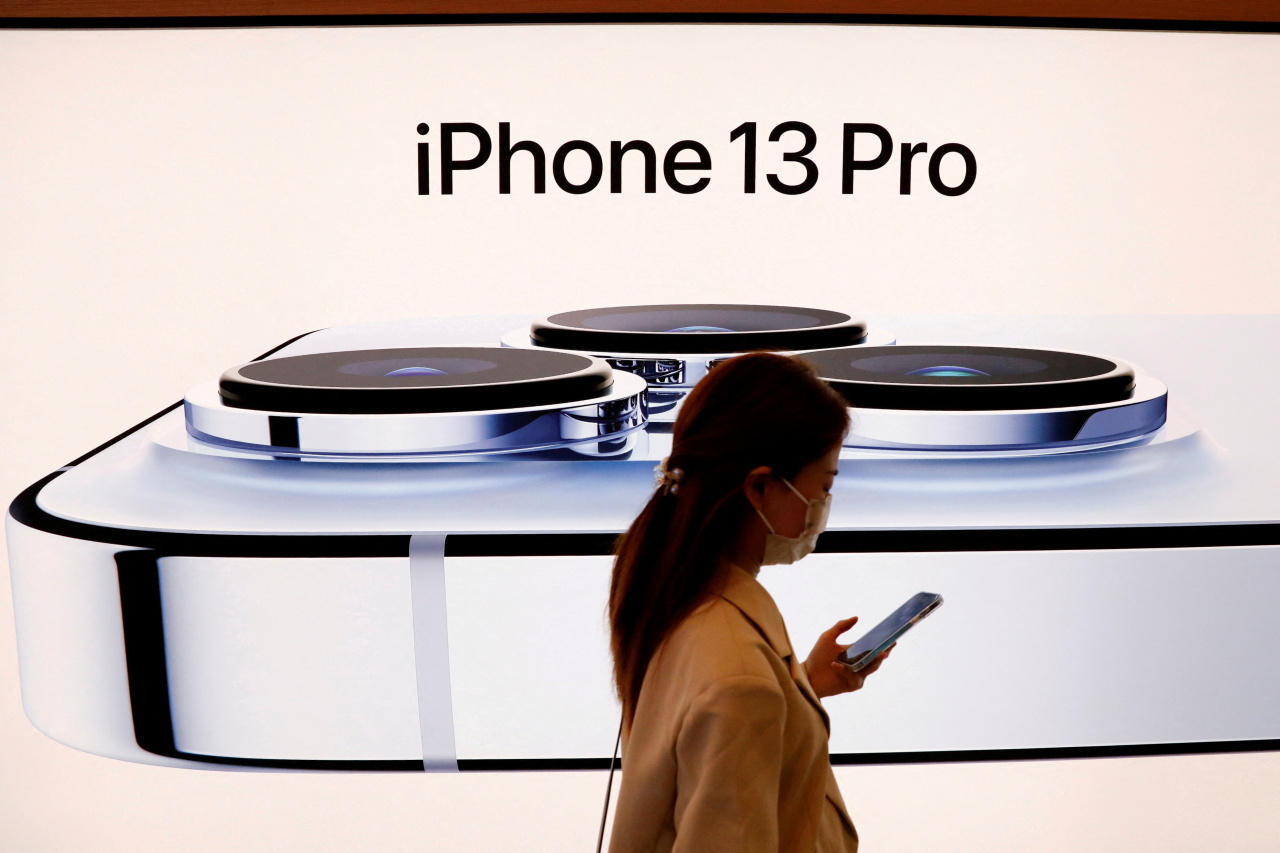 A woman wearing a face mask walks past an image of an iPhone 13 Pro at an Apple Store in Beijing on Sept. 24. (Reuters-Yonhap)
Concerns reignited among iPhone 13 users subscribed to telecoms service provider LG Uplus on Thursday as they were still unable to receive calls or had calls disconnected despite the latest but a belated software update.

Angry customers blamed Apple on online communities for posting a notice about its latest software update -- the iOS 15.2 -- more than a month after they demanded fixing the problem. Both the manufacturer and the mobile carrier have also been silent over the defects for over a month, they said.

When the problems rose to the surface at the beginning of last month, Apple did not mention anything about the issue right away. On Nov. 18, the tech giant introduced an iOS 15.1.1 update, saying that the upgraded software was to fix the problem of dropped calls on iPhone 12s and 13s.

As more users reported their malfunctioning iPhone 13s, Apple eventually admitted that there was a problem with the product.

“We are looking into the issue that is affecting a small number of LG Uplus users,” said an Apple spokesperson on Dec. 8, implying that the problem was limited to LG Uplus users.

As the majority of the issue reports were filed to LG Uplus, the company started lending iPhone 12s to iPhone 13 users while the problem was being addressed.

But both seemed to be avoiding accountability over the problem, which ranged from missing incoming calls, dropped calls and not being able to receive text messages, the customers claimed. Apple Korea could not be reached for comment.

A recent survey conducted in an online chat room named “Victims of iPhone 13 call reception failure” showed that over 30 percent of the respondents said they observed no improvement even after they installed iOS 15.2. Less than 20 percent said the troubles with their iPhone 13s had been solved after the latest software update.

“Problem fixed? It doesn’t make any sense,” one user said in the comment section of the survey.

Another LG Uplus user who claimed to have switched to mobile carrier SKT said, “Nothing has been decided as to who is responsible for the problem and it will take a long time to do that. No one will take responsibility for it, so customers are the only ones who are frustrated and taking the damage.”

Earlier this month, LG Uplus requested that Apple be subject to a joint investigation on the case after sharing the mobile carrier’s log data with the US tech giant. But there has been no announcements since on what was causing the defect.

There were SKT and KT users claiming that they experienced similar issues with their iPhone 13s, but no formal complaints were filed against the two mobile carriers.

The Ministry of Science and ICT and Korea Communications Commission have also began looking into the case to estimate the scope of the damages and figure out the issue.