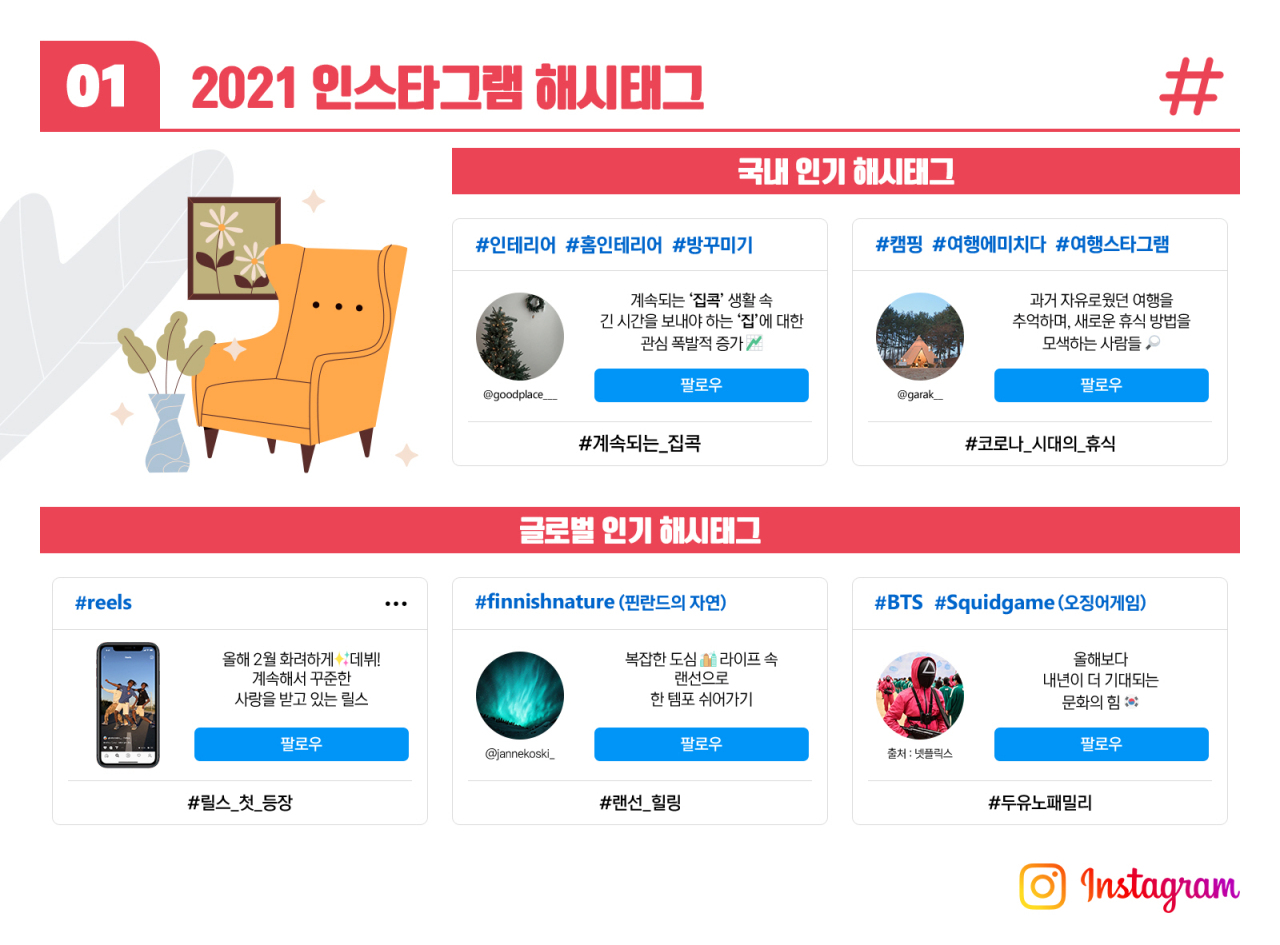 “Popular contents and accounts on Instagram in 2021 reflected the most notable social and cultural phenomena of this year, such as the dance craze, K-content syndrome, and the Tokyo Olympics,“ Meta Korea’s CEO Jung Ki-hyun said in an online press conference.

“Instagram will continue to allow the users to freely express what they like, get new inspiration through each other’s content and create new culture and trends.”

Aside from the Korean culture phenomena, home-styling such as interior tips, and camping became two of the hottest hashtags that most users found interest in, he added.

Although all seven members of BTS had just opened their official Instagram accounts last week, they were among the fastest-growing accounts, according to Instagram Korea.

K-pop girl band Blackpink, singer IU and dancer Noze were among a list of celebrities that saw their popularity spike on Instagram. Actors in Squid Game, including Jung Ho-yeon who played the role of participant number 67 in the survival competition, also garnered millions of new followers.

Instagram’s Reels, where users can edit together a collage of short video clips under a minute, was one of the most popular functions on the social media platform, officials said. According to Instagram Korea, posts under the categories of humor, animals, dance and food gained the most traction.

“Reels has attracted more love from users over time and it’s becoming a new beginning point that creates new trends,” an Instagram Korea official said in the online press conference.

Instagram said not only did the platform provide an opportunity for celebrities to connect with fans, but also allowed brands to expand their reach. According to Instagram’s survey result, about 90 percent of Instagram users in Korea were found to be following company brands. In the survey, two-thirds of the respondents said they regard Instagram as a space to communicate with different brands.

“Todayhouse” was one of the leading brands on Instagram. Their posts cover everything from home-styling trends to community-sourced tips related to home decoration. In doing so, it became one of the most popular accounts on the social media platform, Instagram Korea said.

LG Electronics, another successful brand account on Instagram, used augmented reality technology that enabled users to see how it would look like to have LG’s product in their homes.

“We plan to help large and small businesses to sail toward bigger goals through many programs such as Boost with Facebook and Instagram Academy,” Jung said.