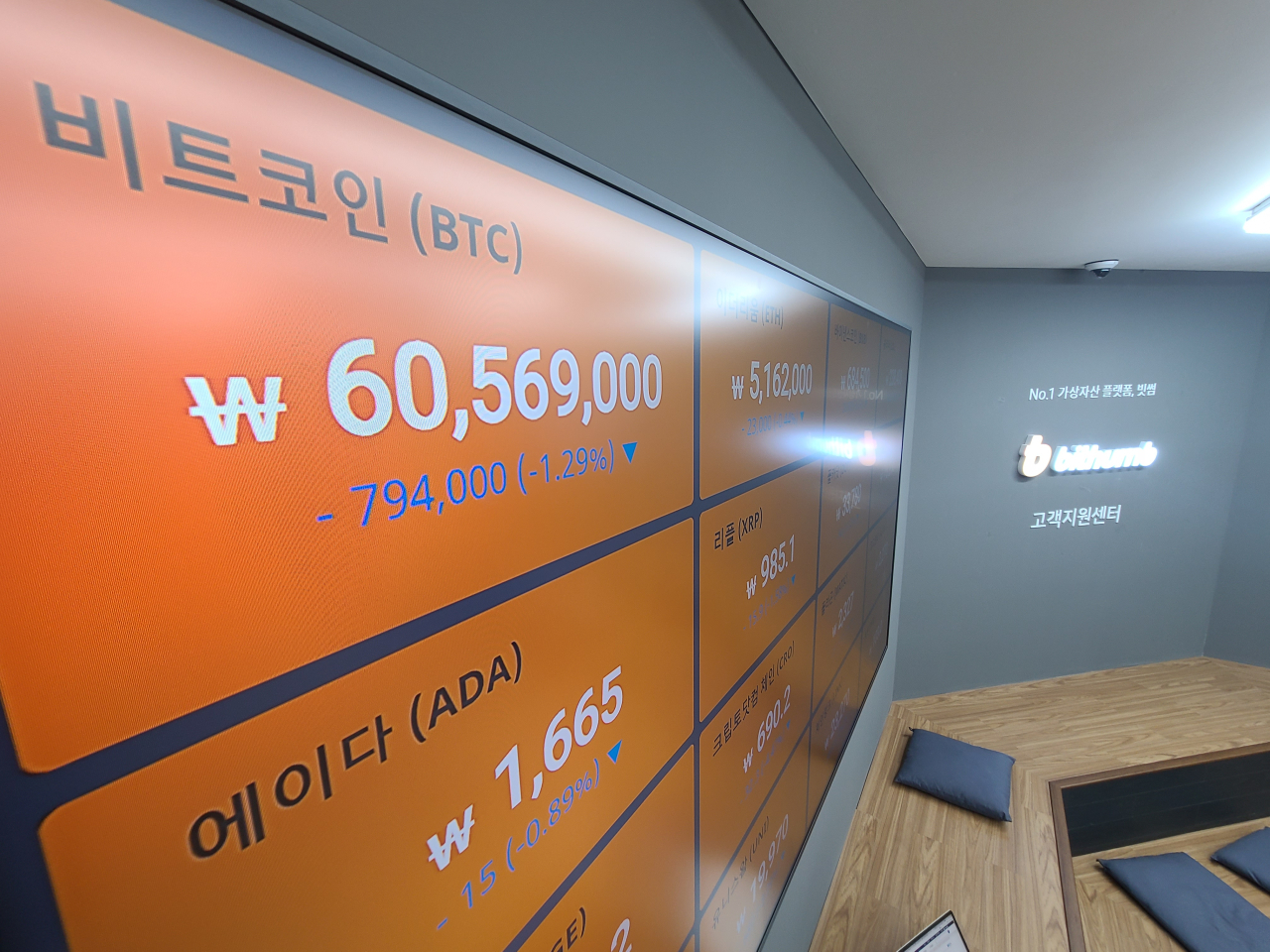 An electric board shows prices of Bitcoin on Dec. 6 at the customer service center of Bithumb, one of S. Korea's largest cryptocurrency exchanges. (Yonhap)
An increasing number of public officials are leaving to join the cryptocurrency industry almost without restriction, Rep. Roh Woong-rae of the ruling Democratic Party said Saturday, urging tighter rules on their post-public service employment.

According to data compiled by the lawmaker, a Grade 5 official at the Financial Service Commission, the nation’s top financial regulator, recently quit to move to Bithumb, one of the largest cryptocurrency exchanges here.

Although the official faces no restrictions for employment under the current regulations, the lawmaker suggested that an FSC official directly heading to the company is highly inappropriate considering the agency is in charge of regulating cryptocurrency exchanges.

For officials at the FSC and another top regulator Financial Supervisory Services, only Grade 4 or higher officials are required to undergo employment screening before joining private companies. Officials are graded according to seniority, with Grade 1 the highest.

Under the Public Service Ethics Act, government officials above Grade 4 cannot get a job that is relevant to their work for three years from the day they leave.

The lawmaker also stressed the Fair Trade Commission, the nation’s antitrust watchdog, carries out employment screening for all officials at Grade 7 or above, saying those at the top two financial regulators have an easier way out to work at private companies.

Roh also criticized the public service ethics committee that administers employment screening for not thoroughly reviewing its cases. He mentioned the case of a high-ranking FSS official who had been in charge of fintech before getting a new job at Upbit, another major cryptocurrency exchange.

The ethics committee found no problems with the move. The lawmaker said it was difficult to understand the result of the employment screening as the official dealt with issues closely related to virtual assets. According to Roh, the Ministry of Personnel Management has kept the notes from the screening session undisclosed.

The loopholes are not limited to the financial regulators. The lawmaker said a police officer, who is currently preparing to move to Upbit, used to be a leader of the team that handles crimes related to cryptocurrency at the Seoul Metropolitan Police Agency.

Although each government institution is required to follow and oversee the employment status of their retirees at Grade 4 or higher, the rule is not being enforced as public agencies tend to cover for their former staff, Roh explained.

"Recruiting former and current personnel from the FSC and the police, which are in charge of regulations, is very unethical, in that they are more likely to serve as a shield than experts," he said.

"The employment screening for the FSC and FSS should be expanded to grade 7 officials and the notes from the screening sessions should be disclosed."