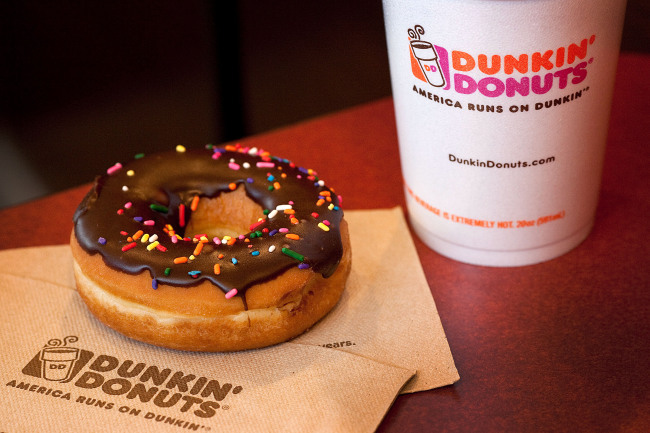 A chocolate glazed donut and a cup of coffee at a Dunkin‘ Donuts store in West Orange, New Jersey. (Bloomberg)
Police on Thursday transferred to the prosecution a man who recorded a video that created a controversy over the unsanitary conditions of a factory baking products for Dunkin’ Donuts.

The Anyang Dongan Police Station in Gyeonggi Province has been investigating the worker who took the video of the factory in Anyang for suspicions of business obstruction after BR Korea, an affiliate of the SPC Group, which operates the donut chain, filed a complaint against him.

The video stirred public uproar after the whistleblower in question sent the video clip to Rep. Kang Eun-mi of the minor Justice Party earlier this year. It was then aired by public broadcaster KBS on Sept. 29.

The footage included a scene showing that the ventilation system of the donut manufacturing facility was clogged with oil and another scene in which the oil dripped onto uncooked dough. It also showed a black substance on the inside of a bowl containing syrup.

A day after KBS broke the news, BR Korea requested police conduct an investigation, raising the possibility that the video was manipulated.

Based on footage from a surveillance camera installed in the factory, BR Korea asserted that the employee deliberately attempted to make droplets fall on the dough by hitting the fryer with oil.

“Although the basis for the judgment cannot be disclosed in detail, based on video evidence, it has been determined that there was an illegal act,” a police official said.

The Korean Confederation of Trade Union‘s Dunkin’ Donuts branch, which jointly raised the unhygienic workplace issue along with the employee, expressed regret that the police forwarded the case based on a video whose intention was not clearly understood by them.

“Its purpose was to inform the public about the contamination of food,” it said, adding that the Anti-Corruption and Civil Rights Commission, a state-run panel, recognized the employee as a whistleblower who served the public interest.