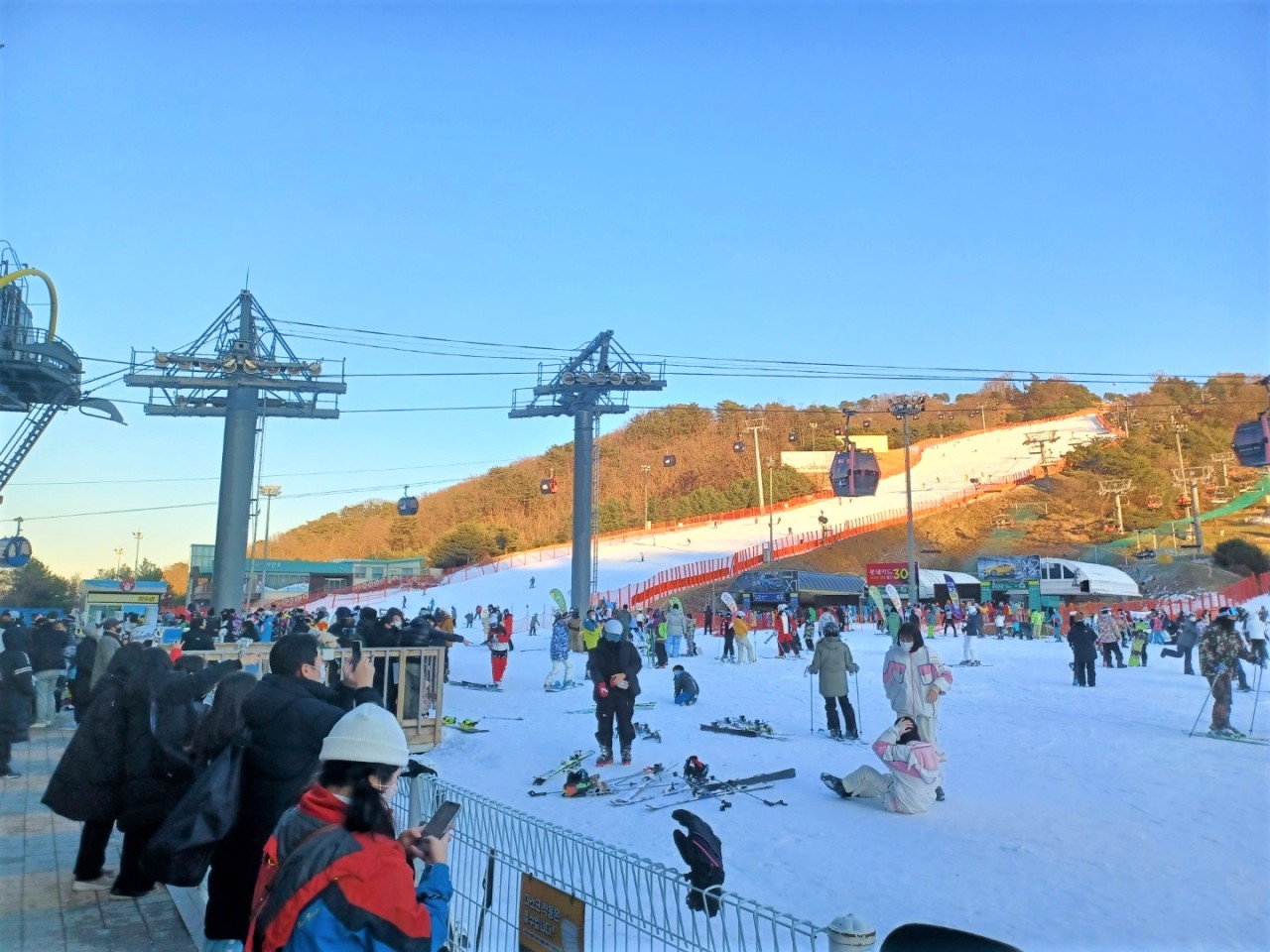 People take photographs and enjoy winter activities at Vivaldi Park in Hongcheon, Gangwon Province, Dec. 4. (Lee Si-jin/The Korea Herald)
After a winter with closed ski slopes, social distancing guidelines and mask mandates, Gangwon Province, South Korea’s winter wonderland, has started to come back to life with the arrival of a chill in the air.

Amid the ongoing COVID-19 pandemic, with concerns about the omicron variant rising each day, winter sports fans are flocking to popular ski resorts.

The Vivaldi Park resort, about 60 kilometers east of Seoul in Hongcheon, Gangwon Province, was among the many ski resorts that opened their slopes Dec. 3. 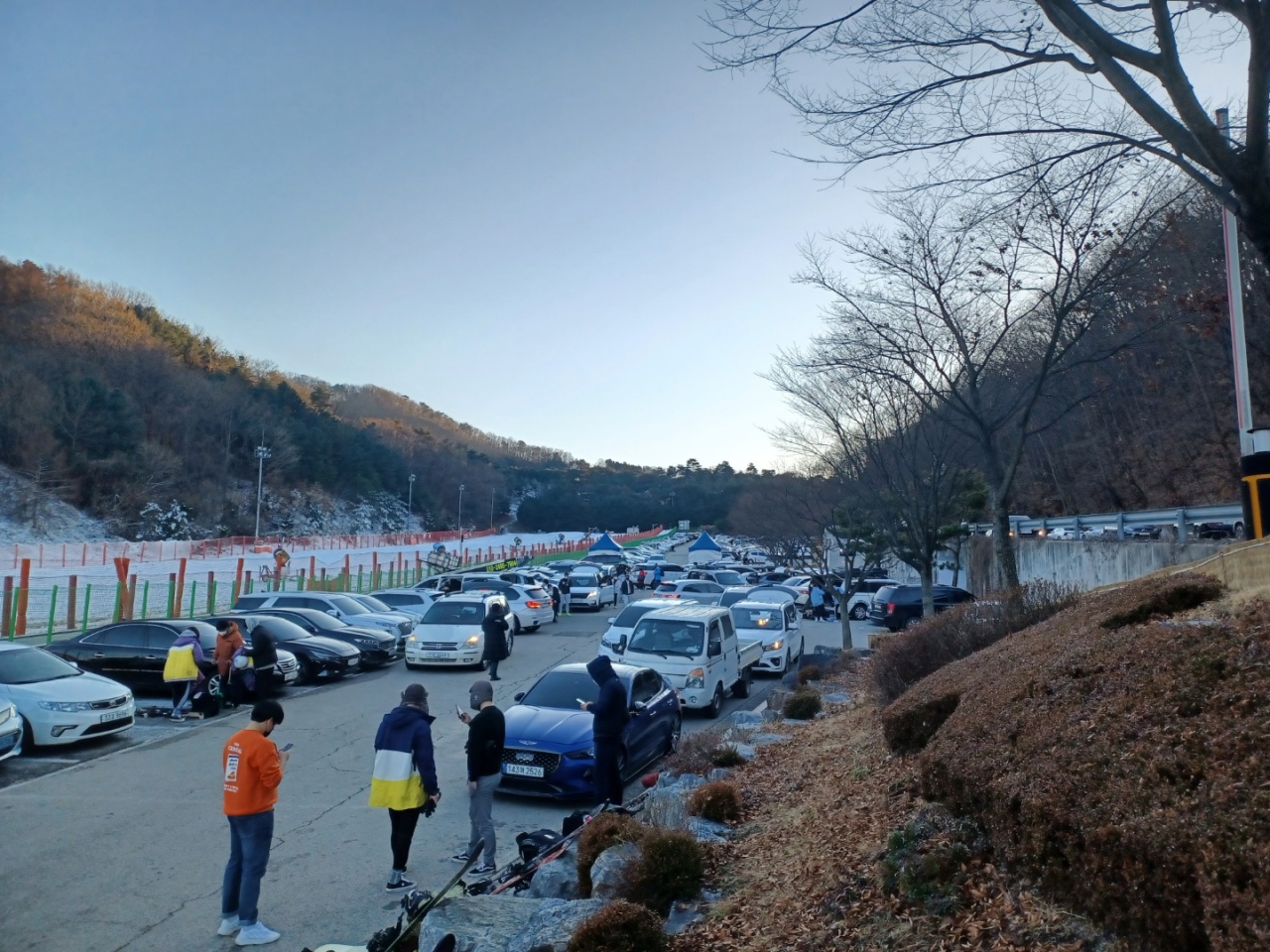 Visitors get ready to ski and snowboard after renting equipment at Vivaldi Park in Hongcheon, Gangwon Province, Dec. 4. (Lee Si-jin/The Korea Herald)
Just a day later, the resort’s parking lots were already packed and winter sports fans of all ages were gathered at the foot of the slopes -- testimony to the long-anticipated return of the ski season.

After undergoing QR code and temperature check-ins, the visitors rushed on their way, either to the rental shop or the ticket office.

Ski and snowboard enthusiasts, however, may be a little disappointed when they line up for the gondolas and find the slopes closed.

“Though the ski world has returned from a yearlong break, we still have issues with the slopes,” a Vivaldi Park official told The Korea Herald.

“With the recent rains and relatively warm weather compared to the past several years, it is difficult to manage many of the slopes. For the skiers and snowboarders’ safety, we decided to open two or three slopes and seek a gradual return to the opening of all the slopes,” the official added.

Hongcheon’s Vivaldi Park, one of the most visited ski resorts in Korea, started the season with only three of its 12 slopes open. 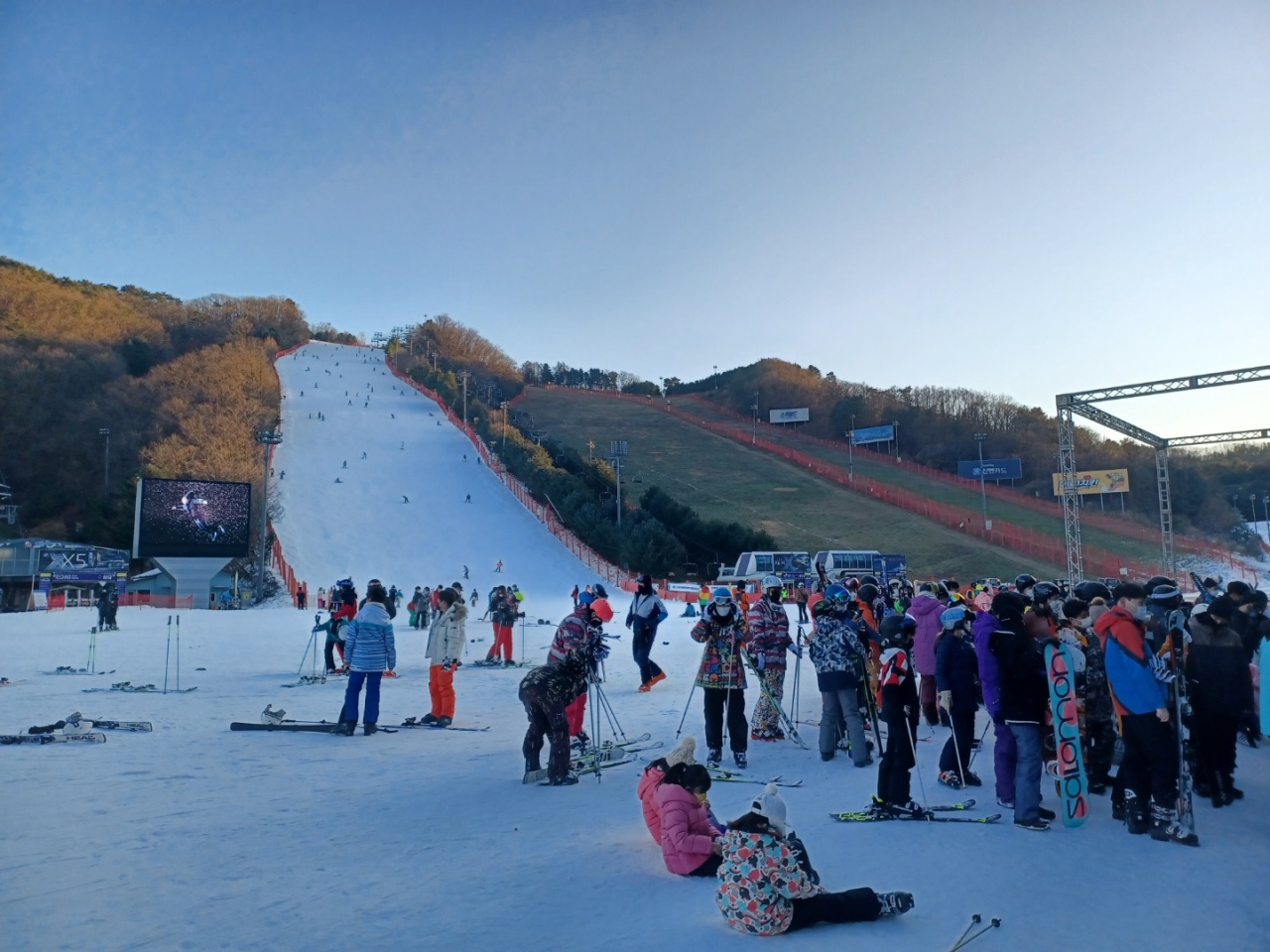 People enjoy winter activities at Vivaldi Park in Hongcheon, Gangwon Province, Dec. 4. On the right side of the photograph, some of the park’s slopes can be seen closed. (Lee Si-jin/The Korea Herald)
Things were not much different at Yongpyong Resort in Pyeongchang, Gangwon Province, which opened for the season on Nov. 26.

Despite its reputation as the biggest ski resort in Korea with 28 slopes and 14 cable lifts, Yongpyong Resort decided to offer only three beginner courses and one intermediate course where individual slopes do not exceed 700 meters.

“After hearing the news about ‘living with COVID-19,’ I was very excited to drive to Gangwon Province and hoped to enjoy the winter with the members of my snowboard club,” a cafe owner surnamed Lee based in Namyangju, Gyeonggi Province, told The Korea Herald on Dec. 2.

“We decided to wait a little bit longer for more slopes to become available. I don’t know how the situation will change with the growing presence of omicron, but I really want to go out and enjoy my favorite outdoor activity,” Lee said.

But at Vivaldi Park, winter sports enthusiasts were already in action.

Ski resorts may close their slopes again, according to a father of two in his 30s who wished to be identified by his surname, Kim. 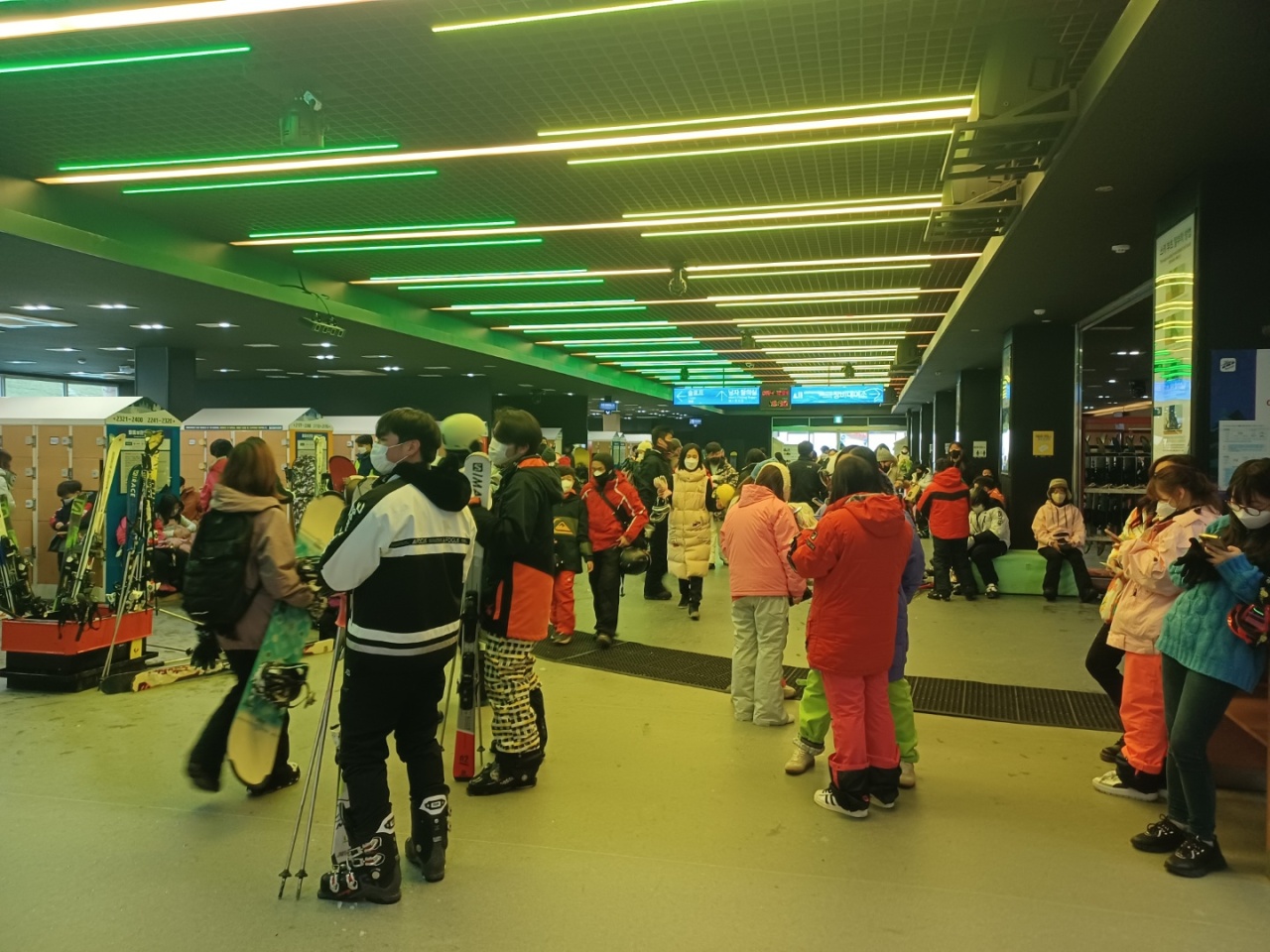 Visitors get ready to ski and snowboard after renting equipment at Vivaldi Park in Hongcheon, Gangwon Province, Dec. 4. (Lee Si-jin/The Korea Herald)
“Before that happens, I wanted to give my children a memorable winter experience. They have not been able to enjoy proper outdoor activities since the outbreak of the COVID-19 pandemic,” Kim said.

“I am a beginner skier, so the level of the slopes did not really matter to me. But I did not expect so many people to come. We must have all missed sports and leisure outside with fresh air,” a university student surnamed Kim, 26, said after returning his rented ski equipment.

Night ticket prices depend on the hours.

In addition to morning, afternoon and night tickets, Vivaldi Park offers passes for blocks of time.

More information can be found at the official websites of Yongpyong Resort and Vivaldi Park.