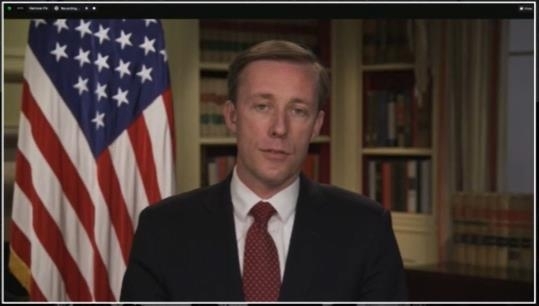 US National Security Advisor Jake Sullivan is seen speaking in a webinar hosted by an online news outlet, Defense One, in Washington on Thursday in this captured image. (Yonhap)
The United States is in a better position from a year earlier to compete with China, partly thanks to its strong alliances with countries such as South Korea, National Security Advisor Jake Sullivan said Wednesday.

The top US security advisor also underscored the importance of a US military presence in the Indo-Pacific region to help maintain peace and stability.

"I believe that there's a fairly straightforward way of looking at this, which is, close to one year into the Biden administration are we in a stronger position to deal with China than we were one year ago?, and I would argue that the answer to that question is unequivocally yes," Sullivan said in a webinar hosted by US online news outlet Defense One.

Sullivan explained reasons for the US' increased strength in dealing with China included the recently launched security arrangement with Australia and Britain, called AUKUS, as well as the Quad, which President Joe Biden elevated to a leader-level forum by hosting its first-ever summit this year, involving his counterparts from Australia, Japan and India.

"President has welcomed the president of Korea, the prime Minister of Japan to the White House, and those alliances are at their strongest point that they've been in in many years," said Sullivan.

He said the US alliances, along with its engagement with partners in multilateral formats, place the US in a position to both "compete effectively" with China and manage its relationship with China responsibly.

Sullivan also highlighted the importance of a US military presence in North East Asia.

"He (Biden) believes that stationing troops in an operational posture that is effective and adaptable in the Indo Pacific is important to keep peace and stability there, as well as to do so in the face of a rising challenge and threat from China," said Sullivan when asked how keeping US troops in the region serves US national interests.

"We feel good about where we are," said Sullivan.