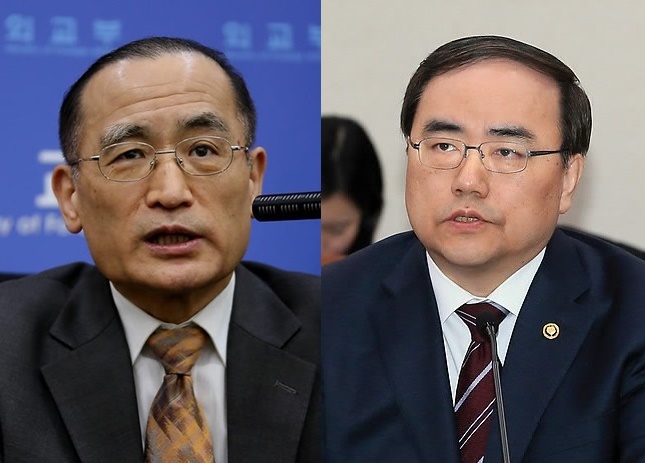 Former South Korean Ambassador Wi Sung-lak(left), who advises Lee Jae-myung of the ruling Democratic Party of Korea, and Kim Sung-han, a professor at the Korea University Graduate School of International Studies who advises Yoon Suk-youl of the main opposition People Power Party. (Yonhap)
Advisers to South Korea’s two leading presidential candidates agreed during a forum in Washington that the alliance with the US needs to be strengthened, but opinions diverged on how to denuclearize North Korea.

Wi said Lee’s vision is to use a mix of rewards, sanctions and pressure, in addition to dialogue, to deal with the North’s nuclear problem, all while working with the US and pursuing trilateral cooperation with Tokyo and Washington.

While Seoul’s negotiations with Pyongyang should be flexible, Wi said, the North’s wrongful behavior should be confronted.

Wi stressed a step-by-step approach consisting of “small deals,” echoing Lee’s proposal to conditionally ease economic sanctions against North Korea with a “snapback” provision -- meaning the sanctions could be reimposed if Pyongyang failed to keep its promises.

In contrast, professor Kim said the sanctions should remain in place until Pyongyang takes substantial denuclearization steps, echoing Yoon’s “denuclearization first” approach. In the meantime, Yoon is open to economic support and cooperation projects with the North, as well as establishing a trilateral liaison office among the two Koreas and the US, as incentives for progress on the North’s denuclearization, Kim explained.

“Candidate Yoon pursues the complete denuclearization of North Korea. But he is not taking the position of choosing between a so-called ‘big deal’ and ‘small deal,’” Kim said, joining the forum virtually from Seoul. “North Korea’s behavior over the past three years tells us it will be very hard to come up with a dramatic breakthrough in denuclearization.”

Kim also said President Moon Jae-in’s proposal to formally end the 1950-53 Korean War is premature, especially when Pyongyang is not asking for it.

At the session, Kim proposed a “two plus two” meeting of foreign and economy ministers representing South Korea and the US, to discuss economic and security issues amid the heightened rivalry between US and China.

Wi also agreed on the need to bolster the South Korea-US alliance.