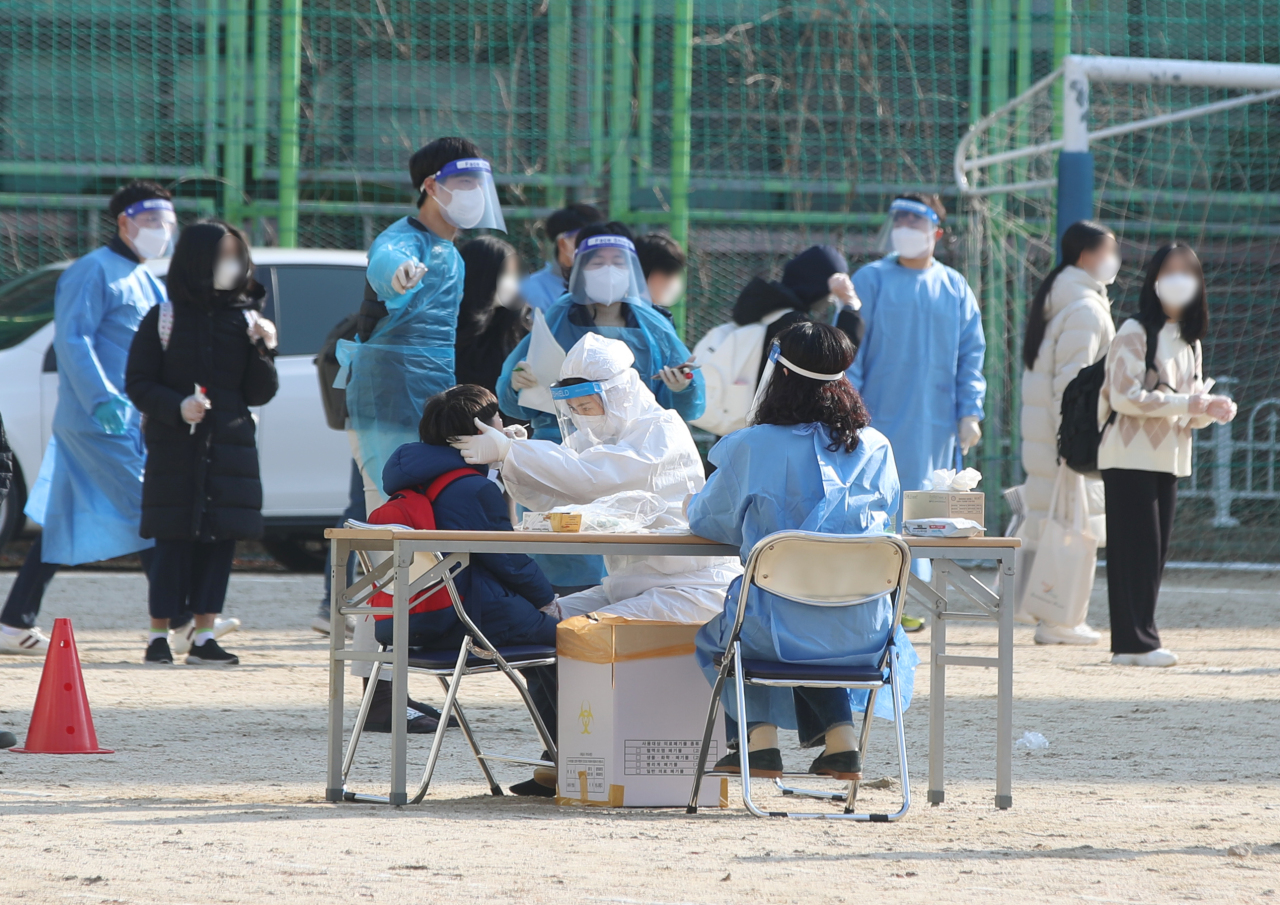 Students get tested for COVID-19 at an elementary school in Gwangju, Tuesday, after some students at the school were confirmed of COVID-19 infection. (Yonhap)
South Korean authorities are speeding up an inoculation plan for students as schools across the nation saw a significant spike in COVID-19 infections after returning to full-scale, in-person classes.

From Nov. 29 to Sunday -- the second week since schools have fully reopened -- 1,450 students in Seoul tested positive for the coronavirus, according to a report from the Seoul Metropolitan Office of Education released Tuesday. The cases marked a 33 percent increase from the 1,090 infected students last week.

Of the total infected students and officials, transmissions at schools accounted for 25 percent, marking a 5.9 percent point increase compared to the week before.

Some 36 percent were household transmissions, while 32 percent were cases with unidentified infection routes.

Elementary school students recorded the highest increase. The number of confirmed cases among elementary students last week went up to 793 from 545 from the week before, making up for 55.3 percent of the total students who tested positive in Seoul.

While the number of school-related COVID-19 cases in Seoul is on the rise, the Education Ministry is speeding up its vaccine plan for students.

The Education Ministry plans to run outreach inoculation programs at schools from Monday to Dec. 24. The program will have medical staff visit schools to administer vaccines to students.

Prior to the launch, the ministry conducted a three-day survey among parents and legal guardians of school pupils to gauge the demand for student vaccination. The authorities will set up specific guidelines for the program based on the survey results.

Education Minister Yoo Eun-hae held a video conference Monday with education superintendents across the country, asking for their cooperation and support to encourage vaccination among teenagers.

“Among the 2,990 children and teenagers who tested positive for COVID-19 in the recent two weeks, 99 percent have not been fully vaccinated,” Yoo said. “We need to focus on those aged from 12 to 15, who show a relatively low rate of vaccination which currently stands at 14.8 percent.”

“We are encouraging inoculation in regards to the seriousness of the COVID-19 situation, though it eventually is up to one’s own decision,” Cho said at a press briefing held Tuesday.

Meanwhile, complaints against a government plan to expand the “vaccine pass” system to students aged 12 to 18 from February have continued to mount.

Some 60 organizations will hold protests in front of the Korea Disease Control and Prevention Agency in Cheongju, North Chungcheong Province, and the Education Ministry in Sejong on Thursday, requesting authorities to take back its plan.

The digitized vaccine certification system will be expanded to those aged 12 to 18 from Feb. 1. Youths in that age group will be allowed into private cram schools, study rooms and other venues only if they are fully vaccinated, or would have to show a recent negative COVID-19 test result for entry.

Those aged 12 to 18 would have to get their first shots before late-December in order to complete the Pfizer vaccination regimen before Feb. 1.