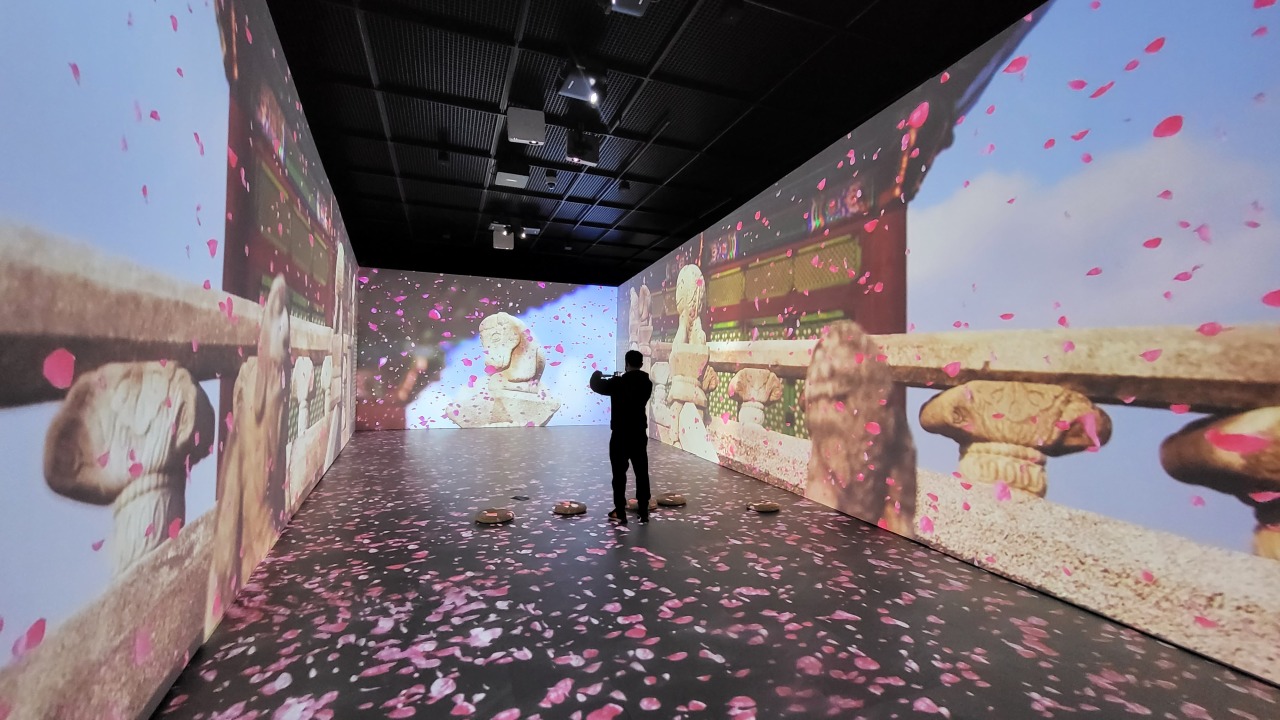 The exhibition that aims to look back on the history of the Joseon era’s primary palace is grouped under the theme of the four seasons. Each theme features one of the four buildings of the palace complex: Heungbokjeon Hall, the Sojubang kitchen site, the bedchamber area and Geunjeongjeon Hall.

The first section, “Even if the wind blows the door shut,” presents a media art display that looks out a window from Heungbokjeon Hall in winter, to notice the garden occupied by the Japanese governor general of Korea. “Bonghwangsu,” a poem by Cho Chi-hun that depicts the ruins of Gyeongbokgung, can be read at the entrance, while the ambient music conveys a sense of hopelessness in desperate times.

“Buried memories” pairs the efforts of the survey excavation team to fall, the season of colorful changes. Ceramic shards, excavation journal entries and artifact catalog cards of items recovered on the palace grounds are presented. In a documentary video, three experts who worked on the excavation tell behind-the-scenes stories. Roof tiles and metal implements uncovered from the Sojubang kitchen site are also on display. 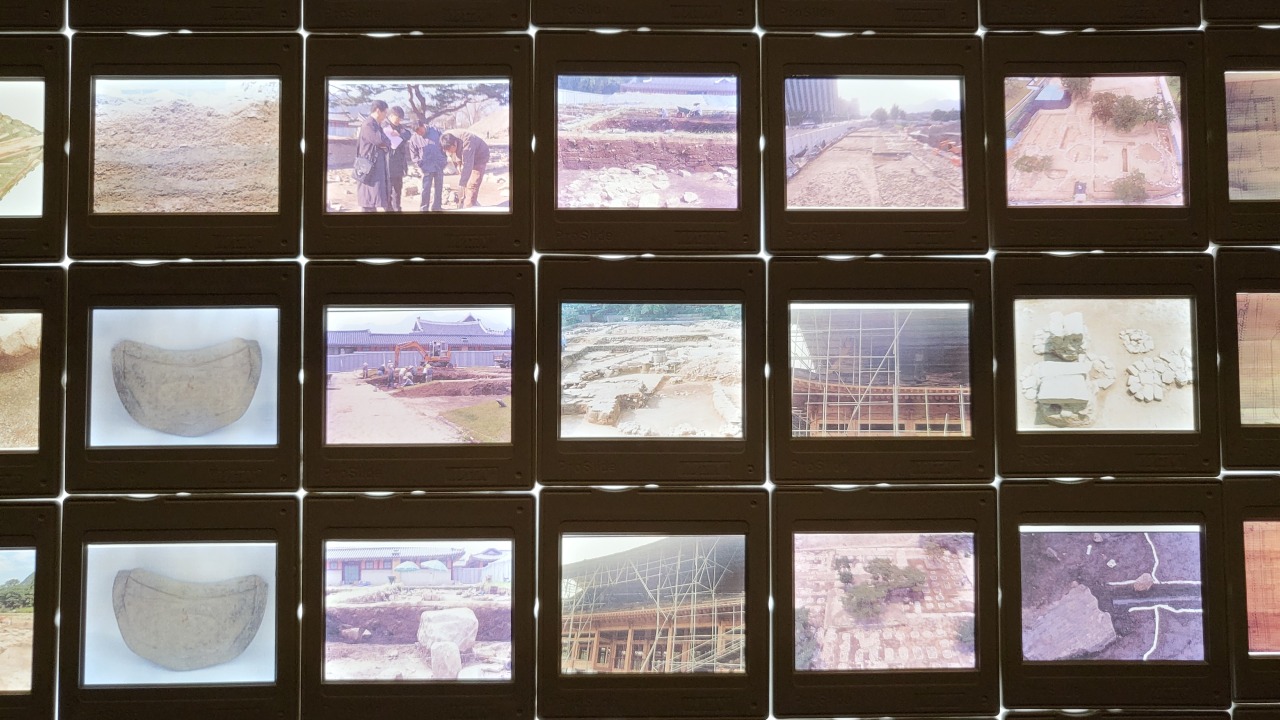 Photos show the restoration site of Gyeogbokgung. (Kim Hae-yeon/The Korea Herald)
“A meritorious deed achieved after 500 years” is designed to make visitors feel as if they are strolling around the palace on a summer night. The section presents a 4-by-15-meter media wall, which depicts drawings for the restoration of the palace using line-drawing techniques in digital graphics. Architectural measurement drawings based on a comprehensive analysis of ancient maps and historical documents are explained in detail to help visitors better understand the restoration process.

The last section, “Spring after the ice melts,” presents a three-channel video that imagines spring 2045 at Gyeongbokgung after the restoration has been fully completed. The ground plan has been reinterpreted as a digital archive featuring the names of the people who took part in the decadeslong restoration. Tools used in the restoration of Geunjeongjeon Hall and Hyangwonjeong Pavilion are also showcased. 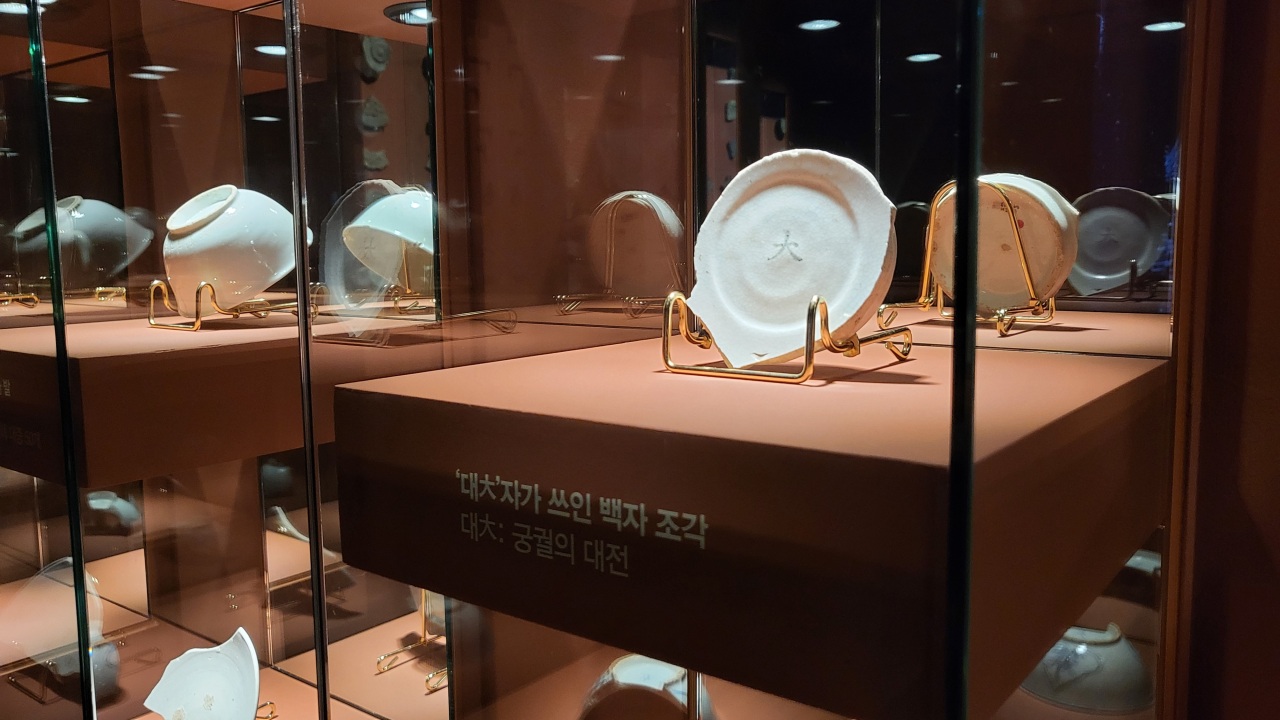 Porcelain excavated at the palace is on display. (Kim Hae-yeon/The Korea Herald)
Titles of the four sections have been inspired by Si Mok’s poem ”Gogungdanyeong,” printed in Donggwang magazine in 1927. The poem depicts the sorrowful mood of Gyeongbokgung after it was damaged during Japan’s colonial occupation.