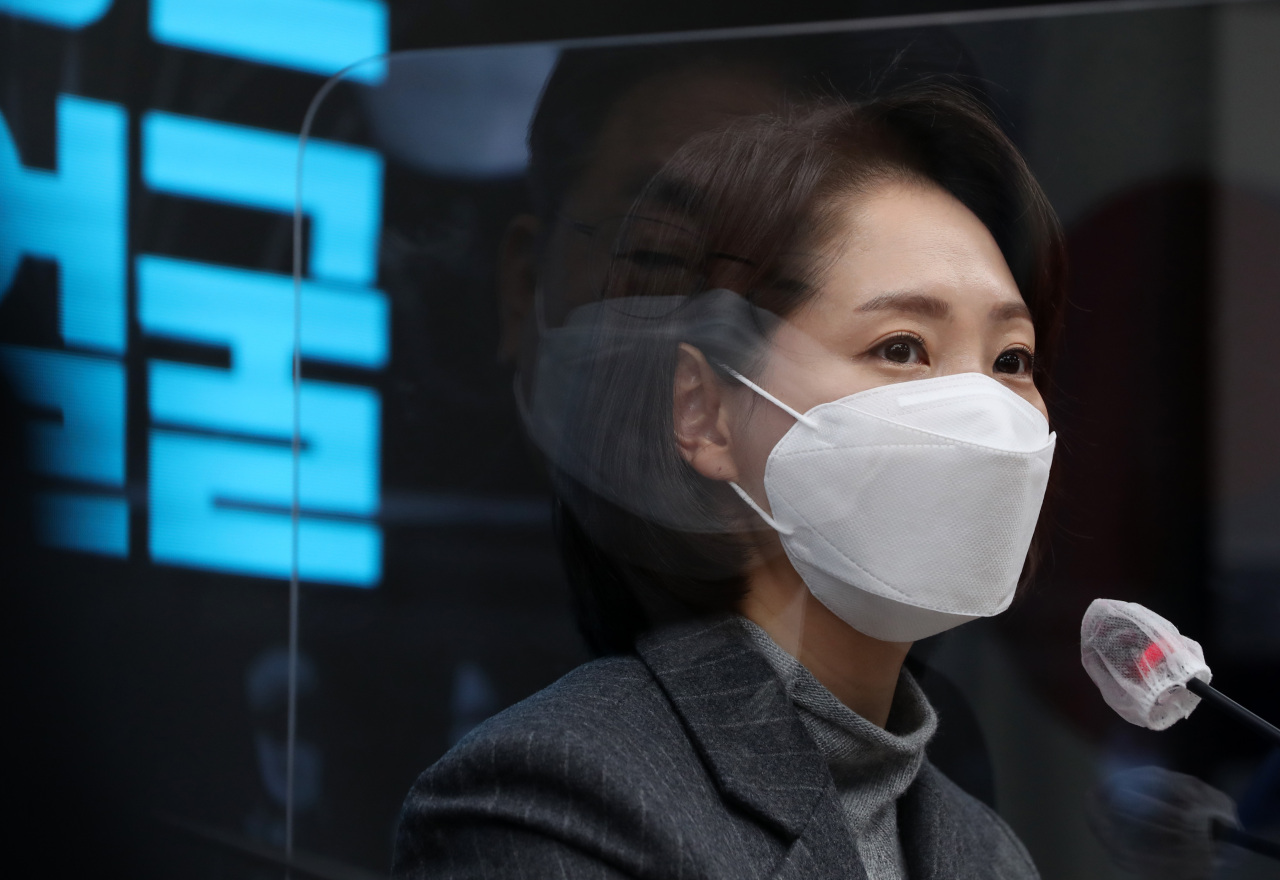 Cho Dong-youn, former co-chair of the election committee for the ruling Democratic Party of Korea’s presidential nominee Lee Jae-myung. / Yonhap
Dispute surrounding Cho Dong-youn, a former member of the ruling party’s presidential campaign, recently took a new turn when she claimed that her child born out of wedlock had been conceived by sexual assault.

Legal representatives for Cho, who recently resigned from her post as a co-chair of the election committee for the liberal Democratic Party of Korea’s presidential nominee Lee Jae-myung, said late Monday that his client had evidence to prove this, following Cho’s statement a day earlier that it was “an unwanted pregnancy by a third party.”

The revelation stirred reactions from around the country, ranging from apologetic to cynical. Social critic Yoon Chang-seon, who decried Cho’s actions as unethical, issued an apology, saying “no one would make up a story like that.”

Culture critic Chin Jung-kwon, on the other hand, shared the news article of Cho’s claims on his Facebook page and said “Even if this was true, she should not have said this.” He deleted the post within an hour, saying that it wasn’t something that he could judge.

Kang Yong-seok, the former right-wing politician, lawyer and YouTuber who made the revelation on Cho’s extramarital child, expressed doubt over her story and said he will “devote the rest of his life” to finding out who that supposed rapist is.

On Monday, the far-right YouTube channel Hover Lab, co-founded by Kang, went further to claim that Cho attempted to hide her pregnancy -- out of wedlock -- by demanding sexual intercourse with her then-husband while pregnant. The channel also said it would file a lawsuit against her supposed attacker with the Seoul Central District Prosecutors Office on Tuesday. He called Cho evil for her attempts to hide the truth behind the pregnancy.

Regardless of her reasons for hiding her son’s true parentage, some basic facts are clear: The Cho became pregnant in August 2010. During a legal dispute over the parentage of their son, DNA testing showed that the boy’s father was not her then-husband. They got divorced afterwards.

A more pressing question, however, is why such private matters needed to be dragged out in the public in the first place.

Lawyer Yang Tae-jung, who represents Cho, likened the actions of Hover Lab to the Arrowhead, a fictional group that appears in the hit Nexflix series “Hellbound.” In the show, the group follows the teachings of a cult group New Truth Society, digging into the past of people who have received a decree for death in a self-imposed mission to reveal their sins.

The Arrowhead character from the Netflix series "Hellbound" (Netflix)
The primary storyline of the show’s first part revolves around Park Jeong-ja -- played by Kim Shin-rok-- a single mother who is subject to a public demonstration of condemnation, during which the “sinner” is brutally beaten and dragged to hell by three hulking supernatural beings.

Although Park’s lawyers insist that information about her and her children be hidden, an Arrowhead member on YouTube discloses her name, photo, and the fact that her son and daughter have different fathers. Suddenly, she is labelled an adulterer and is subject to a nationwide criticism.

The show never confirms what Park’s sin is, or if she is really a sinner worthy of hell. This is not important to the Arrowhead members, who are convinced that she is an adulterer and are hell-bent on making her pay.

As in Cho’s case, the initial focus of Park’s lawyers is to ensure that privacy of Park’s family is not invaded. And like in the show, this failed for Cho’s family.

Yang said that Kang and the Hover Lab made it impossible for Cho’s son to live a normal life by revealing his name, date of birth and even the photo. Kang hit back by saying that he hid part of the boy’s face in the photo and “no one but his mom would know it is him” since it was taken 8 years ago and “kids all look similar.”

In “Hellbound,” the Arrowhead believes they are carrying out God’s words for the good of mankind, by condemning murder, kidnapping, defamation and general violations of basic human rights.

For Kang and the Hover Lab, their motivation seems unclear. To some, it is a politically charged action to discredit a prominent liberal figure. The channel has a track record of similar cases. Others may say it was to stop an “unqualified” person from taking an important role in the liberal campaign.

Some citizens, however, doubt that what happens within someone’s household needs to be discussed at all when their supposed offence is not a crime. Yoo Seung-min, a 35-year-old who says he “doesn’t care what those damned leftists do,” said he was utterly disinterested in Kang’s quest for self-proclaimed justice.

“For public figures, I think it should be more about assessment of one’s capabilities rather than personal life. I really couldn’t care less about them (liberals), but whether she had an affair or whatever, it’s more about being able to get the job done,” he said.

A mother of two in her 30s, who wish to identified as her surname Lee, raised concerns about Cho’s children.

“When it comes to children, mothers tend to be extra sensitive. I personally wouldn’t want someone to dig into it, if my children could be hurt by my private life,” she said.

“Whether it was an affair or sexual assault, she must’ve been hiding it from her son. Now he will be hurt and teased (by others), and she (Cho) would’ve wanted to avoid that. In that sense, maybe it’s better to separate politics and personal life since it really is a separate issue.”