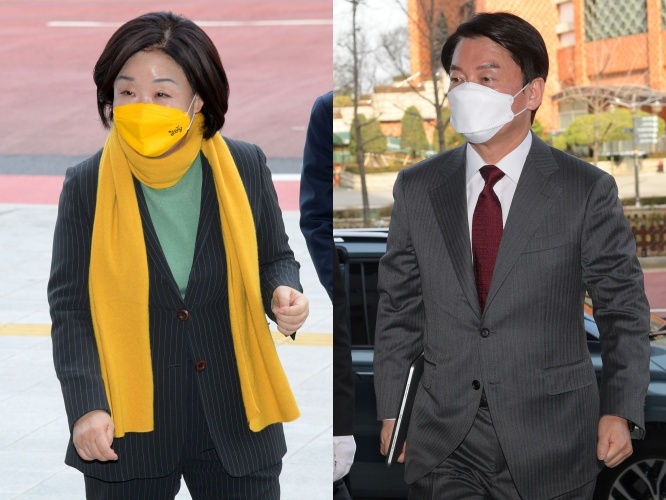 Rep. Sim Sang-jung from the Justice Party (left) and presidential candidate Ahn Cheol-soo show up at a hotel on Yeouido, Seoul on Monday to meet each other. (Yonhap)

Presidential candidate Ahn Cheol-soo from the People’s Party met with Rep. Sim Sang-jung from the Justice Party on Monday to discuss how to improve nation’s election system and agreed to push for special prosecution against two key candidates from the ruling and main opposition parties.

“We shared that the two party system has caused difficulties in people’s lives. We will cooperate on what we can do to restore the politics for the future, for the people,” Sim said.

“The two candidates suggest the introduction of run-off voting system, while working on improving the election system to allow a multi-party system,” Kwon said.

When asked was there any discussions of unification, Ahn answered, “There wasn’t any.”

According to the two floor leaders, the two candidates call for the government to make room for 10,000 COVID-19 patients and 2,000 extra intensive care beds for critically ill COVID-19 patients, and to compensate small business owners who have been hit by the virus pandemic. The candidates also agreed to compete for the better good, discussing future-oriented agendas such as pension reforms, managing climate crisis and more.

“(Sim and Ahn) are worried about the recent press and media coverage being heavily focused on the candidates from the two major parties. We ask for equal opportunities so that they could voice out the diverse needs of the people,” Bae said.

The two candidates also agreed that special prosecutor probes into Seongnam development scandal allegedly related to Lee and also the allegations surrounding Yoon should be run.