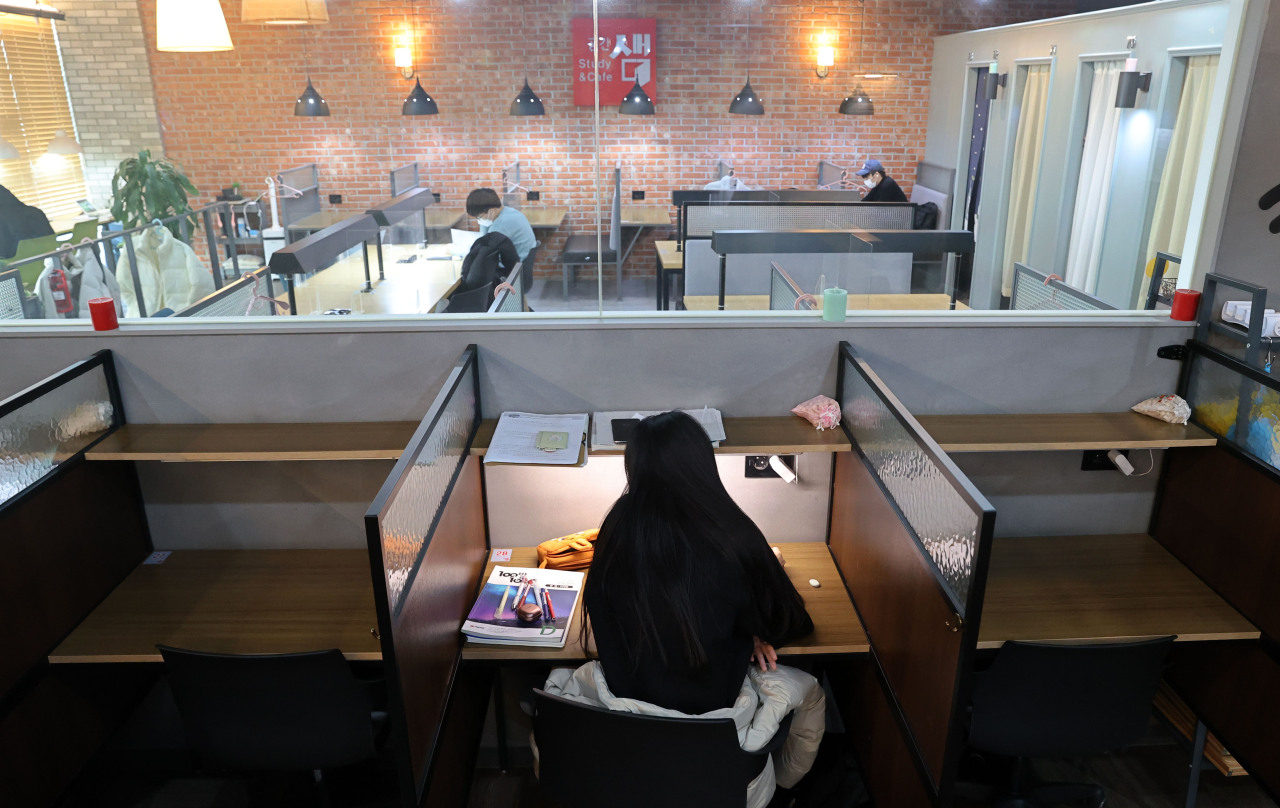 Students work at a study cafe in Suwon, Gyeonggi Province, Sunday. (Yonhap)
Despite some hiccups, the Korean government will go forward with its plan to implement a “vaccine pass” system for school pupils aged 12 to 18 from February.

The Korea Disease Control and Prevention Agency said teenagers born between 2003 and 2009 will be allowed to go to private cram schools, cinemas and cyber cafes only if they are fully vaccinated from February.

Alternatively, those who have not been fully vaccinated will have to show a recent negative COVID-19 test result for entry.

“We are not considering postponing the plan,” Jung Jong-chul, the vice minister of education, said at a press briefing Monday at the governmental complex in Sejong.

“The government initially allowed teenagers to get vaccinated as they chose. But the fifth wave of COVID-19 and the omicron variant have changed the situation,” Jung said. “We will have to persuade students and their parents on being vaccinated.”

Authorities said teenagers who get their first shots now will be able to complete the vaccination routine before Feb. 1. Pfizer takes a total of five weeks from the first inoculation to be fully administered.

“The public necessity to protect people from the dangers of COVID-19 infection is much graver than anything else,” Son Young-rae, a senior Health Ministry official, said Monday at a press briefing.

“The vaccine pass system will allow those who have been fully vaccinated to gather and prevent contagion among young people, helping to protect them from the dangers of the virus,” Son said.

While some have voiced concerns that the government’s suggested timeline for the vaccination of students is rather tight because they would have to be vaccinated right after the end-of-term exams in mid-December, Son replied there is enough time.

“Teenagers will have about three weeks to get the first shot. Time won’t be an issue,” Son said.

Not everybody, however, has welcomed the new measure.

An online petition uploaded to the Blue House website on Nov. 26 calling for the government to not to implement the vaccine pass system has been supported by some 240,000 people as of Monday.

“Scared of the side effects, I haven’t even received the first dose of vaccine,” the post updated by a person who identified as a high school student based in Daegu read. “I don’t understand why (the government) is so obsessed with the expansion of the vaccine pass system.”

“This measure is different from the previous ones as it neglects the cram schools’ efforts to control infectious disease and puts the blame of infection and the responsibility to encourage vaccination on cram schools,” Lee Yu-won, the head of the Korea Association of Hakwon, said through a press release issued Friday.

“It is impossible for students to go through PCR tests multiple times to go to cram schools or study rooms,” Lee said. “Cram schools are different from other multiuse facilities as they can keep tight track of visitors.”