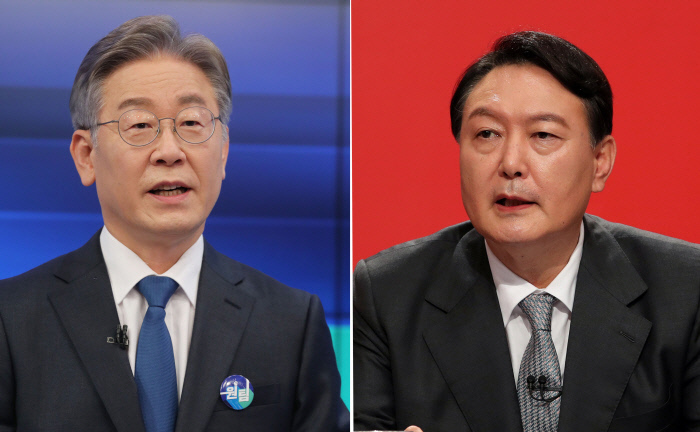 The leading contenders are Lee Jae-myung of the liberal ruling Democratic Party of Korea and Yoon Suk-yeol of the conservative opposition People Power Party. While domestic issues such as runaway housing prices and continuing economic fallout from the pandemic are expected to be on the forefront of voters’ minds, the result will also have tremendous impact on Seoul’s foreign policy, especially as it treads carefully amid the intensifying rivalry between its security ally Washington and key trade partner Beijing.

Seoul’s new leadership will also have wider ramifications for the Joe Biden administration, as it views its East Asian ally as a key partner to Washington’s battle in containing an increasingly assertive Beijing in the region, as well as dealing with nuclear-armed Pyongyang.

Both Lee and Yoon highlight “national interest” as the foundation of their foreign policy, but what that entails and how to build that is where their differences lie. Lee, who is widely expected to continue incumbent President Moon Jae-in’s diplomacy, says he will take a “pragmatic and balanced” approach, alluding he will refrain from openly taking sides between Washington and Beijing. Meanwhile, Yoon places bolstering the South Korea-US alliance as key, as well as forging stronger ties with like-minded democracies in resolving issues on the Korean Peninsula and around the world.

“The US would traditionally prefer a conservative president from South Korea. But when it comes to Seoul’s US policy, personal characteristics and background have also shaped their policy, in addition to the party’s ideology,” said Park Ihn-hwi, a professor of international politics at Ewha Womans University. “Also there’s the North Korean factor. Depending on the candidate’s stance on Pyongyang, the allies could either clash or work well together.”

For decades, South Korea’s conservatives have generally placed a greater emphasis on the US alliance, to the extent that it has irked China in the past, including with the 2017 deployment of the US-made Terminal High Altitude Area Defense anti-missile system in South Korea, despite backlash from China. Meanwhile, the progressives tend to emphasize nationalism and diplomatic autonomy, and have opted for “strategic ambiguity” between the US and China.

Observers, however, note that both candidates are not all black and white when it comes to dealing with the US. Despite the ideological split of their respective parties, the two have also taken into consideration the complexity of the geopolitical environment and changing dynamics of voters, and have left doors open for diplomatic leeway, holding themselves at a distance from their parties’ polarized stance.

“The two candidates are well aware of the security environment Seoul faces, and despite the differences in the liberal and conservative party, they both recognize the US-South Korea alliance as given,” said Seo Jung-kun, a professor of political science at Kyung Hee University.

For example, Lee has set up a “practical diplomacy committee” and recruited experts like Wi Sung-lac, a former ambassador to Russia who has in the past voiced criticism against the Moon administration’s foreign policy, for a more balanced stance.

“Lee has been reaffirming the importance of the US-South Korea alliance and expressed a stronger position against North Korea than the incumbent Moon administration,” said Seo. “Meanwhile, Yoon stresses the importance of a ‘US-South Korea alliance’ -- which is critical to the conservative voters who don’t want a reevaluation of the alliance -- but has shown a newer conservative side, such as expressing that he is willing to be more open in dealing with the North’s denuclearization issue.”

Observers say the two candidates, who are both relatively inexperienced in foreign affairs, have only touched on the basics at this point and not gotten into much detail concerning their US policy. But the remarks on US policy by the candidates and their advisers could provide a glimpse into the thinking of the presidential hopefuls.

Ex-Prosecutor General Yoon has stressed on forging a stronger alliance with the US, hinting that he would align more closely with the US and get tougher on China.

“I cannot overemphasize the importance of a comprehensive South Korea-US alliance covering all areas, not only the security, but also health, administration, climate change and cutting-edge technology,” Yoon said last month during his meeting with visiting US Sen. Jon Ossoff and Daniel Kritenbrink, the US assistant secretary of state for East Asian and Pacific affairs. “A firm alliance between South Korea and the US has become ever more important in global issues beyond national security.”

Yoon, who stressed global coalitions of democratic states, dangled the possibility of joining the US-led Quadrilateral Security Dialogue that involves like-minded regional democracies -- Japan, Australia and India -- which is widely viewed as a mechanism to contain China.

He also stressed the need to cooperate with the Five Eyes alliance -- the intelligence-sharing club among the US, UK, Canada, Australia and New Zealand -- in order to protect security interests against North Korea’s nuclear threats, but has stopped short of backing Seoul’s possible full membership to the group.

The remarks will largely be welcomed by Washington, but could potentially rattle Beijing again. In 2017, Seoul’s decision to deploy the US-missile system angered China, which views THAAD as a threat to its national security, and it hit back at Seoul with economic retaliation.

But an official with the Yoon camp stressed that advocating the US alliance doesn’t mean that it will not value its ties with China.

“The Moon administration has taken a strategic ambiguity position in US-China rivalry, and we are not entirely breaking away from that,” said a foreign affairs adviser with Yoon’s camp who wished to remain anonymous. “We are focusing on strengthening the alliance (with the US) and upgrading to the next level, while at the same time managing ties with China.”

Lee’s campaign put emphasis on the importance of its alliance with the US, but stressed that there is no need for Seoul to constrain its diplomatic maneuverability by siding with one superpower over another.

This largely echoes the Moon administration’s stance, which has maintained “strategic ambiguity” in juggling its security partnership with Washington and trade reliance upon Beijing.

“Amid the intensified rivalry between the US and China, there have been many situations where South Korea is pressured to choose,” Lee said during a press conference with foreign media last month. “Our diplomatic principle is based on pragmatic diplomacy centering on national interest. We shouldn’t be swayed, but establish a situation where we can make a choice.”

“We cannot ignore the security alliance with Washington, and have to deepen our ties,” he said, describing the US as “Korea’s only ally” and China as a “strategic partner.” “But at the same time, we cannot neglect our ties with China, which is geographically very close and the exchange is expanding.”

During another event last month, Lee said that “there aren’t only two options for Seoul to choose,” when asked what Seoul will do if it has to pick a side between the rivals.

On the possible concern that “strategic ambiguity” could weaken the US-South Korea alliance, the Lee camp assured that the decades-old alliance is the basis of Seoul’s foreign policy.

At a forum held last week, Lee’s adviser Wi said Seoul’s role is to be “close to the US and not too far from China.”

“The US is our ally and China is our partner, and we can say we have a closer relationship with the ally,” he said. “If we are aiming to do diplomacy based on the value of a democratic, market economy, we have to set the direction closer to the US.”

In regard to the controversial THAAD issue, Lee in the past had called to remove the missile-defense battery from South Korea, but his recent intentions over the matter have not been as clear.

“In principle, I cannot agree that the (THAAD deployment) is fully in accord with the country’s national interest in East Asia, but am aware that one cannot simply get rid of it as it has already been deployed,” he said last month, adding if Seoul were to additionally install another battery, there would need to be a full review before making the decision.