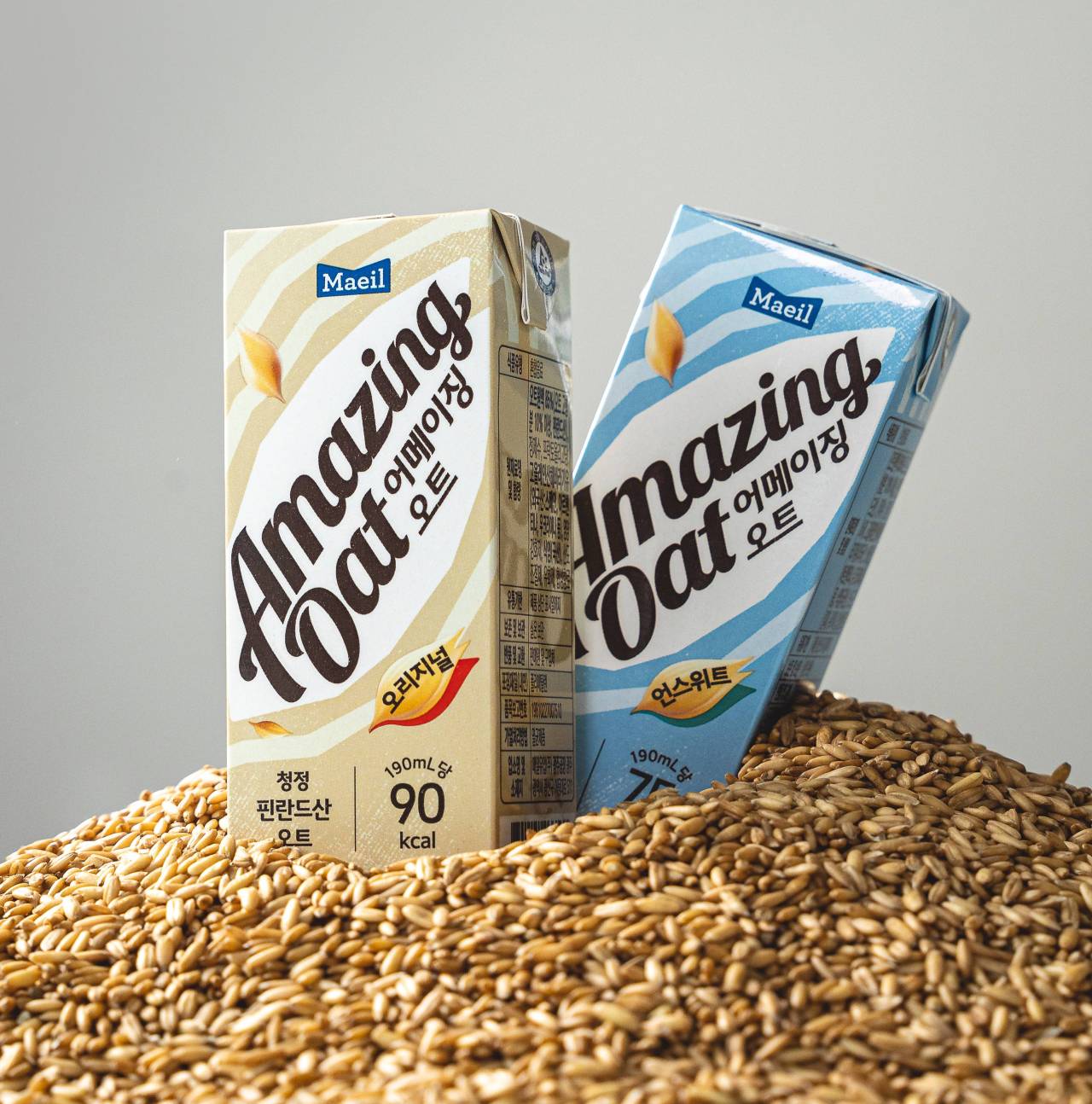 Amazing Oat from Maeil Dairies. (Maeil Dairies)
Coffee chains, food companies and the milk industry are seeing oat milk as a new alternative to dairy, as the industry tries to appeal to a growing number of health-conscious consumers and the budding vegan trend in South Korea.

While oat milk is considered a common alternative to typical dairy milk in countries like the United States and Europe, the drink is relatively new here in Korea.

In a country where some 75 percent of the population are lactose intolerant, milk producers both small and large are coming up with their own versions of the plant-based dairy alternative.

More than 310,000 packs of oat milk from Maeil were sold over the first three months after its launch on the Kakao Makers online marketplace.

“Compared to other plant-based milk, oat milk is the most similar in flavor to dairy milk. For customers, it’s a good dairy alternative to eat with cereal and coffee,” explained an official from Maeil Dairies.

Smaller companies have joined in as well. Independent brands like Anothers launched its own oat milk for vegan consumers. 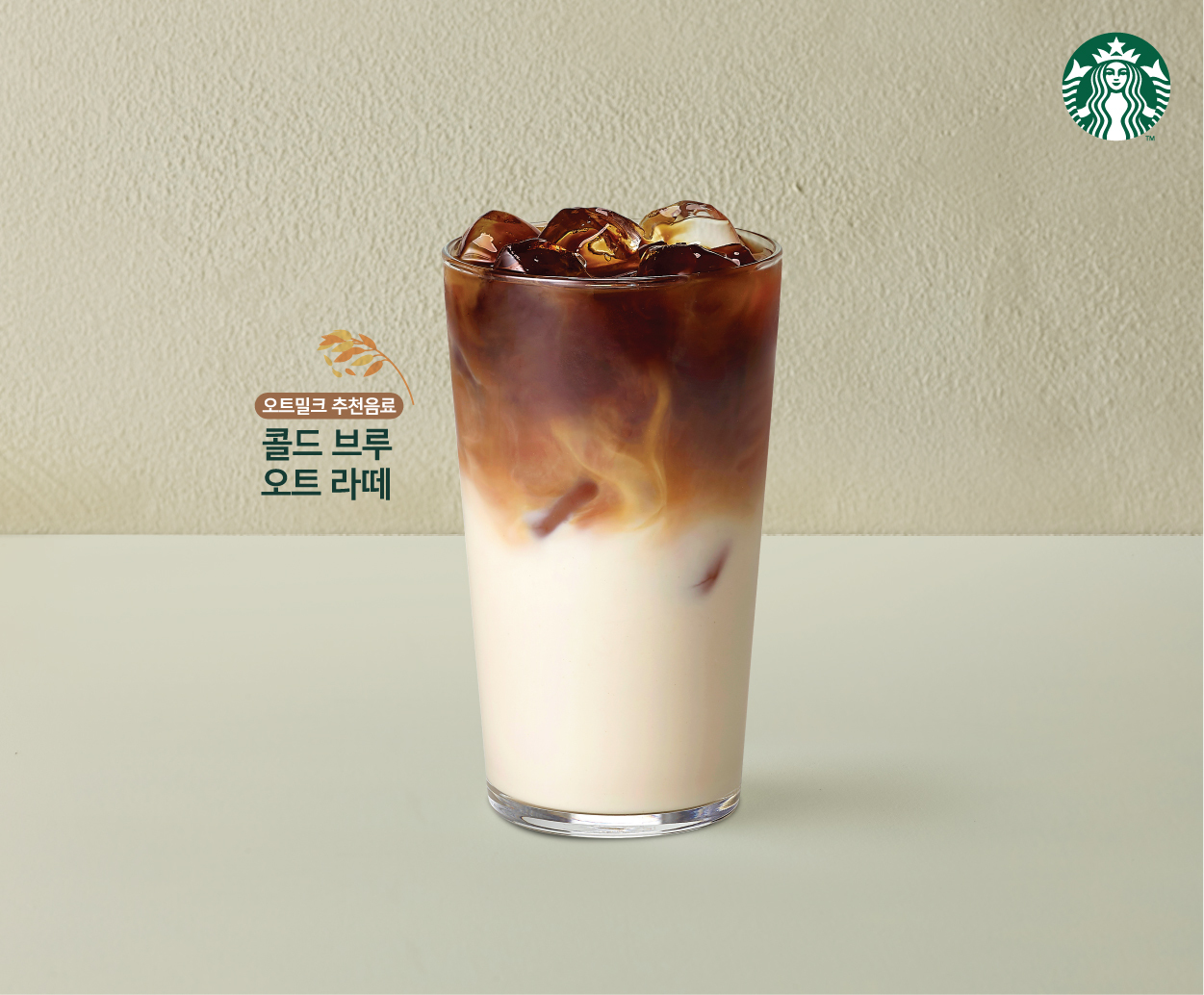 Cold brew oat millk latte from Starbucks (Starbucks Korea)
Korea’s largest coffee chain by market share, Starbucks Korea, added oat milk as an option on the menu in September. In the first month after the option was added to the menu, more than 200,000 oat milk drinks were sold, the coffee chain said.

Oat milk is also gaining traction among small independent coffeehouses, according to Dongsuh Companies, the importer and distributor of Sweden-based Oatly, one of the most popular oat milk brands globally.

“Among various channels we sell our products to, we are seeing huge demand for Oatly coming from independent coffee shops, with some 1,000 specialty coffee locations using Oatly in their menus” explained Song Yong-kag, a marketing manager at Dongsuh Companies.

Song added that Oatly is not only being used in coffee drinks, but as an ingredient for other products like chocolate, bread and even sauces at vegan restaurants.

Industry insiders predict the market for oat milk will expand further in the future, with more Korean consumers choosing to make value-conscious consumption and an overall drop in the population drinking dairy milk in the country.

According to market watcher Euromonitor, the local market for oat milk expanded 420 percent from 2016 to 2020, reaching 43.1 billion won last year.

Meanwhile, amid oat milk’s growing popularity, there is ongoing dispute between oat milk providers and some in the dairy industry on whether oat milk could be considered “milk.”

“The dairy industry believes that the word ‘milk’ should only refer to something that is made from cows. In that sense, oat milk should be called a ‘plant-based drink’ not a milk,” said a spokesperson for Seoul Milk, a co-op of local milk producers.

“But the market for milk alternatives is definitely growing in Korea and the dairy industry is keeping a close watch to changing consumer trends.”