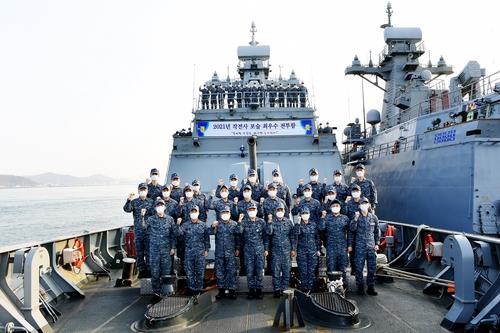 The frigate of the Third Fleet Command based in Mokpo, 410 kilometers southwest of Seoul, won the title after it passed final gunnery competitions that took place from September to October, the officials said.

The competition to pick the top gun vessel has taken place annually since 1988. They are meant to boost combat ships' ship-to-ship and ship-to-air capabilities.

"It is a result of teamwork among sailors who stand united," Commander Kim Min-jae of the frigate was quoted as saying. "We will carry out the tradition of winning in any fight while maintaining combat readiness."

In the submarine category, the 1,800-ton submarine, Yun Bong-gil, took the top post, while the Navy's 631st Squadron got the title for the aviation segment.

The awarding ceremony for all categories will take place at the end of this month. (Yonhap)