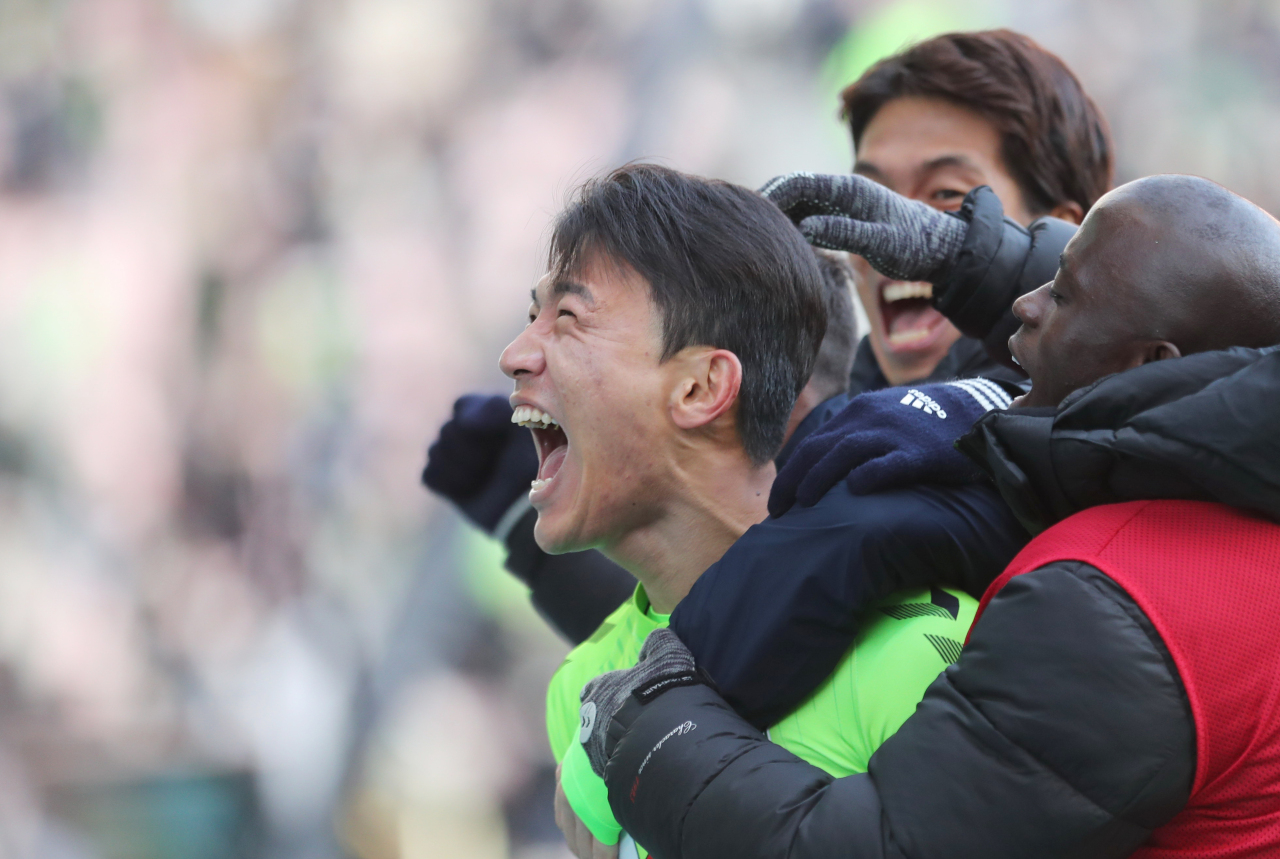 Han Kyo-won of Jeonbuk Hyundai Motors (L) is mobbed by his teammates after scoring a goal against Jeju United in the clubs' K League 1 match at Jeonju World Cup Stadium in Jeonju, some 240 kilometers south of Seoul, on Sunday. (Yonhap)
Jeonbuk Hyundai Motors have now gone where no South Korean football team has gone before: they became the champions of the K League 1 for a record fifth straight season Sunday.

Jeonbuk clinched their historic title with a 2-0 victory over Jeju United at Jeonju World Cup Stadium in Jeonju, some 240 kilometers south of Seoul, finishing with the league-best 76 points.

Ulsan Hyundai FC, the only other team with a chance to win the title in the top league Sunday, blanked Daegu FC 2-0 but still finished two points back of Jeonbuk.

Jeonbuk have now claimed nine championships, more than any team in league history, which dates back to 1983. They're also the first team to win five consecutive titles, and no team has won more than three in a row.

This was the third straight season in which Ulsan finished in second place behind Jeonbuk. Ulsan haven't won a title since 2005, and they extended a dubious league record of most runner-up finishes to 10.

Jeonbuk entered Sunday leading the league with 73 points, two ahead of Ulsan.

Jeonbuk could have claimed the title with a draw. A Jeonbuk draw and an Ulsan victory over Daegu FC would have knotted the two rivals at 74 points. But Jeonbuk held a substantial edge in the first tiebreak category, goals scored, at 69-62. Under this scenario, Ulsan would've had to score eight more goals than Jeonbuk on Sunday, not impossible but highly improbable.

The only way for Ulsan to take the title outright would be to beat Daegu and have Jeonbuk lose to Jeju United on Sunday.

Both matches kicked off at 3 p.m. Ulsan took the lead in the 18th minute on Seol Young-woo's goal and doubled their lead just before halftime on Oh Se-hun's header.

Jeonbuk and Jeju were scoreless in the opening 45 minutes, giving Ulsan at least some hopes of a dramatic final-day rally.

But Jeonbuk finally broke through in the 54th minute, as Han Kyo-won pounced on a rebound after goalkeeper Lee Chang-geun couldn't corral Choi Chul-soon's header.

Takahiro Kunimoto sent Song in alone on Lee with a gorgeous feed from midfield, and the substitute forward made no mistakes for his 10th goal of the campaign.

Jeonbuk's head coach, Kim Sang-sik, reached the top in his first year in charge, after having been an assistant for the previous seven seasons.

Jeonbuk and Ulsan had been neck and neck most of the season, but Jeonbuk jumped out in front with a 3-2 victory over Ulsan on Nov. 6.

Ulsan made things a bit more interesting 15 days later, when they beat Jeju United 3-1 a few hours after Jeonbuk had lost to Suwon FC 3-2. But last Sunday, Jeonbuk went up by two points following their 2-0 win over Daegu FC and Ulsan's scoreless draw versus Suwon Samsung Bluewings.

Ulsan came into the season with a vengeance under new head coach Hong Myung-bo and appeared to be a stronger squad on paper than Jeonbuk, who had lost some key players from the 2020 championship team, including the league MVP Son Jun-ho, now with the Chinese club Shandong Taishan.

But as Ulsan stumbled in October, Jeonbuk crashed through the opening and didn't look back.

The two-pronged attack led by Gustavo and Stanislav Iljutcenko, who had 15 goals apiece, helped Jeonbuk lead the K League 1 with 71 goals in 38 matches. They also had the stingiest defense, conceding only 37 goals, and centerback Hong Jeong-ho, one of four MVP candidates, was the rock on the backline. (Yonhap)